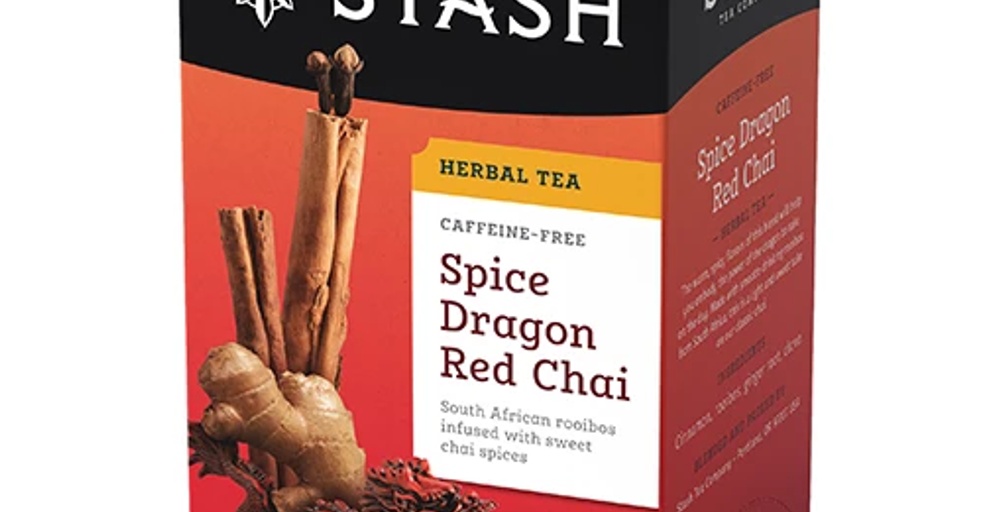 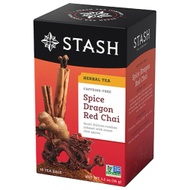 Get your senses ready. We’re about to surprise your taste buds with both the smell and flavor of this tea. It’s yet another primo example of Stash Tea doing what we’ve set out to do: brew boredom out of the world! We dare you to take a sip of this uniquely sweet and spicy chai and tell us it’s boring.

You’re probably aware of the growing popularity of chai tea lattes. But you might not yet be aware Rooibos, the herbal ingredient we blended up with our chai spices. Pronounced roy-boss, this South African caffeine-free herb is also known as red tea. Red tea is really having a moment because of its mellow flavor and perceived health benefits.

I would really like a good rooibos chai and this is mediocre at best. I don’t really need to be buying more tea myself until I drink down a bunch of stuff I already have. Still mediocre tea is a bummer. This has a lot of cinnamon and clove but I wish it had other chai spices too, especially ginger and cardamom. I’ll probably still be looking at the box of this for the next 5 years at the rate I am drinking it. ;)

The spices are nicely blended, but it’s just missing something… it’s like the bottom just falls out towards the end of the sip. I fear the rooibos isn’t a strong enough base, leaving the chai feeling kind of thin. It gets better as it cools, though. The ginger comes out to play and there’s a touch of sweetness to compensate for the weak base.

Overall – meh. There must be a better non-black-tea chai out there. I wouldn’t refuse this if offered, but there are a lot of bagged teas I would choose first.

I had snagged these at the local Christmas Tree Shoppe when I was crafting my Christmas Tea Gifties. The tea bags were inconsistent through the box. Some were strong with cinnamon and others heavy on cardamon.
Today’s mug was heavy on cardamon and it’s the last of it. I won’t be purchasing it again. I sweetened it up with a drop of honey and enjoyed the warmth on this snowy day

One of the simplest tisanes-called-chai I’ve had, consisting of only cinnamon, red rooibos, ginger and clove. I really enjoy the cinnamon but it’s all I taste. Some rooibos in the undertone and maybe clove but I’m not sure. No ginger to be found. So it’s basically cinnamon tea with rooibos lending some color.

It is nice to have a cinnamon tea that doesn’t get a strong sweetness and all its flavor from cinnamon oil or flavoring. A little sweetness builds up while I sip the cup; a mild spiciness lingers with the cinnamon taste. There’s nothing glaringly bad about this cup and I am enjoying it for what it is, though with a name like Spice Dragon, am I wrong to want more from this?

This is tea 4/50 I bought in a Stash Assortment. Since I am not a huge chai fan, the weak taste was less of a problem for this tea. Mediocre tea not enough body.

I received a box of this for Christmas last year, and I didn’t love it, so I gave most of it away. I have two bags of this left, so I figured I’d use it up. I feel like you can taste the cinammon, ginger, and clove all quite well. I’m not sad that I have only a little of this left, but it’s not the worst. It gets more bitter/tangy as it cools. Hot, it’s decent, but don’t let it cool down too much!

I can barely taste the ginger. Tastes like warm water. bleh
Thats steeping for 3-5 min.

I’m not usually a fan of Chais, so I’m surprised that I found this one to be one I would drink. Based on other reviews, it seems some of what it’s lacking to make it a chai favorite for others is probably why it’s one that I do enjoy (I am not a fan of teas with a strong ginger flavor).

Not a tea that I would drink plain, as I find most chais to be, but with a bit of honey powder and milk, this makes for a nice alternative to what I regularly drink.

There’s a small ‘spicy’ flavor, but mild, again, to other chais I’ve had.

Again, not a favorite, but, likely, one I enjoyed at a low enough price point that I’ll probably keep a box on-hand for those nights where I’m craving something a bit different or for company.

This has a lot of cinnamon that tends to stay on the tongue. However, it is missing some depth to it, the name implies so much more or maybe I built this one up in my head I am not sure.

Don’t get me wrong this was a nice cup of tea for me today considering it is so bitterly cold out and I always look for a chai to warm me up, it certainly did the trick. Just nothing to rave about.

Love this tea! At first I wasn’t a fan and found the flavour very mild and bland with just one bag. I now brew it in a pot with 2-3 bags for a minimum of 7 minutes. Add a touch of sugar and milk for a delicious, creamy tea latte.