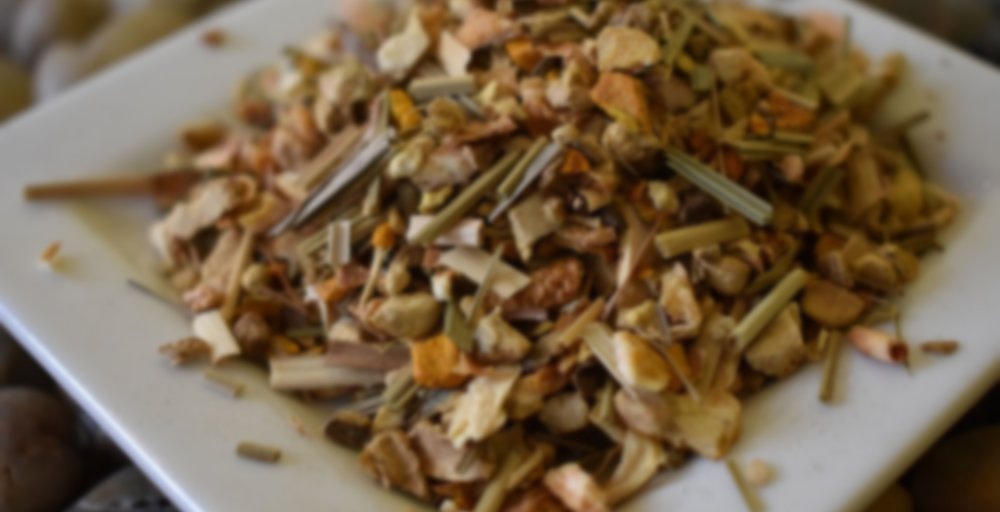 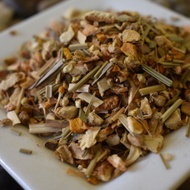 by Snake River Tea
79
You

Blended to aid your body with inflammation, this herbal tea has Turmeric Root, Ginger Root, Lemongrass, Lemon and Orange Peel, as well as Licorice Root. Brews a spicy but smooth cup, without any artificial flavoring

This is apparently a house blend from Snake River Tea. I was worried it would be way too spicy and actually questioned why I decided to buy some of this; I put some in Todd’s tea advent calendar last December and his review claimed it wasn’t very spicy at all. I was still hesitant, since most of my friends are far less “spice sensitive” than myself, and often they’ll say something is a “3” and then I’ll taste it and find it more like a “30.” I’ve been using my stash to make ginger rice whenever my migraine nausea has been particularly intolerable, and it’s been really awesome for that; basically I’ll just drop a teabag in my rice water as the water is coming to a boil, then my rice soaks up the tea and has a nice gingery flavor which gives the white rice a little more flavor; both rice and ginger are rather easy on the GI tract so it’s been a go-to when my gut is having none of it. I’ll even pick up a bit of the citrus notes in the rice, too. But I figured before I use up all the tea making rice, I should probably try a proper cuppa, too!

The tea smells spicy, gingery, and citrusy. Surprisingly, it isn’t overwhelmingly spicy, as turm/ginger blends so often are, so I’m happy about that! Todd was right, this is a Sara-spice-wuss-safe tea! There is a mild earthy/pepperiness from the turmeric and a stronger ginger flavor that I find rather soothing on the back of my throat and settling on my nauseous stomach. It’s warming, but doesn’t leave an obnoxious afterburn like many ginger teas tend to do. There is a strong lemon citrus presense in the tea as well; I can taste the herbaceousness of the lemongrass, but it is blending well with the citrus of the lemon and orange peel which seems to be rounding it out into a fuller, nicer lemon flavor so it doesn’t come off as really grassy/hay-like, which overly lemongrass or strongly lemongrass teas can tend towards. Overall, I am finding this a rather nice blend. I think this makes a good throat/stomach soother.

Not so much. Still very much in the mourning process and my apartment won’t honor a doctor’s request for a new companion animal so I’m currently busy looking into home ownership because living alone is taking a toll on me. Will probably be some time before I’m active on here again.

Ack, I’m sorry. Home ownership is something to look forward to though. I hope it gets a little better for you soon!

The leaf smelled strongly of ginger and turmeric.

The turmeric and ginger are pretty balanced in the beginning of the sip, while I taste licorice root at the end of the sip. The taste lingers a bit after the sip, mostly the licorice root, but it doesn’t burn. This is milder than I thought it would be, with all the delicious spices. But it is strong enough that I’ll bet it would work great as a latte too.

Usually turm/ginger teas burn my mouth to pieces. Does the licorice really balance it that much? Huh! I haven’t tried this one yet!

Try it! Not a hint of burn for me… so perhaps a slight burn for you, but shouldn’t be bad! That TeaCrush ginger that was too much for you, I could really detect the kick, but enjoyed it. This one should be up your alley.

The Turmeric Ginger Pear Teacrush I was fine with (my favorite!), it was the Cayenne Pepper one that was too much for me! That one was… hoo boy, ya. Tea Chai Te has a turm/ginger tea that I can only drink if I infuse it directly in coconut milk, not water!

Oh that’s right. I mixed them up.