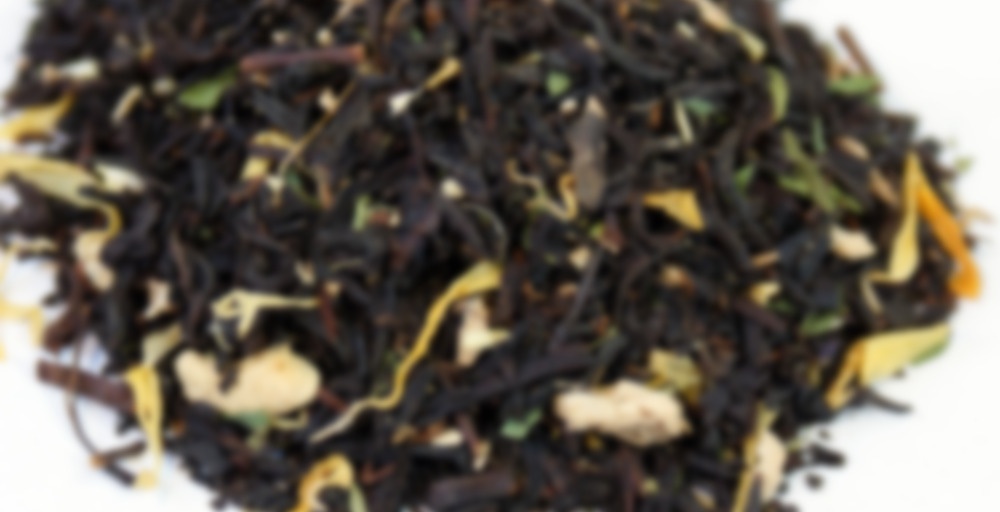 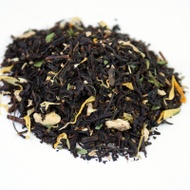 The subtle taste and aroma of pears is paired with the warm flavor of ginger root. The resulting blend brews to a deep amber cup that is fragrant and fruity with light ginger undertones.

When I opened the bag of this tea, I was greeted with the most amazing pear smell. I had been expecting ginger to predominate (given that S&V has a pear black, and ginger is first in the name here), however given that one of my “quests” is to find a great pear tea, it wouldn’t bother me in the slightest if this was more pear than ginger!

The aroma of the brewed cup is true to the dry tea… and crazily enough, so is the flavour!! (I say crazily enough because how often does the flavour actually match the aroma?! Not nearly enough, IMO.) Ohhhhh man, this one is good, guys! If you like sweet pears? BUY THIS TEA!! The tea leaves a lingering pear-flavoured sweetness in your mouth which is absolutely divine. I’ve gotta admit that my hopes have been far exceeded here, and the likelihood of me placing another order from S&V in the far-too-near future are rising. I’ll admit that it’s a little on the perfumey side, but then again, so are pears. The perfuminess does remind me a little bit of the Violet tea I just drank, so perhaps it’s a flavouring component.

Oh… and there’s no discernible ginger here. So if you’re looking for ginger pear, I suggest you either add your own, or buy a different tea.

ETA: Prior to the second infusion, I sniffed the infuser basket and definitely smelled ginger, which also was noticeable in the brewed tea alongside the pear. My guess is that a) the strong pear flavouring masks the ginger in the first infusion and b) perhaps the ginger needs a bit more time to infuse into the cup?? Either way, this second infusion, in half the water, was quite pleasant!

I can’t even remember if this was on my lifeppst of things…likely nt but ill happily steal a sample :)

Wow, pear..Sounds amazing, as I’m not a huge fan of ginger :)

Nopers, neither of you had it on the list (I looked last night out of curiousity). I’ll definitely bring samples though!

Vortegne – if I were you, I’d probably stick with the plain pear tea if you decide to order, although the ginger is definitely not prominent here!

That sounds amazing, although I would probably add some ginger as I like mine zappy! Ginger pear is one of my favourite tea flavour pairings.

I love ginger and pear, this sounds absolutely delicious to me :D

I really wish there was more ginger! The pear was so delicious, I think it could be amazing!

Mmm I might have to place an order and try some of S&Vs pear teas, looks like they have a few of them, and you could always add in some fresh ginger to see what happens!

Yeah – I’m really kicking myself for somehow missing the flavoured teas with bases other than black!! I see there’s a pear green – that could be amazing…

Mmmm yes it’d be so light and fresh, I need a good pear tea, I haven’t started the hunt yet..but it might have to begin here :D

Yes – as long as the green base is a good one! I would love it if Stacy @ Butiki used something like her Organic Huangshan Mao Feng to make a pear tea…. that could be amazing. DavidsTea’s Sencha Pear has a nice flavour, but it’s quite finicky, and not pleasant if at all oversteeped. Butiki’s Exotic pear, which I’ve gathered is being discontinued, contains anise (or another related flavour), and I couldn’t get any pear from it. Caramelized Pear from Art of Tea, I think, is a good pear-flavoured rooibos, but I much prefer actual tea bases.

I’ll have to check those out! I’ve been adding a bunch of Butiki teas to my cupboard so I imagine an order to them will occur in the near future :) , I should check out the DavidsTea one for sure too as it’s local, haha, like I need more teas though!

This one’s a little more ginger-y than my first cup so that’s nice. I like seeing how the actual presence of ginger impacts the tea. I really like how the two flavours come together in this tea. Still on the look out for a delicious pear (found grapefruit, now i’m on to pear!). This is probably my favourite so far.

Try the Caramelized Pear from Art of Tea if you haven’t – that’s my favorite :)

haha Kittenna received some of that in a swap from Azzrian so she’s saving some for me to try. :) I think we’re also going to try the green pear from S&V at some point too

Yeah, the art of tea’s caramelized pear was tasty, as I recall. It’s been awhile since I had it though.

The more I drink this, the more I like it. It really is one of the nicer pear teas I’ve tried. While the pear flavor’s still strong on the second steep, the ginger actually manages to peek through a bit more. As in, I can actually taste it now, rather than just smelling it.

Bumping up my rating a bit, because it’s better than I initially thought it was.