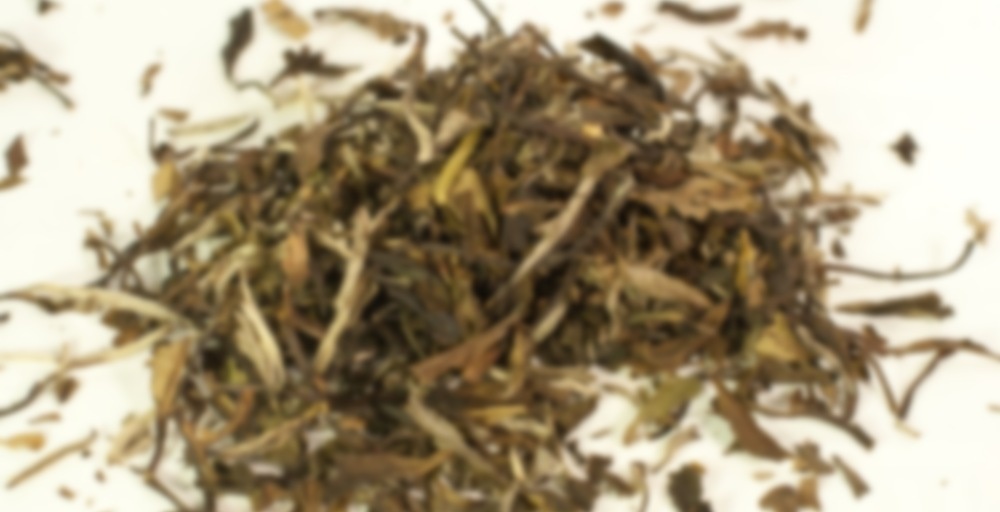 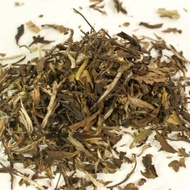 Pai Mu Tan White tea blended with pear and kiwi. All the cool kids are drinking white tea for the antioxidants, but we drink it for the fantastic flavor. We blend Pai Mu Tan white tea with pear leaves and kiwi flavor for a fruit-filled delight This tea lives up to the hype, full of flavor while maintaining a light taste.

My Shui Tea order arrived today. It’s my first experience with that company so it’s rather exciting. The closest I’ve come to them before is having their Moscow After Hours recommended to me. (Yes, I also bought some of that. It was my primary reason for placing an order, as a matter of fact. This one was the bonus) So I was adding them to my cupboard, on two different tabs because Steepster is a slow-poke, and when I came back later to see if they had been added, Steepster had opened a post window on this one. Well, that decides which one to try out first, then, doesn’t it?

There was one small detail, by the way, when I opened the envelope and checked the contents. I really rather liked the personal touch of the handwritten in blue pen “I hope you will enjoy this. Cheers, Jim.” on the packing slip. (Jim being the founder of the company) I’m aware that he probably does that routinely to all his customers, but it does rather make a person feel like a Very Special Customer.

Secondly, on a more amusing note, the two pouches I had bought came wrapped in a piece of silk paper, which had taken on some of the aroma of the two pouches. Apparently that is super-interesting smell if you’re a cat. I had to take it away from them as I didn’t really fancy sweeping up microscopic shreds of paper from all over the lounge…

The dry leaves smells very fruity. I can detect both kiwi and pear in it, but I can’t for the life of my decide which one I think it smells most like. Kiwi, I think. No, pear. No wait, kiwi. After steeping it’s the exact same problem. Kiwi, but pear, but kiwi, but pear. A pear-y kiwi. Or possibly a kiwi-y pear. It’s like whole new fruit really. The tangy, stabby, sharp notes of the kiwi and the rounded, juicy, soft flavour of the pears. (I’m thinking those big yellow pears here, the ones that you have to eat quickly or you’ll have torrents of juice running down your arms. Impossible to eat in a civilised manner)

Oh my word, this is rather nice! I’ve had a similar flavoured white before, although that one was kiwi and strawberry, and I remember being concerned about the fruit flavouring overwhelming the delicate white tea. I can’t actually remember what I thought of that one at the time, only that I needn’t have worried. Neither is there any need for worry with this one.

In the flavour I’m finding primarily pear and then the kiwi tangyness on tops and edges, framing the flavour. Underneath all that there is still the unadulterated nuttyness of the white leaves. And you know something, Steepsterites? These flavours and this tea, they suit each other so wonderfully.

I’m glad I bought some of this, only if it’s only a sample. A large sample, but still a sample. I can see myself coming back for more of this.

I MUST order from them. Their black ruby tea is exquisite.

I dithered on the black ruby, actually, mostly because I was taken in by the name of it. Eventually decided against it. I made orders three different places that day, so I reckoned I didn’t need to try everything in the first go.

I received a surprise sample of this in my recent order from Shui Tea. (Thanks Jim!)

When you first open the package, you get a full-force fruity fragrance. (OK, how often does an alliteration actually work out?) It’s completely true to its name. The pear isn’t readily discernible, but the kiwi is definitely there. Together, it’s almost like a mild strawberry.

From a taste perspective, I think what took me by surprise is that the white tea flavor actually predominates and the fruit notes are in the background. Bai Mu Dan (at least to me) is so mildly flavored that any additions often shadow the tea. Either this white tea is of superior quality or Shui Tea got the blending just right here.

From my tasting notes, you can tell that I’m really into big, bold flavors. However, I really liked the true tea flavor of this blend. This would be really good with a light dessert.