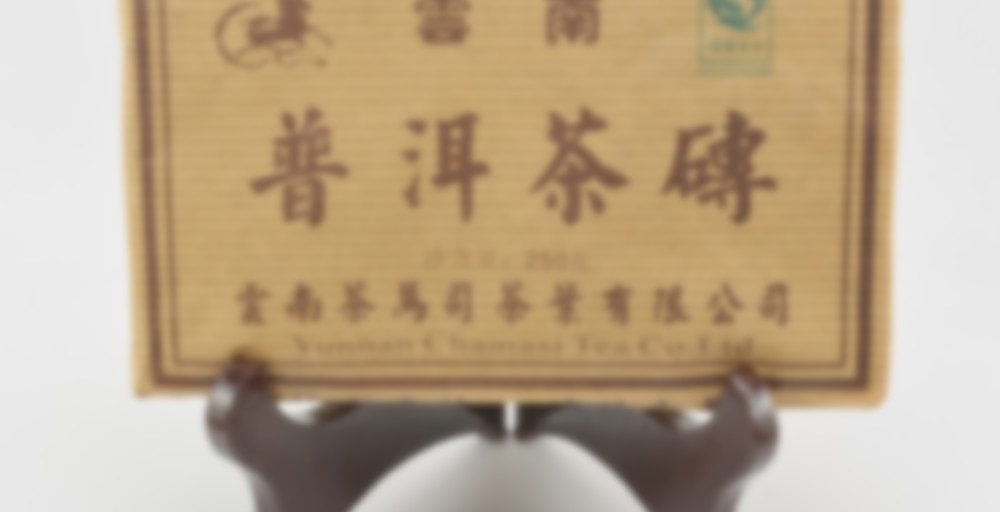 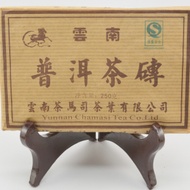 by Seven Cups
--
You

The nickname for this brick, “Number 7,” comes from two points in its production: The year of its pressing (2007) and the large (size-grade seven) leaves that make up much of its blend. The modest amount of aging on this large-leaf cake is already yielding very smooth and clean infusions with remarkable endurance. An economic choice for those who enjoy the richness of shu puer but not the strong earth or “fishy” smells associated with young tea

This shu puer brick was pressed in 2007 at the historic Jing Gu tea factory using maocha from two counties of Lin Cang: Yong De and Zheng Kang. A small amount of leaves from Feng Qing county were also added for aroma. The leaves in its recipe are larger than average (size grades six through ten) and required a wo dui fermentation period that is longer than average to ensure that these large leaves were thoroughly ripened. The result is an example of the sweeter jujube date flavors you would expect in large leaf shu puer.

The production site of this tea, the Jing Gu tea factory, was founded in 1900. During the period of planned economy and collectivization from 1949 until the early 1980s, the Jing Gu factory was well know in Yunnan’s tea industry for two reasons:

1. Officials at the factory defined the leaf grading system that was used by all puer factories during the planned economy.

2. It was the very first factory in Yunnan to produce puer tea compressed into rectangular bricks.

In the decades of the planned economy, just a handful of large government-run factories operated by aggregating leaf material from surrounding growing area. The most famous of these factories (Menghai, Xia Guan, Kunming, etc.) are still common names among puer tea collectors. A grading system established at the Jing Gu factory determined precisely what price these government factories would pay for precisely what size of tea leaf.

The government factories tended to specialize in certain kinds of tea. Xia Guan, for example, was the primary producer of tuocha. By 1969, the Jing Gu factory found its own niche as the producer of puer brick tea. The brick shape was new to puer tea, although it was not new to tea makers in China. Puer tea makers had traditionally compressed their tea into the round shape known as “qizi” or “bingcha” or compressed tea into the bowl-like tuocha shape. The Jing Gu factory adopted the brick shape in 1969 after receiving an order to produce and deliver tea to the border regions of China — Tibet, Xinjiang, and Inner Mongolia. The rectangular shape was chosen because it was readily stacked and easily shipped for a long journey. After this point, the Jing Gu factory specialized in brick tea up until the end of the planned economy. The number 7 brick seen here is a continuation of this tradition.

Our supply of No. 7 Bricks was stored in the Cha Ma Si tea company’s Jing Gu warehouse until we procured them in 2015. This storage space is climate controlled (Temperature below 75 degrees Fahrenheit with humidity below 60%). It is thought that the microbe climates of different warehouses are responsible for different flavors. We’ve noticed that the eight years in the clean and dry storage of the Jing Gu warehouse has purified the earthy flavors of this tea, further developed its sweet aftertaste, and brightened the ruby color of its infusion.

Seven Cups is an American tea company based in Tucson, Arizona. We source traditional, handmade Chinese teas directly from the growers and tea masters who make them, and we bring those teas back from China to share with people everywhere.