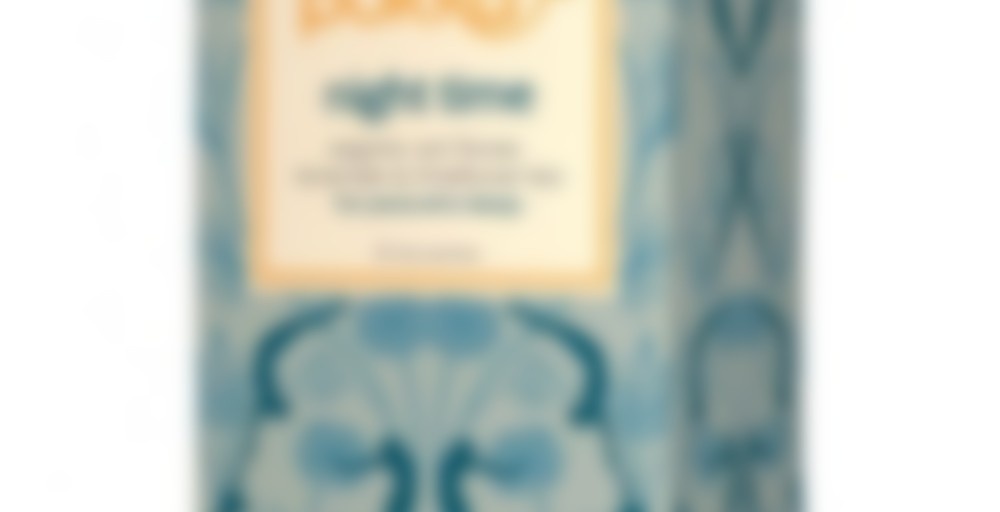 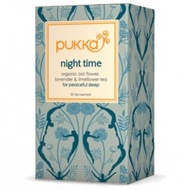 Night time tea is a sweet, mellow blend of herbs to help calm, ease tension and nourish the nervous system to enable peaceful sleep and give you a more refreshed awakening.

This tea is an elixir of the gods. The licorice gives it the sweetest flavour, successfully masks the bitterness of the valerian root, and pairs perfectly with the oat flower. You just get a hint of the chamomile and lavender, just enough to know that it’s there, and my goodness is it ever nice to fall asleep to! I just wish I could drink this all day long. I can’t wait to try more of Pukka’s blends.

Going to bed, so this must be appropriate.

Having a little trouble drinking this tea, but not because of the taste.
One of the cats are practically following the mug around the table.
Must be something like catgrass in the tea?

The tea has a nice yellow color. Oh… wait a moment… the other cat is coming now.
Rubbing herself all over the teabag – Thank you sweetheart, I wanted to reuse that one!

Anyway, my first impression of the tea is a strong smell of lavender.
The second impression was: …Hmm it taste like lavender too. It has a faint taste of liquorice, but it’s very very faint.

Tastenotes:
It’s bitter and sweet at the same time – like dark chocolat.

I really like this tisane! I realised that I might not be sleeping too well because I was drinking too much tea at night. I now drink this and love it. Warming, calming, relaxing. I’d highly recommend this.

(Upped my rating for this as it remains one of my favourite non-tea teas! – great for evenings!)

Someone at work gave me a box of these teabags because I was talking about my difficulties sleeping. I see that I didn’t add them to my cupboard, but nevertheless this is a sipdown.

As night time teas go, this rather pleasant. It doesn’t have a lot of flavor, but that’s part of why it’s pleasant. Who wants to be thinking about flavors, good or bad, if you’re trying to go to sleep?

I notice the licorice, but it isn’t strong, which is fortunate because I don’t love strongly licorice tisanes. None of the flavors I would have though would make me dislike this — valerian, tulsi, even chamomile if not well done — are individually discernible, or even discernible at all, really, which is also good. I have no idea what oat flower tastes or smells like, but I am guessing the milder grainy flavor comes from that, and I don’t notice the lavender continually, but it comes through some of the time.

Did it help me sleep? Probably didn’t make much of a dent as my sleep problems are pretty well established by now, but I can’t discount it having a small effect. I have also been trying to cut down caffeine, exercise regularly, not eat too late, meditate, etc. so with all of those causes, who can say what is causing any effects — I am finding it easier to fall asleep, but I still wake up multiple times during the night.

I probably wouldn’t drink this just for fun. It’s better than a purely medicinal drink, but something about the psychology of the name would make me view it as a sleep aid.

At some point, I might get more. Really depends on the state of the cupboard and the fact that I have so many other non-caffeinated options at the moment that I need to pare back.

I only realized it was a blend intended to help to go to sleep, when I read other reviews here ;-) I had it now, as later on I will change tea for wine and champagne (even in these circumstances, we need to celebrate what we still can and have to cherish)…and so far, I´m not really worried about falling asleep before roasting lamb for our Xmas Eve dinner.
This blend has a rather long list of ingredients, some of them in rather large proportions (and others which tend to overwhelm on their own), but the whole is balanced. Very easy to drink, tasty and although it´s a gentle taste, the finish is long and quite strong (licorice?)… nice, and worthwhile to stock in the future.

The ingredients list on this one is so smart! Oat flower, licorice root, chamomile, lavender, lime (linden) flower, Valerian root, green Rama tulsi. One of the nicest-tasting and most effective bedtime blends I’ve ever tried (and I have tried many!). It’s slightly sweet without being cloying and has a nice, bready mouthfeel. Doesn’t taste like candied soggy hay, which many chamomile- and- licorice- based herbal blends run the risk of, IMHO. I didn’t get much of the lavender or Valerian, which is OK with me, as those can be overpowering too if not balanced correctly.
I was already pretty tired when I drank this, but I was out like a light within 15 minutes of finishing this cup. Pretty good for a bagged grocery store tea!

I have this one but have been afraid to try it since I really didn’t like my last Pukka blend. Might have to have a cup!

It’s pretty inoffensive! More at risk of being boring than icky, in my opinion.

You know the rule with valerian. Don’t do it. Do not smell the dry bag.

Pukka managed to gloss over the foul-footed valerian with a thick, sweet varnish of licorice. It’s tolerable for me, that licorice. Medium intensity. Some oatstraw creaminess floats around. Chamomile is there I guess, demure as it usually is. Lavender wafts in mid-mouth and lingers lightly with licorice into the finish. It’s certainly not a lavender-forward blend. Can’t speak for the tulsi and limeflower.

It puts me to sleep but it’s not soothing for me. It’s something I have to gulp down.

I think my valerian sleep blend is extremely fennel heavy. I don’t taste or smell it against the fennel-wall, heh.

What’s that blend? Something premixed or did you blend it yourself?

It was called Sleeping Beauty but I got it from an “out of business” sale by American Tea Room. I haven’t had a chance yet to delve into if they were wholesaling it and if it is still out in the ether somewhere.

The tea bag smells pretty bad, so I was worried. Actually, this tea tastes good. The primary flavor is chamomile with a slight sweetness from the licorice at the end of the sip. I’m having a nice time tasting this warm, but I can tell it would be great cold. I wish I could taste the lavender, but I can taste hints of indistinguishable other herbs. I have only a single tea bag of this, but I would totally grab more if I had the chance to get it for cheap. It’s always nice to have a tea of this variety around.

I’m always up for trying a new sleep tea, and this one jumped into my basket last time I went to the supermarket. I had some success with Twinings’ new Sleep Superblends, but it did give me crazy dreams (as does Bird & Blend’s Dozy Girl). They’re both effective, but I’d like to find one that works without bizarrely vivid dreams as a side effect.
I suspect I’m not going to enjoy the flavour of this one particularly, since it contains liquorice (basically my nemesis). I don’t necessarily think flavour is the most important factor when it comes to sleep teas, though, so I’m willing to overlook a degree of unpleasantness/strangeness if it works. If it tastes nice, it’s a bonus! This one also contains flowering oat tops, chamomile, lavender, limeflower, valerian, and tulsi. I suspect it won’t be particularly effective for me based on past experience with similar ingredients, but I’m willing to give it a decent chance. The efficacy is something I’m going to have to comment on in a future note, though, since I don’t know yet how that’s going to work out.

In terms of flavour, it’s actually more palatable than I thought it would be. The liquorice is there in the background, but it’s not too obnoxiously sweet. It does linger a bit in the aftertaste, but I can perhaps overlook that if I try really hard. It’s certainly a very herbal tasting blend, as these things so often are, but it’s reasonably gentle and really quite soft tasting compared to some I’ve tried. Possibly it’s the oat? It comes across quite…milky and starchy aren’t quite the right words, and oaty isn’t descriptive enough, but perhaps you know what I mean? If I manage to work out what I mean, I’ll be sure to let you know.

The chamomile and lavender are present mostly in the mid-sip, adding a mildly floral sweetness. There’s a hint of earthiness, too, but on the whole it does well to disguise it’s more pungent ingredients. No one thing really dominates, which is good in some ways (there are a lot of ingredients in here that would never make it on to my favourites list), but basically means that it just tastes confused. It’s not particularly cohesive, and not particularly tasty, but it’s not bad – and not bad is much better than awful in my book.
I’m going to rate this one around 60 for taste, since I don’t mind it – I should probably have my own scoring scale for this kind of blend, since I have different expectations and I tend to be more forgiving of flavour if it works well – there are more things at stake than enjoyment, after all. I definitely wouldn’t drink this one for pleasure, but if it helps me sleep – I’m there! I’ll probably increase my rating a little if it actually does, but I guess we’ll see about that over the next few weeks. I’m not put off so far, though!

I like a cup of tea before bed, this fits the bill. I am not a big fan of chamomile, this is heavy chamomile, the good news is that it also tastes and smells of licorice – which for me, is a favorite.