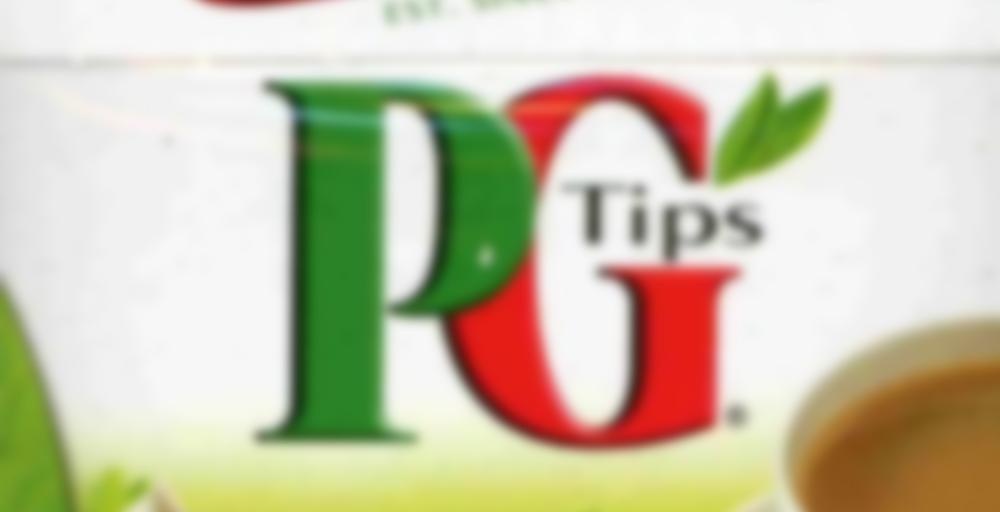 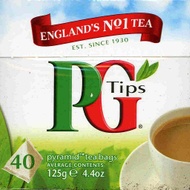 with 63 Ratings Rate this tea Rate This Tea

“Do your bit, put the kettle on.”
One of the best English teas. Gives Tetley a run for its money. Pyramid tea bags and the quintessential English breakfast tea taste. Cheers.

Most mornings, I make a big pot of tea and split it with the husband. But our tea tastes differ on a few big points, the biggest being smoky teas. Recently, we picked up a few bagged teas for him to have on the days I want something smoky – I don’t have to ignore my lovely lapsangs and he doesn’t get tortured by them, so it’s a win/win. I decided that I wanted to sample and compare two of his teas – the PG Tips and the Yorkshire Gold – because really, why not? So that’s what I did this morning. The brewing parameters were identical – one teabag, 6 oz, 4 minutes in a preheated cup, first taken plain then with a bit of sugar and half & half. Of course, this will result in two tasting notes so pardon the repetition.

First up, PG Tips. Out of curiosity, I weighed the bag. 3.2g. ROT, are you paying attention? Popped it in the cup, brewed it up. It’s a lot darker than the YG – I can’t see the bottom of the cup at all and it looks a tad cloudy. The smell is nutty, starchy and a bit flat – very similar to YG’s but a little earthier. Without additives it tasted pretty much liked it smelled. Solidly chewy, a little nutty and fairly flat. It had a bitter aftertaste that made my mouth feel sticky but I was pretty much expecting it to given the fact that it is a bagged tea and I brewed it for so long. Adding sugar and half & half made it taste a bit cardboard-y – not in a bag way but not exactly the cleanest cardboard either. Still ends up fairly flat and one-dimensional but that can be tempered a bit by adding excessive sugar, artificially creating a rounder flavor with the added sweet note.

Ultimately, not really an impressive tea but that’s not surprising. The main points this tea has going for it are caffeine content and a nice weighty body which means it’ll do the job as a morning tea and, as long as enough sugar and half & half has been added, won’t be horrid. Though part of me feels bad that I’ve been making the husband drink this.

I’ve been fighting a bad head cold the last couple of days….this tea has saved my life! lol The 5 or 6 times I spend with this tea a day makes the cold almost bearable. It’s like a nice warm blanket.

yeah its a decent standby to have when anyone down and out, I certainly would love to have or two of PG any day. Great tastes and generous quantity that won’t be to off putting unlike some brands. Well, hope you get better buddy and might I suggest something medicinal like Chai, now it may sound to cliche but it will surely be the best bet in fighting the cold while enjoying something medicinal like. I always hated the taste of medicine in childhood , to me chai can be a lifesaver no more Robitussin just chai. lol

Thanks Anthony for the chai tip! Can you recommend any brands?

any brand will do, nothing specific thats up to you. Just curl up to a chai cuppa and kickback and relax…nothing beats tea and some R&R. Hope you get well soon and drink on!

Well, I went safe and tried the Twinings chai….much better than I thought it would be! I can already feel my sinus’ getting better…

twinnings blends some mean chai tea blends as with Numi, well at least the sinuses are clearing up being stuffed up behind the ear in all is quite annoying..alot of flem :(

PG Tips has a powerful flavor that’s lacking in the high end, and too much harsh astringency. It’s a bit like listening to a band made up of timpani players, with one or two of them also bashing on the cymbals. Not particularly complex. As others have said, be very careful not to over-steep it. Carefully made, it’s an acceptable cup, but with so many great other choices out there I’d only drink it if there weren’t much else around.

No wonder I like it…I was a percussionist in high school!

There seems to be 2 other names for this same tea on Steepster. One thing I found interesting was that the rating was 78 on one of them and this one was 66. I guess people tend to go to the one with the rating that is closest to what they had in mind, so people rating this tea positively go to the other one while those who didn’t like it come to this one. There must be a psychological explanation for this.
Anyways, enough rambling. I just got my first PG Tips(240ct) that I ordered from eBay, at a very cheap price too. Shipping took forever, but it’s quite worth it. Comparing it to the Twinings English Breakfast, I think it’s slightly better in respect to flavor, scent, strength(brews up darker), etc. Maybe the pyramid shape actually does help the tea to be brewed better. I also found the taste to be very balanced, and I’ll certainly be more sure of this once I have this straight. I think I’ll be enjoying this for mornings and mornings until I run out and get some more. No wonder this tea is the best selling brand in England!

Add: This tea is definitely made with the common tea drinker in mind who adds milk/cream and sugar to their tea. I tried it without milk once and it just wasn’t as good. I guess teabags do have their limitations, but it is still a fantastic tea with milk added.

It might not be the world’s fanciest tea, but for a bagged black tea nothing beats it. It really is England’s no.1 tea for a reason. Strong, tasty, full bodied. This is an every day tea that really sums up the British.

I’ve been drinking this for my whole life and no other bagged tea comes close. And a word of warning – the PG tips in Canada isn’t the same blend. PG Tips in the UK is a full bodied black tea blend including Assam tea. In Canada (and some parts of the US) it’s simply a weak, flavourless Ceylon tea. Definitely not the same thing.

Be SURE to brew it with fully rolling boiling water, not any of the “just boiled” water you often get in N. America for English Breakfast. It really is the only way to get to the good flavour and not end up with something weak and flavour-less.

Ahhh PG. You may not have the quality of some of the better loose teas but with a bit of milk you are the perfect accompaniment for dunking ginger biscuits.

Back to the basics this morning. A nice little reminder of the difference between of bagged and loose tea.

It’s always nice to be reminded of that every now and then.

Yes that reminder helps me realize that loose tea is the way for me.

This tea is popular in England because it’s cheap. Among the standard builders’ teas (like Tetley, Typhoo) PG is normally the cheapest. I’m surprised some of the reviews here praise this basic tea. Being immune to the charms of coffee, I have about 2 thousand cups of these brands a year (milk no sugar). But I’ve given them up in search of a finer tea (which brought me to this site). I find Twinings Original English Breakfast, and Yorkshire Gold, a good step up. Both are more aromatic and without the bitter aftertaste.

a real solid tea drinkers tea. also a good backup if you run out of coffee. prepared with milk and honey.

reminds me of the hotel I stayed in outside of Windsor, England. milk and sugar please.