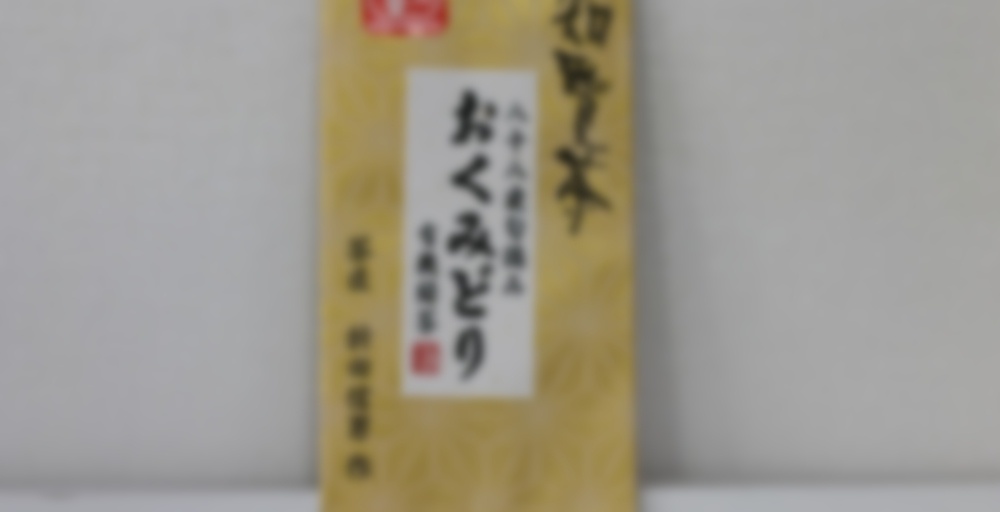 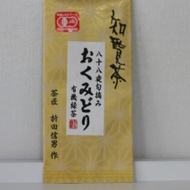 Tea has been painstakingly cultivated Hachijuhachiya knob to the “Okumidori” tail special varieties of organically grown tea plantation is surrounded by more than 20 years of forest around the new tea leaves of the knob was able this year. Is a gem of safety and security.

Found this at a local Nijiya market. They carry mostly organic green tea, and while I don’t usually seek out organic, it is nice to compare it. So far, I don’t think organic farming (for Japanese green tea) has reached the standard for flavor/etc. that non-organic has, but maybe (even hopefully) that will someday change.

As far as I have learned, the okumidori varietal, that this tea is made of, is usually for shaded teas, as it has a more distinct sweetness. Because the packaging is entirely in Japanese, I had no idea whether it would be an asa- or fuka- mushi, and I hoped it would be the former, but guessed it would be the latter (coming from Chiran, Kagoshima, and all the teas I’ve seen coming from there are super deep-steamed).

When I opened the tea, I found that I had guessed correctly. While I wanted a light-steamed tea, it was nonetheless interesting to consider what this varietal (which I’d never had before) would give being deep-steamed.

Anyway, I’ve experimented with a few brewing parameters, but found brewing it more like a gyokuro to have the most satisfying effect – for the first steeping, using between 140F – 150F for 1min 20 seconds.

In previous brewings (using a higher temp and shorter steep time), I found that the second steeping always had an overly strong vegetal quality that wasn’t balanced by sweetness, bitterness or any other flavor.
Using this more ‘soft’ approach, I found it to have a very nice sweetness at the end of the sip, and a delicious aftertaste that increases over time.

Unlike some fukamushi senchas that are strongly fired for the roasted aroma, this one seems to have been simply dried, which is why I think the sweetness of the okumidori can come through. I am no expert, but it probably doesn’t need to be as deeply steamed as it is.

This is a decent quality sencha, which I upped a bit, because it does come out very nicely when brewed at a low temp for a longer period of time, which seems maybe unusual for a deep-steamed sencha.