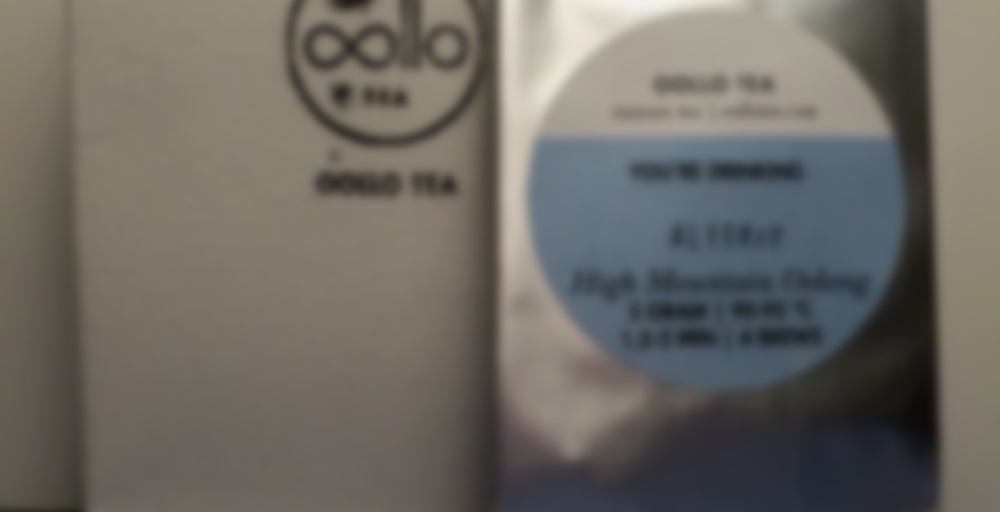 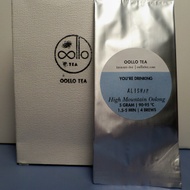 From the world renowned Alisan Mountain comes the unpretentious high mountain oolong. The Alisan family farms tea trees that were bought from our family in 1990. They practice zero pesticide natural farming.

This has been my transition tea the last 2 weeks between the morning and late afternoon and I’ve really enjoyed it, like all of the other Oollo teas I’ve tried. It’s namesake is Alishan Mountain in Taiwan. This high mountain tea has a lovely crisp grassy flavour and elegant flowery aromas. I’m reminded of spring buds blossoming with each sip, a nice image on this chilly day here.

It’s been far too long since I’ve sat down with a Taiwanese wulong. So I began digging through my teas and was fortunate to find this one.
Lovely floral bouquet that gave me flashbacks of dewy spring mornings. Initial vegetal aromas lead to an almond skin nuttiness. Bit of hair perm solution
Later was getting more of a buttery roasted coconut smell
Fairly light in body with a pleasant astringency.

Things never go as planned, that is what I have learned from life, no matter how hard you try to stick to them they frequently go poof! Turns out I won’t be moving til the first of next week at the earliest, probably closer to August 1st, which makes sense but it annoying because as soon as I packed up almost all my tea gear I was given this news. At least by the time I move this super annoying summer cold (really they are the worst) and the nasty heat advisory will be over, trust me on this, I have moved over a dozen times in my almost 30 years, moving during a stupid hot day with a cold is a nightmare! But hey, life is change and it is best to just go with the flow and things will happen as they should, no need to stress…I just really hate summer colds.

So, it is Oolong time! Specifically Oollo Tea’s Alishan High Mountain Oolong, yes, time for some Taiwanese Oolong from over 2,000 meters above sea level on the Alishan Mountain range, lots of fog, mist, and cool temperatures to make for an awesome tea. I have had several Alishan Oolongs and all of them I loved, but when do I not at the very least enjoy an Oolong? So, aroma, the nice, tightly balled leaves starts off with gently toasted notes and a touch of something starchy, like a blend between cooked rice and tapioca. This moves to sweet cream and then a touch of gentle floral notes, it smells delicious, a bit faint, but delicious.

Into the bat gaiwan the leaves go for a nice happy steeping. The aroma of the wet leaves is a powerhouse of yum! Notes of spicebush flowers, lilies, toasted sesame seeds and a sweet starchy note that to most people smells like baking bread and a touch of rice (to me it smells like destroying angel mushrooms but I am a weird fungophile who goes around sniffing mushrooms, and no, I never eat them because mushrooms are best as photos and study subjects) the starchy notes mixed with the floral notes really are killer, I just love them mixed together, it is why I enjoy Alishan so much. The liquid is so floral! Only a touch of sesame and starch notes remain, now it is mostly lily, hyacinth, orchid, and honeysuckle, it smells like a conservatory in my cha hai.

Ah, that is creamy, so very creamy! Spicy too, that delicate floral and spicy note of spicebush blend with hyacinth (which is also a little spicy) and dianthus (which is like spicebush but not as musky) blend really well with the creamy notes from the initial sip. The finish is a tiny touch of sesame seeds and rice pudding. This might be one of the best first steeps I have had in a while, very full bodied and sweet!

The aroma of the second steep is a blend of flowers and gentle toast, a bit of sesame seed blended with a bouquet of spring flowers, lots of lilies, hyacinths, and spicebush. The mouthfeel matches the initial sip, creamy! Sweet cream and flowers kinda explode in my mouth, more definite floral than spicy floral this time, lilies and honeysuckle with a touch of hyacinth. The finish is a gentle touch of sesame seeds and rice, not so sweet as the first steep, with a lightly green vegetation aftertaste.

Third steep’s aroma has a hint of vegetation, growing things and crushed leaves along with flowers. Hyacinth, honeysuckle and lily, with also a touch of orchid, no real sesame notes or spicebush in this steep’s aroma. The taste takes its cues from the aroma, the first note that shows up in my mouth is gentle vegetation, crushed leaves and a touch of lettuce. It tastes like tea leaves but without that slight bitterness that the unprocessed leaves have. This moves to gentle floral notes and a nice finish of mineral with a lingering floral aftertaste.

For blog and photos: http://ramblingbutterflythoughts.blogspot.com/2015/07/oollo-tea-alishan-high-mountain-oolong.html

Check it out. I not only brewed a cup of tea, I added it to the database, whilst and at the same time writing my first blog post in a couple weeks. And now a review on Steepster. Go Me!

So, this Alishan oolong dry keeps its secrets to itself, with only a slight dried field scent with some corn notes also present. Once steeped the leaves try to convince this is a roasted oolong but it is definitely not. The cup is clear yellow-gold with a hint of green. The first sip while hot is a touch spicy. It is both icy and hot. That quickly disappears, followed by light floral. The floral present here is not an overwhelming presence. What you get is a solid flavor with out an assault. I noticed the aftertaste lasted a good long time.

There is no bitterness – though I never expected there would be, and no latex type taste late in the sip as many oolongs can have. The colder it got the more I personally liked it.

Unrelated – have you tried the Lemon Bar Frappuccino at Starbucks? There is no tea (or coffee) in it so I won’t add it to the database here. I really must try to make this at home. It is way too expensive for my wallet. It is lemon aid, milk, vanilla, and tons of sugary syrup. I had mine with 2% milk and sugar free vanilla syrup. I left off the whipped cream and sprinkles. Anyway so very fun, decadent, and delicious. Two thumbs up on taste. Two thumbs down on $4.25 for a 16 oz drink.