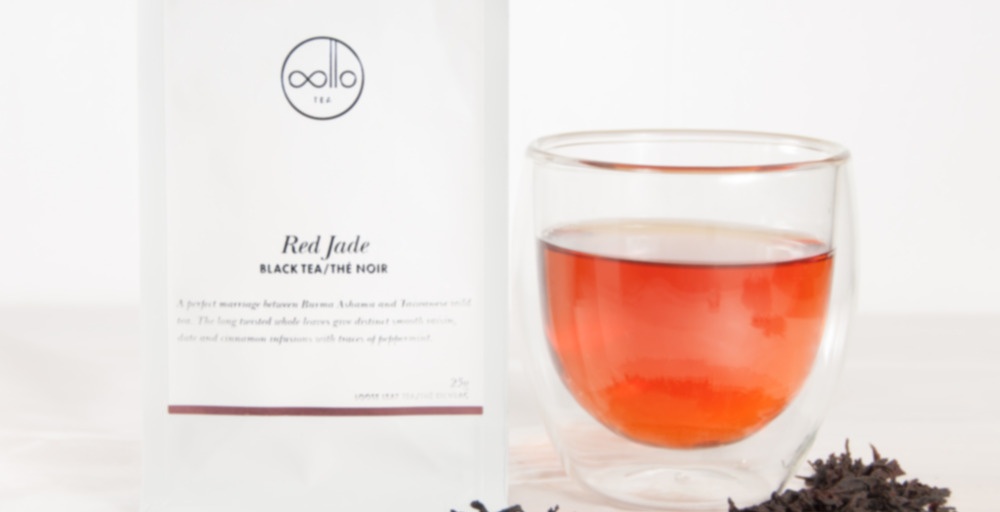 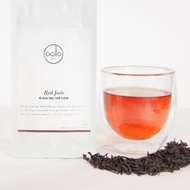 Had a sample of this Oollo tea from the Vancouver Tea Festival that I brewed up today. It has a really nice earthy aroma to it, and a very clean and crisp flavour. It’s aptly named as the liquor is a lovely reddish hue. Although I’m usually more partial to flavoured black teas, this was quite pleasant without any added ingredients. I didn’t detect the cinnamon, date or peppermint flourishes myself, but they are listed in the description for the tea. Quite a nice way to appreciate the elegant flavour profile of a black tea without the complicating added ingredients I’m used to. I think I have a new respect for it.

I saw a talk about oolong teas by Jenny Lo yesterday, and had to pick up a couple teas to try. They had some 10g sample sizes, which made me really happy… although I possibly should have bought more of this one. It smells SO GOOD!

I’m just steeping till it “looks right”, so the first was about 30 seconds or so.

My frog army is enjoying the taste as well. ;) https://www.instagram.com/p/-ZRPqyx5Cs/

This tea is delicious. It’s not quite as sweet or honey like as I was expecting, but it is a really solid tea. At 30 seconds you get some sweetness, the maltiness, a touch of astringency. Yum.

The only cure for a tea hangover is more tea.

The third steep I accidentally steeped a bit longer, and I totally see what they mean about the minty finish. So tasty.

The weather yesterday was absolutely bonkers! A few miles from my house a tornado touched down, the sirens were going off like crazy, and the best of all, I finally got to photograph a tornado. Ok only kinda, I was able to get a good look at a wall cloud and it had a funnel starting to form, there was some glorious rotation and vortices starting to drop, but it zipped back up into the clouds, this happened a few times. One of those times it did not go back into the clouds but it drifted out of my line of site…and became the confirmed tornado touch down. I thought at first that maybe it was a scud cloud, but the definite rotation told me nope, I think the most eerie thing about it was the silence, lack of wind and rain, and lack of lightning. The sky was chaos, but down on the ground (at least where I was at) it was peaceful. Even watching the live footage of the tornado (because I am weird like that) it seemed unusually silent, but it made it more obvious…rain wrapped tornadoes scare the pants off of me!

And it looks like we are about to get even more storms! But enough about my obsession with storms, it is time for some tea! Today’s tea comes from Oollo Tea, their Red Jade Black Tea, a black tea from Nantou, Taiwan, and one of my favorite teas. I say that it is one of my favorites because it is just so unique in its flavor and aroma profile. Opening my sample I was greeted with beautiful curly dark leaves and a blast of unusual aroma. It manages to blend notes of fresh tomatoes (and a touch of tomato leaves) toasted peanuts, cocoa, menthol, pinto beans, and sassafras wood in a heavy, heady dance. In theory those notes together would smell off, but somehow this tea makes it work beautifully. Red Jade is immensely fascinating to me.

Brewing the tea is my green gaiwan really makes the leaves pop in contrast! The aroma of the wet leaves really pumps up the sassafras and menthol, along with cocoa and peanuts, with a touch of malt. It is unusual, the aroma is menthol, but not mint, it imparts that sharp tingle of mint without the actual ‘minty’ smell. The aroma of the liquid is fairly delicate, sweet notes of sassafras and tomato mixed with roasted peanuts and cocoa drift up with the steam.

The first steep is so weird but so good! It starts off a bit malty and brisk, the texture is smooth but there is a slight menthol like tingle. The taste starts off with notes of sassafrass and raisins, this moves to a slightly woody, cocoa, malt, with a finish of slightly sweet yams and a cooling menthol aftertaste.

The second steeping really sees the leaves unfurling to their full size, which is impressive! The aroma is strong with sassafras and roasted peanuts, with accents of menthol cooling and brisk malt, and a finishing hint of cherry. The taste is a powerhouse of flavor again, similar to the first steep with a smooth yet brisk mouthfeel, and a tingly menthol quality. It starts off with cocoa and sassafras woody sweetness, this transitions to yams and roasted peanuts, and the finish is a stewed fruit (primarily stone fruit) sweetness with a lingering menthol coolness.

The third steep is still going strong, the aroma is sassafras and roasted peanuts, the menthol notes are a bit lessened and the fruity notes are a bit more prominent. At the finish is a bit of malt and a hint of cocoa. The taste is still pretty intense, less smooth, more brisk, with an intense menthol tingle. The taste is almost all sassafras and fruit, sweet and woody, with a lingering coolness. I got a couple more steeps out of this tea, I wanted to get as much out of it as I could!

For blog and photos: http://ramblingbutterflythoughts.blogspot.com/2015/07/oollo-tea-red-jade-black-tea-tea-review.html

I have been pacing myself today. It is hard because I actually feel like me.

So, Oollo Tea, they are new to me. They specialize in Taiwan teas and are located in Vancouver, BC, Canada. This one is a black tea. It smells pretty tasty upon opening. Immediately malt. Then at first I think grape? I agree with Oollo that it is really more raisin and plum. Regardless it is fruity and delicious smelling. I also catch a baked bread aroma.

The taste is pretty much similar to the scent except there is a bite or spicy note late in the sip. Zero bitterness. Very easy to drink. Now, I’m pretty sure I wouldn’t have caught this had I not read the description, but a few times late in the sip I caught light traces of cinnamon and peppermint flavor. Not the spice like bite but more the candy disk like presence.

Thiiiis I like. The smell is deep, syrupy drop fruit; plummy. The taste is chocolate, caramelly, darkly fruity. It’s malty and a bit astringent, but definitely not bitter. It’s a very fragrant tea, and definitely an assam varietal (Burma).

Actually, I get what they mean by mint too. I thought it was a bit odd when I went back and read that, but there’s a sort of vegetable menthol flavour (definitely not the artificial kind).

While I was in the popup shop that sold these teas (the company sparked my interest enough for a Tea Adventure—they’re currently sold in a popup shop off Robson’s), the owner of the brand was working there and let me try an icecream that was made specifically from this tea. It was /delicious/ by the way. I wanted to buy a freakn’ tub of it, but there were only about three tubs made (very small-batch), so they were only selling by the scoop.