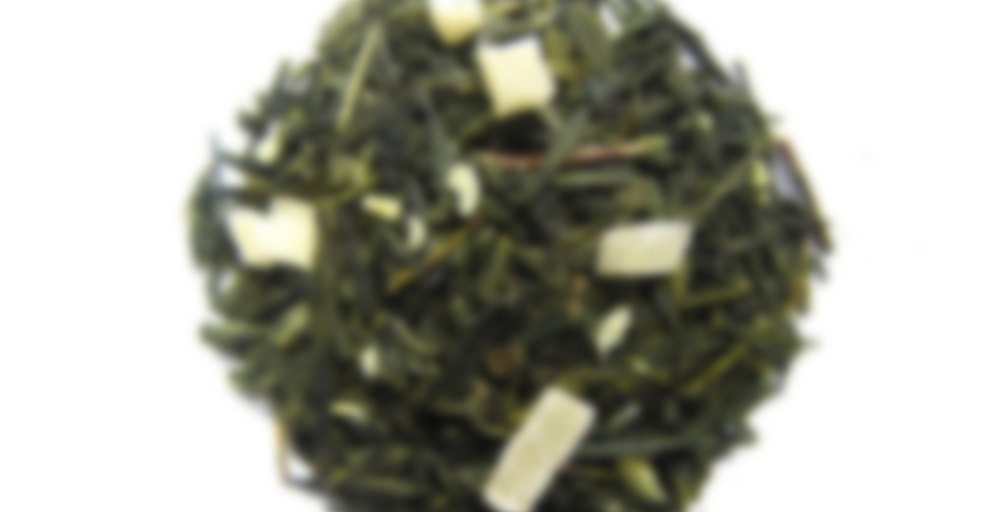 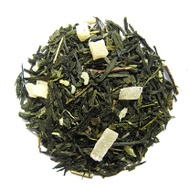 The magical combination of pineapple and coconut. This tea, with a hint of tartness, will pleasantly surprise you. An exotic blend that will satisfy all seeking enchantment.

Today was tea party day. My first student of the day stays for an hour and a half after her lesson to have a tea party with us before my late afternoon students come. As we were finishing her lesson and were about to go to the table I smelled a wonderful scent, like on Bugs Bunny when some enticing aroma wafts to him and turns into fingers to draw him near. What is that? Ah, it must be the coconut!

Indeed it was, and this turned out to be the favorite tea of the day. (We always have three and rank them.) Don’t be misled by the description. I think it says with a hint of tartness or something like that, but don’t mistake that for sour or astringent in the base. To me, the pineapple is very light and overall this is a smooth and creamy cup of tea. Granted, I had made homemade ice cream flavored with vanilla, almond extract, and chocolate chips as well as a chocolate cake with the boiled frosting that hardens, so perhaps if it were not paired with food the pineapple is stronger, but we loved it just the way it was!

I thought of you when I made the ice cream. Can you recommend any other add-ins for the ice cream that might be good with the almond flavor? Next I want to make coconut extract and have coconut ice cream!

I loved this tea!

Awesome! I love throwing tea parties for my students!

I wonder if some sort of cherry flavor would go nicely with almond. I think coconut and almond also sound so good together.

I also just wondered if you had more Penzeys Raspberry Enlightenment — I bet that would be good in ice cream w almond extract too. I am thinking about it because I made a stir fry sauce with it and am eating the leftovers now — so good!! (Raspberry Enlightenment, Sriracha, Soy Sauce, Rice Vinegar, Sesame Oil all put into bowl with wild abandon, mixed together, then thrown over stir fried veggies and noodles. Left over chicken thrown in last minute :)

I did think about just adding some sliced almonds – I LOVE them. I think white chocolate chips might be good, too, and the chocolate chips were really good in it and hubby liked it that way. Raspberry Enlightment – now there is an idea! I thought about chopped cherries, too. I have tons!

Wait a minute! I got to Penzey’s all the time, & I’ve never seen that stuff there! Obviously I’ve been missing out!

I like all these suggestions for Raspberry Enlightenment http://throwyourcaraway.wordpress.com/2012/04/17/feel-the-enlightenment/ !! Love Penzeys :)

It is good, isn’t it? I served it on leftover turkey and ham sandwiches after Christmas. I served it with “pigs in a blanket” – you know, Lil Smokies wrapped with Crescent Roll. It was the favorite dip for that. It is good with egg rolls and lettuce wraps, too. Sunny Paris is wonderful on baked potato, and their freeze dried garlic is awesome. I love it mixed with olive oil and their Tuscan Sunset seasoning.

Thanks to Laurent at Nina’s Paris for sending a sample of this tea!

I read ashmanra’s tasting note about it earlier, which spurred me to try my sample of it sooner rather than later. While the tea was brewing, I noticed a bit of a metallic aroma that screamed “oversteeped! astringent! blech!” to me… and the infuser had only been in the cup for about 15 seconds. Not good. I figured I’d keep at it and just hope for the best.

Good thing, because although that aroma didn’t really dissipate, it was joined by a delicious aroma of candied pineapple, and just a hint of coconut. Mmm.

I didn’t manage to drink any of this before it cooled completely (familiar story), but am drinking it now, and enjoying it more than I thought I would. The predominant flavour is a sweet sort of pineapple, which is really quite pleasant. It’s joined by a touch of creamy coconut, and some green tea notes… and unfortunately, a dose of astringency. It’s not all that bad, but given my careful infusion, I definitely hoped for less.

Now, I haven’t had a cup of DavidsTea’s Toasted Walnut in ages (bad bad bad, I probably have about 90g of it left!), but that’s what this cup reminds me of. I don’t think the pineapple is quite as prevalent in DT’s version, and the base, though finicky, isn’t quite as bad… but they’re pretty similar IMO. Perhaps I’ll have a cup of TW tomorrow or something to check.

Another cold brew backlog. Thanks again Courtney for letting my buy this from you!

I am LOVING this one cold brewed. Pineapple and creamy coconutty goodness! It almost has a marshmallowy quality yet is still totally unsweetened!

Sounds like something to try by the pool this summer!

I am made I wasted this sample because even with my lack of taste, I swear I am picking up the coconut. Not to mention that when I smelled this in the office, it smelled absolutely amazing! Okay, there is definitely pineapple in there too. I just really wish I could taste this properly because I have a feeling that it is really good.

Thank you Sophie and Laurent for this sample!

I love coconut. The dry leaf scent is coconut. The brew smells of pineapple. I hate pineapple. Going to be interesting seeing how this turns out. For as intense as the aroma is, the sip is much more refined and extremely tasty. Why did I doubt? I am pretty sure this is not what Nina’s was shooting for but this makes me think cotton candy at the fair. I love cotton candy at the fair, so that is high praise I think. I guess we all sense refined differently.

I just enjoyed the sample of this tea that came with my Nina’s order. It smells amazing! Like piña colada, which is what I assume they were going for. I wasn’t sure about the steeping parameters since it didn’t come with any, and I don’t drink that much green tea, but it turned out pretty good at 176 degrees for 2 minutes. The taste is pretty light, but I definitely tasted some pineapple and maybe some creaminess from the coconut. Not overpowering flavor, but pleasant, delicate. I think I would consider getting more of this tea. It would probably be delicious iced, as long as it’s not oversteeped. Thanks, Nina’s, for the sample!! (Btw, I had this with a mango cupcake…great pairing!)

I’m trying to drink teas without knowing what’s in them and see if I can pick out the flavors. This one seemed very floral and a touch creamy without overwhelming the base tea. Of course once I looked up the description and saw pineapple and coconut, it totally tasted like that instead. So yeah, that’s bias for ya. Either way, this is quite tasty. I don’t even like coconut teas, but the flavor is very subtle here. And there’s a nice tanginess too. Thanks to Laurent at Nina’s Teas for the sample.

Mmm…I adore this tea! The dry leaf smells fruity and sweet. The tea leaves are a lovely dark green and I appreciate how much TEA is actually in this blend. This blend is mostly tea with a sprinkling of fruit pieces.

Once it’s steeped, the tea smells much like the dry leaf, only more subtle. It brews a pale yellow-green (almost clear). The pineapple flavor takes center stage with delicate notes of coconut and grass in the background. The fruit flavors taste very natural and work well together.

I drank this tea hot with no additions. It’s wonderful that way, although I look forward to experimenting more with it as an iced tea and with sweetener.

I think this came from the monthly TTB earlier this year. I thought I’d reviewed this when I first got it, but apparently not. I just finished what I had of it. I enjoyed it. It was a mild green that was buttery and sweet. It was hard to tell what flavors came from the tea itself and what came from the added flavoring. I would definitely drink this again.

Last night I finished it off by mixing it with some White Peony. It made it lighter and softer with a hint of flowers. It was an enjoyable way to finish this tea.

Thanks to VariaTEA for the chance to try this sample.

This was the first Nina’s tea I ever tried, and I was definitely impressed. There was enough leaf in the sample for two lovely cups, but I will seriously consider procuring more of this to try cold steeping at some point.

In dry form, I couldn’t specify any scents I noticed, possibly as it’s been in my sipdown box for a while now. Brewing, however, I could pick out both the pineapple and coconut scents. It smelled super tropical, and I could barely wait to drink it.

I wasn’t actually expecting to enjoy this as much as I did – I’m not that big on green teas usually, and I’ve only found one pineapple tea I’ve enjoyed (Bluebird Tea Co.‘s ’Retro Ted’) although I love anything else pineapple. Having said that, I am obsessed with coconut teas, and can’t think of one I’ve disliked. In this tea, the coconut flavour is prominent at the beginning of the sip, and then as a creamy background note with the pineapple taking over. There is a slight grassiness from the green tea but it actually works well in conjunction with the flavours and isn’t as offputting as I usually find it. Everything works really well together, and I’m sad to see this tea go. Thanks again for the sample, VariaTEA!