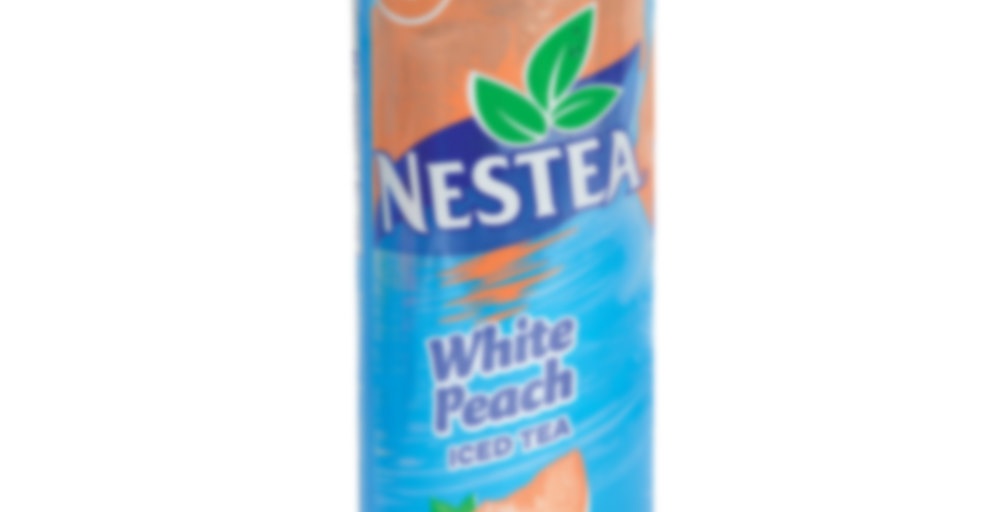 You can enjoy iced tea with the refreshingly bold flavor of a ripe peach. The bad news? Well, with just 45 calories per 8oz serving, there really isn’t any.

They were on sale for 88 cents, so why not try it out? There’s nothing much to say. It’s Nestea, and peach. Peach juice crystals. Really sweet but I’ve had much worse.

I just drank half of a 695 mL can of this. The whole can had 22mg of caffeine so I had to split it with someone. The peach flavour is good, but I don’t get a lot of tea flavour. No bitter/acidic notes from the tea though, which is nice. I also appreciate the 88 cent price tag. I find most iced teas are too sweet for me, but I actually don’t find this one too bad.

It is more of a fruit juice than a cold tea, though.

First iced tea of the year! I know it was a bad choice, but the return of the hot weather (and it’s REALLY hot today) caught me unprepared and I reached for the nearest cold thing. It happened to be this, from my parent’s Dolche Gusto machine. The thought also appealed because I’ve had a good few peach teas in the last week or so, and I’ve enjoyed them all, so continuing the peach theme…

This is okay. If you like ultra sweet, ultra artificial iced “tea” then this is perfect. I don’t, really. I mean, I like sweet things up to a point, but this one goes overboard for me. There’s also very little tea in here. It’s the right colour for iced tea, but you can’t actually taste it. I think it’s an “extract” rather than actual tea, given that the pod is full of some kind of powder and sugar, but as the main flavour is clearly supposed to be fake peach then maybe I should have expected that.

I can’t say this was enjoyable as a tea, but as a cold thing on a hot day it ticked one box. I’d not choose to drink it again, though. There are so many better things around.

NOOOO! WHY WOULD YOU SUBJECT YOURSELF TO THAT!?

Following my recent “I like white peach flavoured stuff” revelation I decided to break my Nestle boycott (if you want to understand why I’m boycotting Nestle you should take a look at where and how they get their bottled water) and try a can of this, and I just have to say that damn I regretted it so much.

Honestly, I should have known better because it’s fucking Nestle/Nestea we’re talking about but anyway…

This was just painfully sweet though; if you’d put a cup of this “tea” and a cup of the cocktail syrup from a can of peach slivers in front of me I guarantee I would not have been able to tell the difference. And that’s a bad thing. I get that Nestle sweetens their tea; I get that. If they want to appeal to the ‘average’ tea consumer they have to but there are limits!

Secondly, I should be able to tell – at least to some extent, that there’s real “tea” in your “iced tea”. I actually had to go to Nestea’s product page and look up the nutrition information to find out what kind of ‘tea’ this is – the Canadian nutrition label just reads ‘tea extract’ instead of listing the kind of tea. At least the American website listed black tea.

I’m just disappointed; less so in the tea than in myself. I should have known better.

What does ‘tea extract’ even mean? How do you extract tea? Do they just mean they put some tea leaves in hot water and extracted some brown tea-looking fluid? WHAT