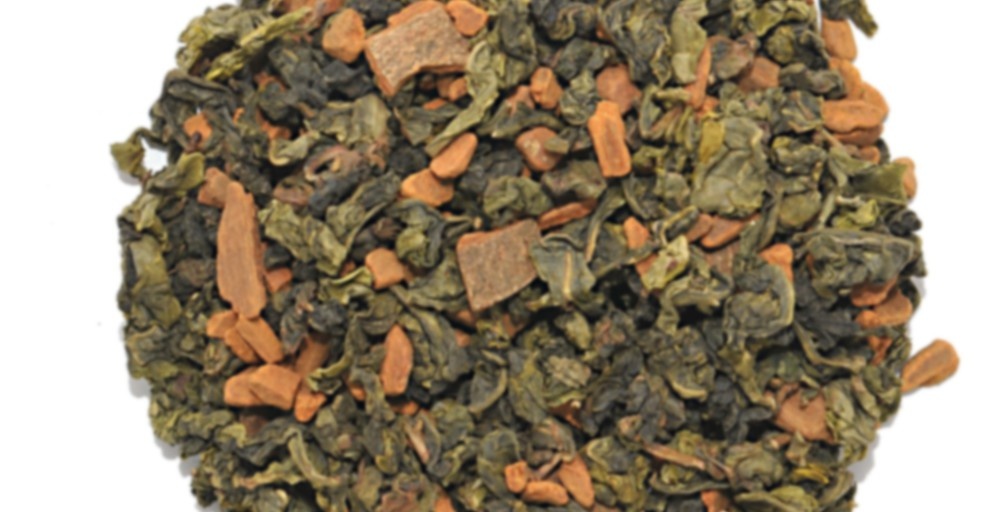 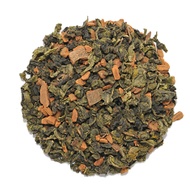 by Nature's Tea Leaf
86
You

Cinnamon Oolong Tea is an exclusive blend of select Oolong leaves with natural cinnamon bark. Cinnamon is a spice obtained from the inner bark of several trees native to the island of Sri Lanka and South East Asia that dates as far back as 2000 B.C. Normally used in sweet and savory cooking, cinnamon is lauded for its ability to aid in the reduction of blood sugar and cholesterol levels while boosting metabolism. Oolong is a medium level caffeinated green tea full of antioxidants and has a light floral aroma and long lasting finish. The combination of the sweet & spicy aromatic cinnamon with the mild floral Oolong makes for a delicious and refreshing drink that can be enjoyed both hot and chilled.

My internet is acting so weird. When I get knocked off my connection and I pull down the menu, I can tell that all the other people with comcast lost theirs too. Blahhh wind.

This tea left my infuser overflowing with leaves! Which actually is probably not a good thing but they seemed to maintain a nice gap for water.

This is really good. It’s floral, and spicy, and just what I needed tonight. A nice mix of sweet and spicy to keep you warm while you sit in bed trying to be warm, because you disagree with your thermostat on the temperature but don’t want to pay the bill for this disagreement. The cinnamon isn’t too strong, which surprises me given the bits of cinnamon stick in the tea. I love it.

I think I was a bit apprehensive about this blend when all the samples from Nature’s Tea Leaf came, but this is really great. I think I still have 2 others, I misplaced them but they are found now. I’m still missing a couple teas from other places that I wish I could find. But I’m glad I started off again with this one!

I am definitely going to put these leaves into water to cold steep overnight though, just need socks.

LOL I know what you mean about the thermostat, everytime I look at that thing I refuse to believe it is actually whatever it says. I can’t but think…but if it really is…..‘blank’ then why the hell am I still shivering my toesies off?! Though if your thermostat is near a lamp that is on, that might be throwing it off somewhat. Learned that the hard way.

My thermostat was installed right over my stove. Not my doing, I assure you.

lol….what were they thinking?! so many degrees of messed up.

I’ve been enjoying this over the course of the last couple of hours, it’s really nice. Nice and creamy with lovely notes of cinnamon. Very nice way to enjoy the evening.

A full review will be on http://sororiteasisters.com/ on the 20th
This is what I am calling the ninja tea as its buttery creamy goodness sneaks up on you in the aftertaste and lingers around as it wishes!
The cinnamon is well balanced and does not overpower.
I did not think I was going to like this initially but have been proven wrong!
What an unusual and wonderful blend!
Thank you Nature’s Tea Leaf for allowing me to try this!
Please see the full review on the 20th at 6pm est here http://sororiteasisters.com/

Everyone’s trying this one all of a sudden! I want some! Wahhhhhh :P

Girls I can get some into Indigobloom’s box – it won’t be much maybe a cup worth for both of you but I will get some in there!

Wow, did I ever even respond to this?! That’s so awesome of you!! I suck at replying!!

Another sample thanks to Nature’s Tea Leaf! I was really intrigued by this one: cinnamon and oolong aren’t a combination I think of as going together, especially not with the light oolong chosen for this blend. But it smells incredibly delicious, so so cinammon-y, and there’s also huge chunks of cinnamon bark in there! The bf looooves cinnamon, so I made him up a cup of this. Of course I sneaked a sip first though—and I’m going to be making myself a cup REALLY soon because this is so tasty.

The aroma of this once brewed is really POW in your face, powerful cinnamon. But like cinnamon sticks/bark, not dry cinnamon. It’s a small distinction, but since I bake a lot it matters to me. Dry cinnamon is more holiday bake-y whereas bark is more for everyday use—in fact, my favorite place to use it is in chili! Trust me, it’s delicious. With cocoa powder and coffee and chilies… mmmm. Anyway, back on topic. This tea also brewed up super pale, as I’d expect a light oolong to, so it was off to a good start.

Holy COW this is good! It’s got all the markers of a very nice light oolong: floral, a bit creamy, with natural sweetness and very nice vegetal notes. There’s a lovely cinnamon taste, obviously very natural tasting since it comes from bark and not just flavoring. Not, you know, that flavoring always tastes fake but I find with spices I like the real deal! And, amazingly, the oolong and cinnamon are a perfect pair. Spicy, sweet, sooo good. I could drink this all day long, what a winner! I really want to try it cold too, I bet this would be fantastic hot and iced.

EDIT: I forgot to update this yesterday, but I got 3 hot brews AND a cold brew out of the leaves! It is sooo good iced, I think the oolong is more prominent though the cinnamon is definitely still present. Upping the rating a bit since this is equally good hot and cold, plus you can get a ton of brews out of it which is always nice.

What a unique oolong! It sounds perfect for fall

ps can I come for supper next time you make that chili?

If there’s a Steepster convention, I will be in charge of the chili making so everyone can have some XD

Thanks to Nature’s Tea Leaf for this sample!

Upon opening the box and delightfully sorting through the contents, this was the first one I grabbed. After the utter decadence of David’s Creme Brulee, I wanted something a little bit more natural.

The dry leaf is all oolong and cinnamon stick pieces. Cool. It smells very much like cinnamon. I can’t smell the oolong too strongly, but that’s okay.

In steeping, it’s actually the opposite for me. I get a bit of woodsy oolong flavor with a hint of cinnamon, especially in the smell. I like it. The cinnamon doesn’t overcome the tea, but rather blends with it harmoniously.

I do love all the natural flavorings in Nature’s Tea Leaf’s teas. Not “natural flavors” but: my cinnamon oolong has big chunks of cinnamon bark in with the oolong tea – and that’s all. Using dried herbs, fruits, and flowers makes the flavors more real, but also often makes them blend better in my experience.

This is a green oolong, which I generally find buttery and floral, but a pretty light one. There’s a lot of cinnamon in the aroma, but the taste is well-balanced and, yes, buttery. therefore it reminds me of cinnamon rolls :D It’s not like eating a cinnamon roll – not sweet enough, also liquid – but it’s intensely reminiscent of one.

there’s a little bit of astringency or dryness when drinking – not enough to be unpleasant, rather it gives the tea some heft and character. There’s a lovely lingering aftertaste that has some of those floral notes I was expecting, and that were subdued in the scent and drinking taste.

ETA: On a second steep the cinnamon is less pronounced, but still present and adding a pleasant sweet/spicy richness to the oolong.

A huge thank you to Nature’s Tea Leaf for sending me some VERY generous samples! I’m honored you chose me! naturestealeaf.com

I was a bit curious how a cinnamon oolong would taste! I LOVE a good oolong. Opening the bag, there are some huge pieces of cinnamon bark in the bag… so big that I had to snap them in half to fit in my infuser! The oolong itself is gorgeous bright green leafy bundles.

First steep: 3 1/2 minutes
This definitely smells like cinnamon! It almost smells more like cinnamon than it tastes, but as it cools it tastes more like cinnamon too. The oolong for the first cup is delicious and DOES pair well with the cinnamon. It is one of my favorite oolong flavors: light, smooth and floral. The flavor is slightly vegetal yet very sweet AND there is even a slight hint of a fruit flavor, maybe peach? I haven’t tasted peach in an oolong before.

Second steep: 5 minutes
Still a lovely cinnamony scent and taste. The steep color is yellow. Now the oolong is a bit more peachy! Still not floral, but peachy! Yum! A flavor that really lingers! Cinnamon & peaches… seems like it should be a dessert of some kind!

Third steep: 7 1/2 minutes
I’ve found with flavored oolongs, the first steep has the most flavor that isn’t from the oolong itself, but with subsequent steeps, the oolong flavor itself keeps getting better. This had more cinnamon since I steeped it at a higher temp. The oolong is a bit buttery this time, less peachy! On my oolong flavor strength rating scale, in which one is light and floral and five is the strongest, I’d give this one a three. I really could keep re-steeping these leaves, but since I always steep a full mug, I can only drink so much tea! I think I need to get in the habit of steeping tiny cups so I can try a bunch more steeps. Nature’s Leaf sent me a huge sample, so maybe one day! This is very impressive!

I loved this one too! So unique, and really really tasty.

I am in love with this and it is a total surprise. Normally, I prefer spicy cinnamon, almost like red hots. Upon sniffing, I thought this would be that. It is definitely not, but it is something I have never tried before. The oolong is the primary flavor and it is really deep and rich, and the present but not overwhelming cinnamon make me think of delicious baked goods. Specifically, kind of reminds me of cinnamon bread. Mostly bread, with a hint of cinnamon. Weird, huh? Weirdly delicious.