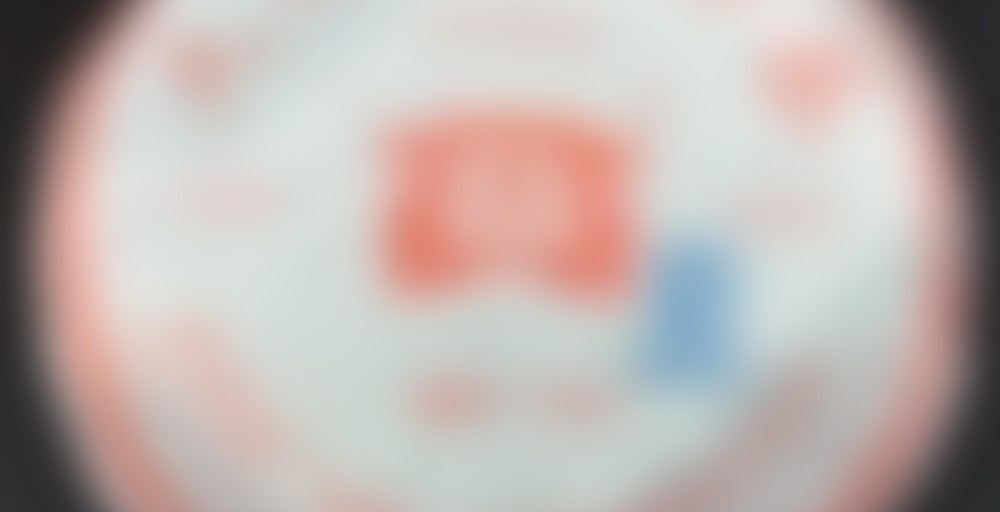 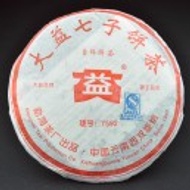 Smooth as a cake of this caliber should be. Delicious, easy to drink and doesn’t taste as ‘dusty’ as its age might suggest. A wonderful ripe cake.

Reminds me of how a vanilla Dr. Pepper might taste if it had no sugar.

My first Menghai, my first aged ripe, also only my third shu overall. The bing looks quite gorgeous in person and as the 9 in the recipe suggests the leaf size is quite impressive. This being my first factory production ripe, I was expecting a potentially heavier compression, but instead the cake turned out to be incredibly loosely pressed. The bing is notably thicker than most cakes of this weight and the backside isn’t even symmetric in shape/thickness. Prying leaves off without causing additional breakage was a breeze and a pleasure.

I brewed 10.5g of this tea in my brand new 160ml Jianshui clay teapot. I’ve only had one session with it before, so it should be noted that it may not be performing optimally just yet. I rinsed the leaves for slightly over ten seconds and allowed them to rest for ten minutes before I started brewing. I did a total of twelve steeps for 10s, 10s, 10s, 15s, 20s, 25s, 35s, 50s, 65s, 2 min., 4 min. and 8 min. respectively. The last steep revealed the leaves to be utterly spent. Overall the longevity was about what I’d expected, if not a tad better.

The first infusion was sweet, perhaps a bit earthy, and pretty smooth. Very typical base ripe pu’er flavors. It had a rosé color, whereas the rinse had an orange hue. Throughout the steeps the tea produced a remarkably clear liquor. The second steep was very dark and blood red. It tasted very smooth and clean, almost like diluted coffee. It wasn’t as sweet as before, but left a roasted coffee bean type of flavor in your mouth.

The third steep was again perhaps a bit earthy. It was sweeter than before, with an almost berry-like flavor. The tea was super clean and easy to drink. It also made me salivate a lot, which may have contributed to the almost honey-like sweetness this infusion nearly reached toward the end (in flavor, not intensity). The following fourth infusion was a step backwards, presenting very simplistic flavors and tasting very reminiscent of the first infusion with its basic watery sweetness. Steep five was more of this same typical shu taste, with a hint of those berries I thought I’d tasted earlier.

In steep number six I finally got much more of those berries and that infusion was quite nice. I’m bad with berries, but steep seven tasted like redcurrant juice or something to me. It was juicy, with maybe a bit of sweetness. Overall very nice. The eighth infusion was sweet, but the other flavors were seeming to start to taper off. The sweetness persisted in the ninth steep, but the tea soup was starting to taste watery.

The tenth steep I brewed much stronger and the taste I got was the same as the manure type of smell I smell in most ripe pu’ers. I don’t mind the smell, but as a taste I wasn’t the biggest fan of it. There was perhaps some sweetness, but not that much. Wondering if the leaves still had more to give, I doubled the steeping time again and the soup I got had a vanilla flavor to it. One could say there was perhaps almost a cherry note as well, which isn’t all that surprising as the two often go hand in hand. The infusion was quite nice actually and had a nice aftertaste as well. For the twelfth infusion I tried doubling the steeping time one last time, but the resulting tea tasted practically like water, sweet water. It tasted like drinking the remainders of a strawberry slushie where it’s just melted ice at the bottom of the cup with a hint of color and flavor from the strawberry. If you had a big bottle of it, it would be fine for quenching your thirst during summertime.

So what are my thoughts on this tea? I prefer teas that are interesting, dynamic and grab my attention. Therefore this tea was not very interesting to me in the first several steeps. It was only in the latter half that the tea started to feel more interesting. Even though the tea does present many different flavors over the course of a session, compared to other types of tea ripe pu’er does seem to present much smaller dynamic swings in my still quite limited experience, and this tea was no exception. It’s easy to drink and such an inoffensive tea you could probably serve this to anyone from children to elderly. They might not say they like it, but they are unlikely to say they can’t drink it either.

For me perhaps the biggest shortcoming of this tea is the lack of bitterness. I’m not saying other ripe pu’ers are necessarily known for having bitterness either, but toward the end of the session I really found myself yearning for some bitterness or something, anything, to give the tea some bite, edge and character. This was especially apparent since I’ve been tasting Yunnan Sourcing’s fresh spring 2017 black teas over the past few days and enjoying the wonderfully elegant kuwei in some of them. Those people who think bitterness is a bad thing need to drink more tea. A lot more tea.

Despite some of the criticisms I can find for this tea, this might be the best ripe out of the three I’ve had so far, the others being “The New Black” by Misty Peak and “Green Miracle” by Yunnan Sourcing. At the very least it most certainly proved that Menghai is definitely competitive when it comes to producing ripe pu’er. Had this tea been more interesting in the early steeps, it would have been easier for me to recommend. As it stands, it is a tea that is very easy to drink through the day without having to pay too much attention to it, but for the price there are likely to be many other ripes out there that are cheaper and possibly better. I’m not aware of what exactly age has brought to this tea, but I personally wouldn’t say that it is worth paying such a premium for the age at least in this case. This is not a price point I mind paying for a full bing of tea, shu or not, but you could get a pretty nice sheng for the same price.

My journey to find a shu that makes me fall in love with ripe pu’er continues. The next tea I review is likely to be a shu as well, but after that I may start to miss sheng. In any case I have many ripes in the pipeline for me to try out and with this new Jianshui teapot I’ll likely be drinking a lot more ripe pu’er on a regular basis. This tea made me curious toward ripes made from Bulang material and whether some of them retain some of that more fiery nature. Don’t be surprised if the next tea I review comes from that region…

This tea is like a dirt path leading up to a temple deep in the woods. It actually reminds me of Haruna Shrine in Gunma haha.

Rich and clean earthy flavors with hints of fragrant wood, faint incense, dark fruits, vanilla, and cocoa. Great throat characteristics and mouth feel with a smooth qi. I would love to get my hands on a cake.

@ pmunney, that is an exquisite description. I just had to sit and stare off into space for a bit after I read that.

This is an excellent ripe from 2005. Yunnan Sourcing says this was dry stored and I believe it. There was no taste of wet wood and no spice. There was a moderate amount of fermentation flavor left. It was there until about the fourth steep. This tea was sweet with little bitterness. There were some notes of chocolate in there and it developed a fruity taste in later steeps. This was not a cheap tea at $66 but was not horribly expensive either. This is in my opinion a classic example of a Dayi ripe cake that has some age to it. It could have been much more expensive.