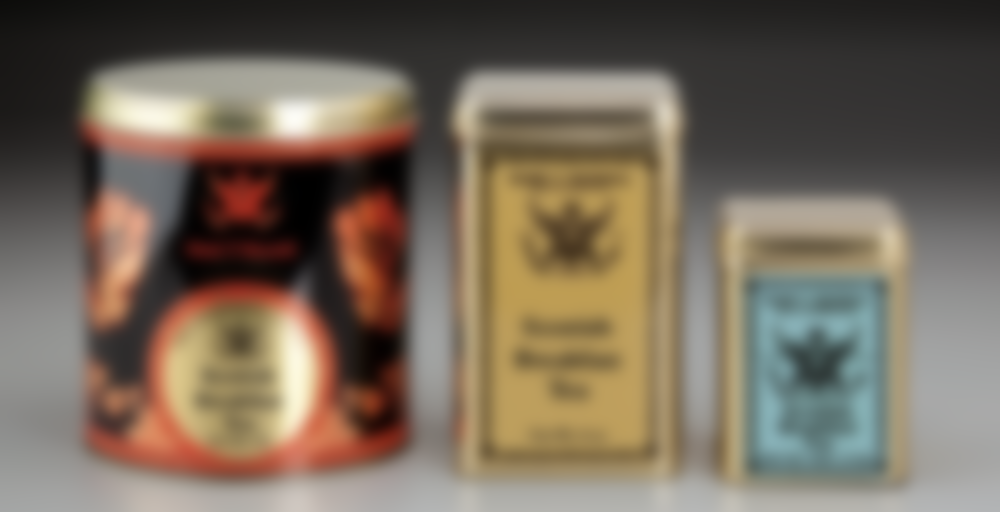 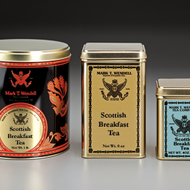 Our special blend of fine Indian, Ceylon and China teas brew to a bright, lively liquor. Full flavored and robust, it is the perfect cup to start your day.

It’s been ages since I’ve had a breakfast blend! I’m relatively familiar with the English Breakfast, less so with the Irish Breakfast, which out of the two I prefer because it’s a little stronger and a little heartier. Scottish Breakfast, however, is new to me, so I’ve been curious about it for some time. It’s the completionist in me. Getting the British Isles rounded of, sort of. (I wonder if there’s a Welsh Breakfast out there somewhere too…?)

Hesper June shared this one with me and her parcel arrived at the same time as a parcel from Auggy did. Lately I’ve taken to keeping unposted about teas on my desk, and I had just got it almost cleared from the TeaSpring order when this happened! Since Auggy in particular went completely ballistic and shared a whole tea shop with me, it seems like, the desk is now littered with tiny tins and I have my work cut out for me here. It makes it very difficult to work out where to start! O.O Exploring the selection a little, however, I found this and thought, ‘Gosh! How ideal!’

I still haven’t got any new Roy Kirkham (I’m working on it) pots, so I found the really rubbish tea-for-one pot in the back of the cupboard and resigned myself to the fact that this pot requires pouring over the sink, while trying not to despair too much about the waste.

Now, according to Hesper June this is a blend of Indian, Ceylon and China teas, which made me sigh, because really, how hard is it to be specific? I get that they don’t want to reveal too much of their secret recipe, but I just want to know which regions we’re dealing with. There are HUGE differences between regions in India alone. But then again, I expect the average consumer doesn’t really care about that level of detail, and likely it wouldn’t mean that much to most of them anyway.

Guess the ingredient it is, then.

Well, from the aroma alone I’m already suspecting the first one and the flavour strengthens that suspicion. I think there must be Darjeeling in here. It has that grassy, spicy aroma and the same sort of grassy flavour to it, along with a certain mineralness. I don’t think it’s very much, though. I can’t find it on every sip, but in the aroma, especially while I was pouring it, it seemed very clear.

Then there’s something quite sweet in the aroma as well. There is the Darjeeling note, in a sort of fleeting way, at the top followed immediately by something floral, and underneath all that is the sweet bit. It smells not like caramel but sort of along those lines. A bit malty and quite heavy too, as if the weight of it made it sink below those other notes. It doesn’t show up so much in the flavour as such, but it stands out in the aftertaste, again as a caramel-esque note. It rather enhances the impression that it’s heavier than the other notes and that I might reach it better when I get closer to the bottom of the cup. I have absolutely nothing to base this on, but get a strong impression that this note is from the Ceylon element.

Now finally, I mentioned a floral note, and here I think we have our China participant. Keemun, I think, which accounts to the malty element of what I imagine to be the Ceylon note and that floral note. You know how Keemuns, dependent on quality and leaf grade, can have either a pseudo-smoky top note or a floral one, or even sometimes both, yes? I tend to prefer the smoky one over the others. The floral element here, however, reminds me strongly of the way a floral Keemun tastes, so I think that’s what it must be.

So Keemun and Darjeeling to give it character, Ceylon to give it body, I think. I can’t really region-guess on the Ceylon, I’m far too inexperienced with that area to do that. I’m puzzled, though, as to why I can’t find any Assam in here. I thought Assam was pretty much a breakfast blend given. Of course me not being able to find it, doesn’t mean it isn’t there. Me being able to find something doesn’t even mean that it is there.

Now, I don’t much care for Darjeeling at all, so when I first smelled that in the aroma my initial reaction was to be a bit wary, but as it turns out there wasn’t really anything to be afraid of here. Yes, it has the Darjeeling notes that I don’t like, but they are not on their own. In a blend, they get spaced out a bit and complemented by the other ingredients. This way, I find it much more tolerable, so I’m beginning to think my dislike of pure Darjeeling is simply due to an overload of these particular notes. It seems to be going down just fine in a blend.

Love this breakdown! I’m always curious to read about what other people have found to be common to certain regions. I’d love to feel like I could pick them out; but I’m sure that I cannot, so I tend to avoid straight tea blends like the plague. I feel like I need far more experience with single types. The one Keemun I have tried indeed had floral notes!

It’s something that comes with experience, I think. I didn’t sit down and learn it, really. It all started with, ‘hey this reminds me of…’ and then I started wondering why it gave me those associations. (But yes, it does help to familiarise oneself with various regions first)

This tea had me slightly puzzled as well.
I just was expecting something of a more hearty nature.
But,was met with this tea,which I thought tasted more like a afternoon blend.
Very good review,you are much more experienced at tasting than I.

Perhaps it’s a breakfast blend for A type people? :p

Interesting breakdown! And it is surprising to have a breakfast blend with no Assam. I thought that was standard!

Also, yes, I might have been a wee bit enthusiastic. But I had been holding on to some teas specifically to send to you but I knew I was going to wait until after my LPdT and ATR orders… so you got bits of those, too. I was a bit surprised when I saw how many ended up in the pile, though. I had more new(ish) tea than I thought!

I know! It’s totally puzzling me. And it’s not like there’s anything else equally strong in there instead either. And yet somehow it still worked, although I would agree with Hesper June that it felt more like an afternoon blend.

I like this tea overall.
It’s nose is not untypical of the ‘breakfast blends’.
However what surprised me was how it tasted.
For some reason I was expecting something fairly strong maybe even hearty.
But, what I found was that it’s like a English Breakfast’s shy little brother.
It is very smooth and almost a bit of brightness?? (sorry I am new at this)
I like it, but I have been letting it brew a smidge longer as well as making my measuring spoon slightly heaping when I make it and have been happier with the results.

Boiling 5 min, 0 sec
Yours I Like This
4 likes
2 comments
Edit

Bright is in fact a term used to describe tea so good job! :)