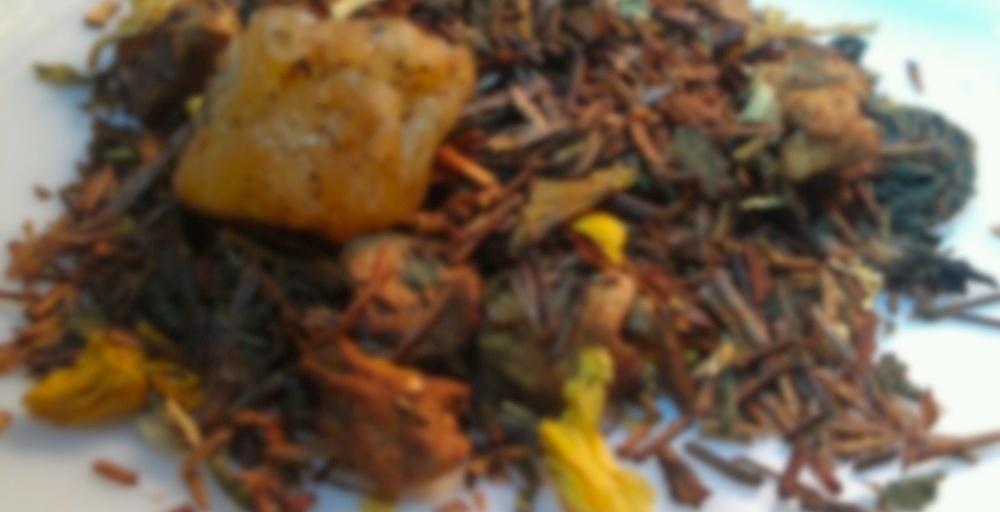 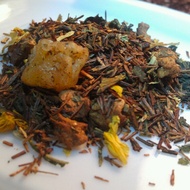 Mahamosa is so awesome and sent me 3 half ounce samples of other things to try! I had seen them posting this one but I didn’t even think to look for it when I ordered. Turned out just fine!

This actually doesn’t come across as pumpkin to me because of the honeydew. The honeydew is so sweet and comes across as melon that when it does transition to the more squash-y flavor of pumpkin it’s kind of a shock! It has a really nice sweetness to it, which I like, but it’s kind of lacking creaminess.

That’s what milk is for, right? Milk definitely subdues the honeydew, although it’s still very present, and it now tastes much more like pumpkin. It’s more creamy too. I wouldn’t choose this for a pumpkin tea, but it’s not bad.

Most importantly, it was a rooibos I could actually drink! And it got me over my fear of nettle leaf. Just look at those things, they’re like a seasonal allergy sufferer’s worst nightmare. I know it’s dried out and not going to attack me with histamines but I am still terrified of it.

It does sound most original, I never would have thought of blending honeydew and pumpkin. Mmm.

Had Safety Dance in my head for the past hour :/ No idea why. Been singing it with my husband and decided we need a distraction so popped the kettle on. This Pumpkin Cream wasn’t in my virtual cupboard for some reason.

This smells and tastes heavily Rooibos based but there is a definite creamy squash element to it. Not pumpkin exactly but close, just a touch too sweet for pumpkin. After a few sips the Rooibos tones itself down and the creamy vanilla becomes much stronger.

Not a bad blend, certainly an Autumn one but I would have liked the pumpkin to taste stronger and more defined. Still it was a tasty enough blend.

What is this? A seasonal tea that I don’t actually hate? Will wonders never cease?

Really, this doesn’t come across as pumpkin to me at all but it’s named seasonally so it counts! The ingredients confuse me and I was a little hesitant because of the rooibos and melon but I went looking for a holiday tea without ginger or cinnamon or cloves and such and Mahamosa certainly delivered.

I brewed up basically my whole sample in the Breville and only after I poured it into my cup did I realize I had no milk. So first cup, no milk, just sugar. Tastes super sweet (which I like). Sweeter than a tea ordinarily would with the amount of sugar that I added. I think it is the melon. And it is super surprising that I even like the melon because I ordinarily don’t like any kind of melon at all, although I will tolerate watermelon. It doesn’t sit on my most-hated melon list though, that belongs to cantaloupe.

I don’t even like rooibos all that much and I can hardly taste it at all in here, it’s so far in the background of flavours. As I let my tongue still after the aftertaste has lingered a while I get sort of a rooibos-y feel but that’s it.

Now I need to get my fat ass off the couch and evict the adorable kitties out of my lap (15 year age difference and they are cuddling like no tomorrow) and go to the store because I’ve been away for a week and a half and the cat sitter cleaned my fridge and there is now nothing in it at all beyond some apple sauce and chocolate soy milk and maple syrup. Seriously, that’s all that I have. And some weird weird soda from I don’t know when. But anyway, yes milk.

And I keep hearing about tea soda being made so I’m going to buy some soda water too just to try it out because I am damn curious.

Tea obsession back into full swing. I missed ye.

It’s been quite a long time since I’ve found a rooibos tea that’s really impressed me. Not only did this impress me but ever since I got my first taste of it, I’ve been craving it again and again.

I didn’t know what to expect after smelling it, the pumpkin aroma was very strong it took me a bit off guard. Continuing on, though, the more I could smell it while steeping, the more alluring it became.

I was pretty eager for that first sip, and well justified. It was absolutely thrilling — crisp, buttery, pumpkin-y goodness, that still managed to keep the natural taste of the rooibos. This tea is the absolute perfect thing to indulge in on a chilly night of relaxation. Oh man, I think I just found my favorite herbal tea.

Now catching up on the show Forever (kinda makes me think of Castle/ Sherlock Holmes/ Highlander. The male lead makes it even more watchable.) I wanted to try this because it reminds me so much of a blend at the ‘local’ shop. This smells like pumpkin and melons. While I’m used to the certain spice blend, this one tastes like a pumpkin shake. It’s nicely creamy. Overall, a good evening cup.

Now I want a pumpkin shake!

I’ve been drinking a lot of rooibos over the last few years, and I think it’s mostly because I still can’t decide whether I like it or not. The flavor of the rooibos does not come through very much, but then again it was a pretty weak tea overall. There was a fairly strong vanilla extract scent when I opened the bag, and it remains when the tea is brewed, but the flavors are all very subtle. It has potential however, so I am going to try this again with double the amount of tea and see how I feel after that.