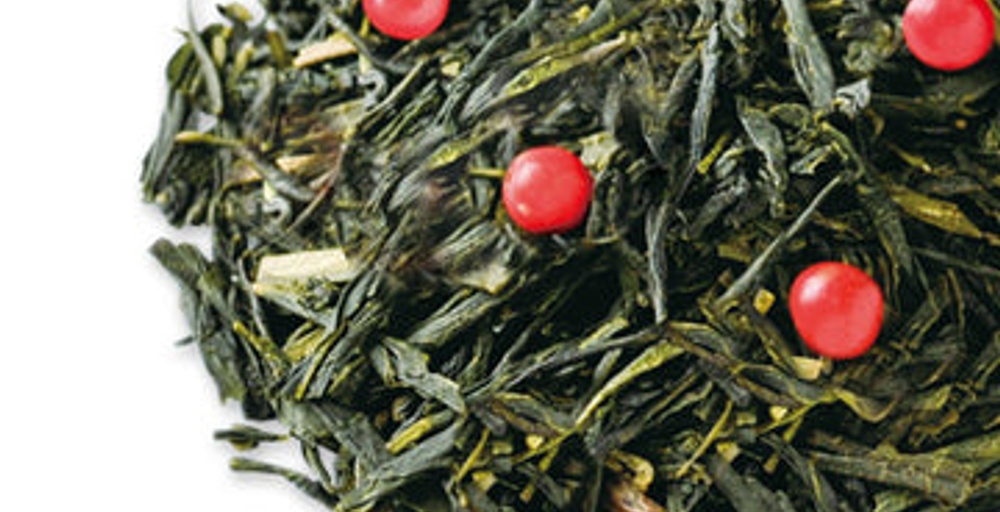 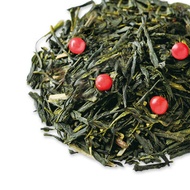 I am drinking this today after a long hiatus from it. I downgraded it a bit as it is not as good as I remember, it’s a bit tart and has a strange aftertaste. It’s interesting how my tastebuds have evolved over time. I need to finish it though!

I approached this tea with a mixture of hope and trepidation: my favourite fruit flavoured teas are all from Lupicia, but so is the Sakura Vert (a similar tea made with cherry leaves) that is close to the top of the list of the most undrinkable teas I’ve ever tried. The Sakura Vert was so awful that I only got through a few sips and then had to pour the rest down the sink.

But yay, this tea has a lot more in common with some of Lupicia’s other fruit teas. Clearly, they do much better with cherry fruit rather than cherry leaves!

The leaves brew up into a nice warm light yellow liquor. The cherry is particularly noticeable in the scent, so you breathe it in with each sip, but that’s not to say it’s absent from the flavour of the tea itself. As with some of Lupicia’s other fruit teas, the balance between the fruit flavour and the flavour of the tea is really, really well done. It’s neither too much nor too little, and you’re left with an aftertaste that isn’t astringent but more pleasantly sour – more than a little reminiscent of sour cherries, so that’s definitely a plus.

Of all Lupicia’s fruit teas that I’ve tried, this tea reminds me more of their Kotobuki than any other. This tea doesn’t have quite that “full” sort of texture in the mouth that the Kotobuki has, but there’s still quite a lot of similarity in the way in which the fruit flavour makes its presence felt in the overall taste.

Have you tried the black tea variation?

@Ricky No, I haven’t tried the black tea version. I am a bit of an odd tea-drinker in that black teas rarely appeal to me, so I almost never drink them.

i threw out my sakura vert. its awful.

I have to strongly disagree. Sakura Vert is much better than Sakurambo Vert (though they are completely different)! But then Luthien, I read a lot of your reviews, and I think our taste buds are opposites. Still, I’ll forgive you because you have an awesome username! :)

This isn’t my favorite cherry flavored green tea – it is a bit tart for me. I don’t hate it, I just would prefer a slightly sweeter cherry taste. I do like the light, crisp taste to it though.

Thanks for some of this tea, Amy oh!

I have no idea what temperature my water was but this isn’t bitter at all, in fact I can hardly taste the green tea unless I am purposely trying to taste all the flavors.

This is tart, but not very sweet. And it does taste like cherries. At the same time it’s a nice, light tea. I may give it a try cold steeping at some point.

When I opened this sample up, I wasn’t sure what this was going to taste like. It was fruity! In fact, when I brewed this up, this tasted like bubble gum! I only drank about 4 ounces of this tea when I started to feel jittery again. So strange. I only drank the Keemun this morning and this Sakuramba for lunch. I think I need to reduce my caffeine intake. Anyhow, this tea is okay. I wasn’t a huge fan of the flavor.

This is a really good green tea. I disagree with some of the other users though.

To me, it can be kind of bitter. I’ve tried steeping it for less time and using cooler than boiling water. I even added sweetener, but it’s still bitter. Granted, my taste buds usually like overly sweet things and can’t take bitterness at all.

Brewing it as an iced tea works but makes the bitterness even more pronounced. I prefer it hot. And this is a very heavily cherry flavored tea! There’s nothing subtle about it! Lupicia does make a lot of very subtly flavored teas, but this isn’t one of them.

If you want a more subtle cherry tea, try Sakura Vert. You have to like sencha to be able to appreciate its unique flavor, but it’s delicious! I tend to water down my Sakurambo Vert to cover the bitterness, but then I also lose the cherry-ness.

Boiling 2 min, 0 sec
Yours I Like This
4 likes
0 comments
Edit

Made a big gallonful of this iced for my club social. Everyone seemed to like it.

Excellent green tea!
The berry taste is not overwhelming and the tea it self needs no added sweetener.
A good spring drink :-)

Glad to see you’re enjoying the teas I sent =)

I received this as a free sample from the Lupicia newsletter. I don’t like fruit-flavored teas, green tea, or cherries, but I figure I’d give this a try since it was free.

I was really surprised! The green tea wasn’t bitter, no matter how long I brewed it, and the cherry was a sakuranbo cherry, which is less syrupy sweet and more tart.

Overall, the tea was a delight to drink and smelled clean and naturally sweet. Unlike many fruit teas, the smell and taste matched up nicely.

Smelled great as I was steeping it. Taste is kinda bland to me. I was expecting it to taste more like cherries. The cherry taste is really an aftertaste. As the tea cools the cherry taste is more prevelanet. Perhaps would be best cold?
Ok after cooling this just tastes like bitter leaves. Yuck!