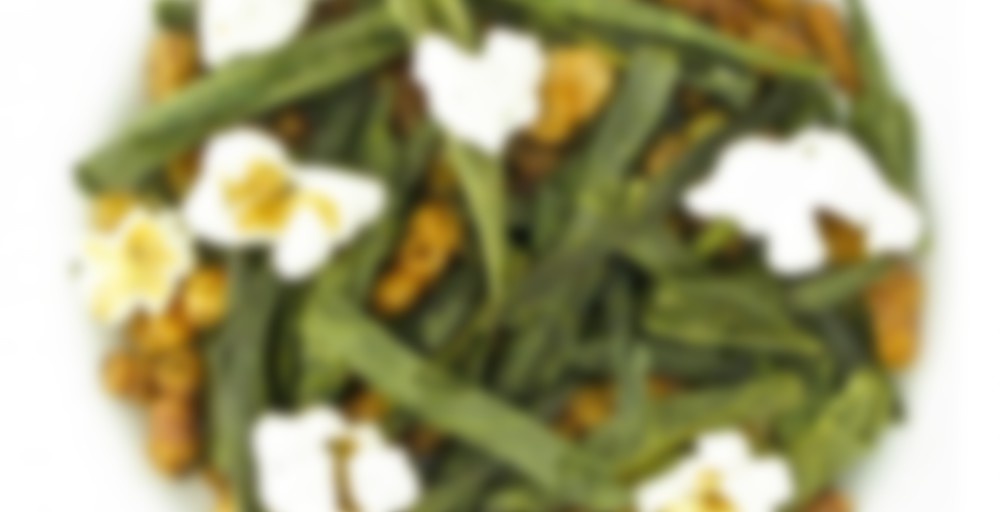 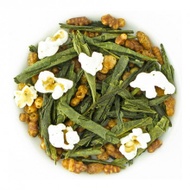 Genmaicha is a Bancha green tea to which grains of roasted and puffed brown rice are added. This Japanese green tea boasts both a fresh green tea taste and the light hazelnut flavor of puffed rice.

Rich in catechins, green tea is recognized as a good source of antioxidants. Refreshing and delicious if served iced in the summertime, delightful when hot in the winter.

Tea of the evening here, the last one to try in my Kusmi “afternoon” tea sampler set.

I normally quite like genmaicha, but as a few other people remarked this is a very light version and I’m used to the ones made by Japanese tea companies that are quite nutty and brothy. This is rather genteel with a sweetness and a slight floral note. Odd, I thought all genmaichas were mostly the same but perhaps the difference is the green tea they are using in this blend. I think I prefer the more traditional kind, but this is pretty nice overall and made for an interesting surprise. They claim this is delicious iced, so I may need to try that.

LOL! That’s how they get you! I feel the same way about Genmaicha. I love it but it has to be more vegetal/brothy and toasty/nutty for me to be really enjoyable. I just love the scent while pouring water over it.

This one was strangely floral to me too. It really seems to compete with the roasted elements.

I reached into my still large pile of samples from Shmiracles and randomly selected this tea. The dry leaf aroma is surprisingly floral. Last time I checked, there’s nothing floral about genmaicha. It’s simply a medley of bancha green tea leaves, popped corn, and roasted brown rice.

Luckily, once the water hit the leaves, a nice roasted rice aroma floated up into the air. Oh thank goodness! You had me a bit worried there, genmaicha. ;)

The flavor is roasted rice with a very light green tea background. There’s something floral in the taste as well. Strange. Floral notes do not belong in my beloved genmaicha. It’s fighting the roasted note, which now only emerges in the aftertaste.

It’s nice for what it is, but it’s not my perfect genmaicha tea. How interesting to find a floral genmaicha though. I’ve definitely never come across this before. Thanks to Shmiracles for the sample!

First time I met this tea, I burned my tongue ! It was in a big department store in Paris where Kusmi has a corner.
The salesmen always prepare a large volume of one tea and offer it to the potential clients around.
This is a very kind and marketed attention …but they should have warned that it was incredibly hot :)
Anyway I found this tea quite good as soon as my taste buds went out of a burning coma.

I have a small tin of it and had the chance to prepare it home.
This is a very pleasant but quite light Genmaicha.
Not my favourite one but rice and popcorn are really present and there is absolutely not bitterness.

Nice to begin with Genmaicha

From the Great Canadian TTB.

This one tastes like Bancha green tea, there is a taste of seaweed (like seaweed paper). There is just the slightest salty flavour. There is a strongly roasted flavour from the roasted brown rice, which I like. There are small pieces of popcorn int he blend, but I am not picking up much popcorn with this one. I think I prefer just a tiny bit more sweetness in my genmaicha. This one is definitely better as it cools I think.

This a backlog from last night just before bedtime. It was supposed to be another Tie Guan Yin steep but then there was gaiwan-fail and a lot of wiping up of leaves and such. Then I remembered I had this bag and decided to do that instead.

Then as I was sitting in bed reading and sipping, I realised that it was gift tea from a swap with EvaPeva so I really ought to make a proper post about it. It was really late so I wasn’t about to get up and turn the laptop on again though, but I’ll tell you what I remember.

Overall, I liked it a lot. It was sweet and very velvety smooth. It felt almost soft in the mouth. The nuttyness from the rice was quite nice too and not overpowering. It was just right.

I wouldn’t be able to say whether or not I liked it better than other genmaichas, but I will say that overall I liked it better than I have generally liked bagged Kusmi before. I haven’t had any of their loose leaf stuff (yet) but I have had a selection box with some of their bags. It’s like it makes a difference with their loose leaf, but my overall thought of that sampler box was that Kusmi as a brand was somewhat overrated. (I’ve also occassionally had a bag in the train home from my parents if I’ve been travelling first class, but that was brewed with water kept hot in a thermos, so I’m not really sure it counts)

I’m glad I had this one that was just genuinely good. It has renewed my hopes for Kusmi teas again.

Angrboda – you are our gaiwan-hope for the future – when you report ‘gaiwan-fail’ our hearts stutter & flutter!

a good genmaicha. and a reliable and cozy genmaicha is always a nice cup.

I always forget how much I love a good genmaicha. It’s a cool evening here and I wanted something hot and comforting, but still light. This definitely fit the bill!

I was fairly proud of myself having made a green tea without it going bitter. I tend to have that problem a lot, but I’ve gotten (slowly) better.

This particular genmaicha is really lovely! Sweet and amazingly smooth with that familiar popped rice toastiness. I’m also getting a really subtle floral note, which makes it even more tasty! Mm, I have to drink this more often.

I received this sample with my Kusmi Teas order. I thought the packaging was pretty with the mint green label and the cloth-like teabag. The scent wasn’t overpowering, but I managed to see a piece of popcorn and some rice mixed in with the dark green tea leaves. This is a VERY light genmaicha. It was unexpected. One of the first teas I got into was genmaicha because they would serve it at all the Japanese restaurants around me. This one was very watered down. The liquid was a light yellow. I really had to stick my nose in my cup and swish the tea in my mouth to really get the scent and flavor. This is nice and sweet and there is no astringency there. I like the light nutty and rice flavors. I imagine that this would be refreshing and nice iced or cold brewed.

I am not a fan, unfortunately. Light, barely detectable genmaichas are not my thing.

There’s popcorn in my tea leaves. Popcorn! (As I oh-so-eloquently wrote in an email to teaplz).

I love this stuff. Second day in a row I’ve made a large mug of it, and just stuck some in the fridge for cold consumption later. The smell and taste is overwhelmingly roasted nuts, which is delicious. The corn is more subtle, but gives it that little extra kick at the end. I fear my little sampler tin won’t be enough for me.

Could smell the roasty/ smokiness of our beloved Genmaicha from the moment I poured the water in the cup. . . .Picked up a few tea bags at one of the Fancy Food Shows, and it’s about time i steeped it! This is not their loose leaf version, but bagged….those of your familiar with Kusmi Tea should know that they really have awesome tea bags, basically sewn around the edges. .

First Steep. . .tasting the rice right away. This is the lightest version of Genmaicha i’ve tried. . . not too much of an after taste. Very smooth though. . . wanted something a bit stronger perhaps. .should have left the bag in longer. . .

this has nothing to do with this post. . . .but the Art of White Tea Sampler that they have over on the side for Todays Steepster Select is looking AWESOME to me.