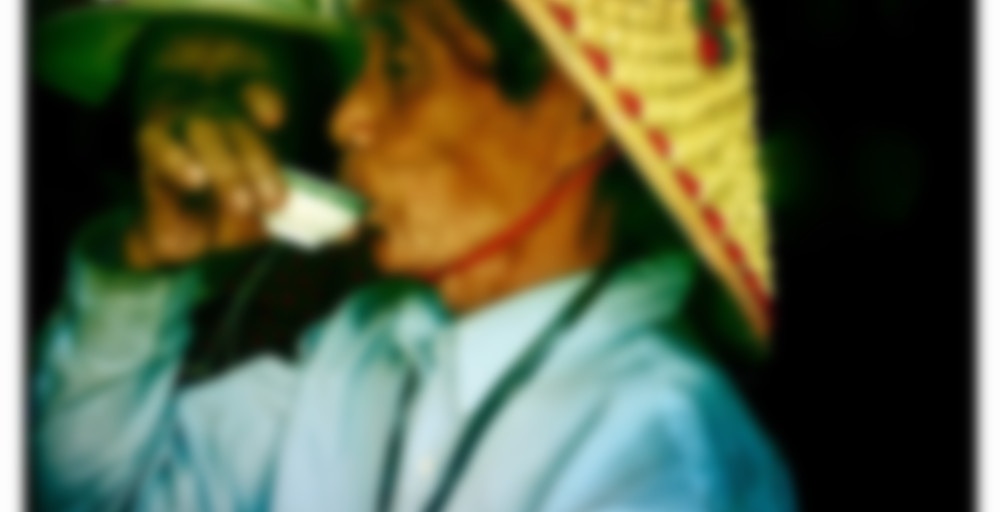 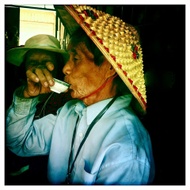 Club selection of April 2013 – One of two ‘black’ Puerhs that we’ll be offering in our subscription model, this is the fermented version of our popular unfermented, green, variety that we’ve already offered. Grown and harvested by the Pulang and Hani minorities in the Bada Mountain area, this tea has a nice smooth bite. We thought it would be the perfect choice as it has only a soft touch of the earthiness which marks fermented or aged Puerhs. It is an excellent morning tea that can be consumed on an empty stomach, and is also noted for its ‘digestive’ abilities after heavy meals. Discover Bada Mountain Fermented tea even further with Jeff: http://www.jalamteas.com/pages/bada-mountain-fermented-puerh

Wow. Ok. Got some things to say about this one!
First off, I think this is the tea I have in my cupboard that I bought ages ago at the tea festival? I hope.
It steeps up pretty dark, like a chocolate brown. Not quite coffee. Later infusions are lighter, of course.
There are plenty of woody notes but then somewhere around the fifth infusion, some intense aromas of garden soil emerged, while the taste was more of garden rocks. I had a very difficult time deciding whether I liked it! My brain told me I should hate it… but then I couldn’t figure out if that was psychological or not, and some strange throwback to my childhood made me think well maybe I should enjoy it after all… because I wasn’t permitted to lick rocks as a kid and it would be some kind of secret revenge LMAO. Not that I can recall ever wanting to lick rocks, but I’m certain it would have been prohibited!! Sighs. Yeah. I belong in the loonybin, I know.

Welp. It did go back to more of a woodsy note after two infusions. And then towards the end I noticed a sweet honeysuckle type note, and that airiness I love when I make it to late infusions of pretty much any oolong or black/puerh tea.
None of the notes (asides from the soil aroma) were particularly in your face, so I would say that its pretty smooth and mild. Not much of a caffeine buzz.
Also, I would say that there is almost no astringency, except it does have that drying sensation at some points, the kind I often see associated with clay notes. Here, that dryness was present during most steeps, petrichor and woodsy, although it did fade mostly in the last two infusions. Personally, I wouldn’t call that sensation astringent, as it didn’t have that typical sourness to it, and the drying sensation sat more at the back of the mouth, versus the front. Maybe my opinion on astringency will change, if I see it often after this? Oh. And that sensation did get a bit overwhelming at one point, and I had to take a break with another tea before coming back to this one.

Overall, I love the complexity but as you can see, its thrown me off a bit!! I guess it’s fitting that I hear rain tapping outside my window. There was snow earlier.
Feel free to judge. I’m a crazy bird what can I say :P

Not just you. A lot of pu’erh’s are cave-flavored to me.

what I found strange about it was the shifting back and forth between hay and cave-ness. Usually I find it is one or the other!

This tea is now unavailable. I was lucky to get a sample. I didn’t think I’d like a fermented pu-erh, but this is nice. Earthy and smooth. I know there’s another flavour in there too, but my palate is not sophisticated enough to figure out what it is. I’m curious to see how the taste changes after a few steeps.

I’ve been sipping on this puerh all morning and in light of the fact that i can’t get it anymore, i didn’t take super detailed notes. dexter sent this one my way and i’m always happy to try out more shou’s. this one had an earthy aroma initially but it lessens over the steepings and takes on a more subtle taste. The brew is smooth and extremely pleasant.

I had a REALLY nice shou sample from Jalam before…forget which one it was but it had lots of nice dried fruit notes. Prune and raisin.

I enjoyed sipping on this all afternoon, and will probably try a few more rounds in the morning. I wish I had more to say about it, but that was hours ago. It was smooth & tasty, & helped to rid me of the headache that I had all morning. Sadly, this is a sip down.