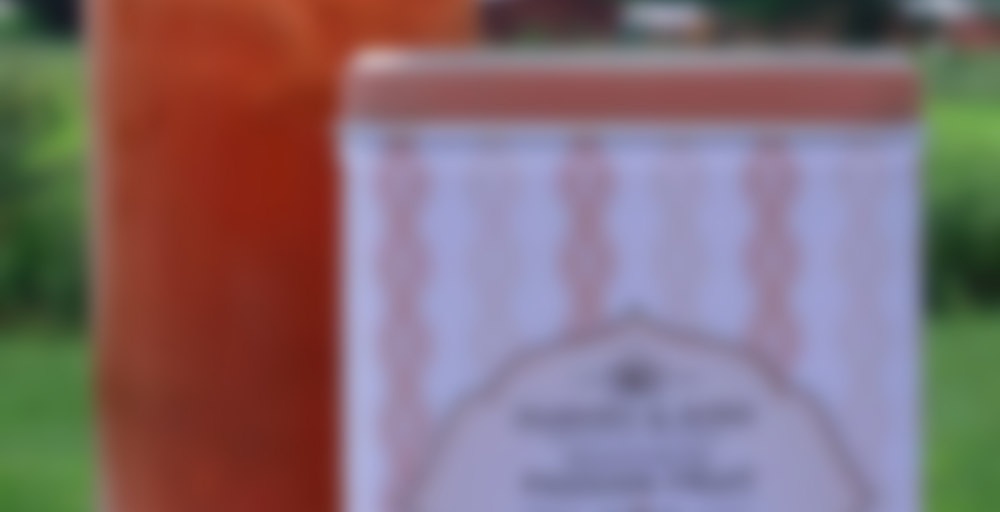 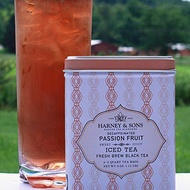 Iced tea of the day….

This is the last of the goodies sent to me by Russel at the Harney Shop in Millerton, NY. Thank you for the wonderful treat! I was excited to try this one, because on occasion I have a need for a decaffeinated iced tea. As I get older, I have become more sensitive to having caffeine too late in the day. It affects my ability to sleep well. Since this has been such a brutally hot Summer, iced tea is always a welcomed beverage for me into the evening.

For decaf, this is really good. I can usually detect a hint that a tea is decaf, but not so in this version. I get light notes of passion fruit that I am sure would come out a little more with the addition of something sweet. I take my iced tea unsweetened, though. The tea base is smooth, but not quite a smooth as the Peach Iced Tea I had earlier this week. I do prefer the Peach and need to do another run of Midsummer’s Peach (decaf) iced to see which of the two decaf versions I prefer. The pouches are pretty handy, so Decaf Passion Fruit might win just for convenience.

Thanks again, Russel, for my introduction to Harney iced tea pouches. There will be some iced tea pouches in a future order for myself, of that I can be sure! The next time I brew up the Peach, I am going to save the pouch in the refrigerator for a second brew the next day. Something tells me that they will do well on a second steep.

I bought a tin of this last year. And I just couldn’t get into liking it. I made it a few times this (neverending) Canadian winter and it just isn’t hitting the spot, or any spot, for me. So I tried it cold brewed vs iced.

It was really interesting, it cold brewed for 8 hours and there was still no colour change to the water with minimal flavour. After 24 hours, the water was quite pale. There was some taste. Definitely not very strong. It is not so much chemical passionfruit this way vs. iced, but don’t get me wrong, it is still not delicious. It is however, certainly drinkable this way. I think when I start doing some work in the yard (hint, hint – go away winter!), I will cold brew up a pitcher or two so I can drink it quickly as a thirst quencher. It is better cold brewed without sweetener added.

Also, as a note, I read that Terri planted her garden today. WTF, I still have snow in my yard. And it freezing rained last night so now it is more of that ice berg snow that you can’t even break up and spread around. sigh.

There is still so much snow here as well… :(

Yep – it snowed here today – still lots of it around. No gardening here for awhile (not that I have space for a garden, but would like a plant or two on my balcony…)

I think the rule of thumb for us toronto people is never plant before may 2-4.

That’s the same for SK. Last year I lost a lot of plants on the first weekend of June. I was gone and it frosted. And I still choose to live here…haha

Experience buying from The Tea Butler: Positive. I had several contacts with the owner, both via e-mail and over the phone, and he was very accommodating with an unusual request I had. Unfortunately, he is out of loose-leaf tea, and my understanding is that he does not plan to get any more to sell.

Dry Leaf: this is one of the best smelling teas I have ever had. The room that the open box (after all the of the tea was removed) sat in had a wonderful tropical fragrance in it for months! The leaf within the large paper teabag is chopped, but seems to be decent quality (much better than the fannings size leaf in a standard teabag).

Aroma: Unbelievable! When brewed this tea produces a tropical-coconut smell that fills the entire kitchen. I love it!

Flavor: It has a wonderful tropical flavor.

Value: I got this for a bargain price, but The Tea Butler doesn’t have any more of it, and H&S doesn’t list it on their website (although they list a caffeinated version). : (

Overall: This is probably my favorite iced tea. It is normally only sold to restaurants, but The Tea Butler was selling them to the public to liquidate his inventory. He no longer sells them, and I don’t know if you can get these anywhere else (I bought two big boxes of it—-yes, lots of it—-and would be happy to share some of it in a tea swap).

I make about a pitcher and a half on the first steeping, a pitcher on the second, and 2/3 a pitcher on the third. The first steeping clearly has the strongest flavor, but the second and third are also tasty! I drink the 1st steeping knowing it is fully caffeinated, and then treat the 2nd and 3rd steepings as basically decaffeinated (neither me nor my wife has had trouble sleeping after drinking the second of third steepings, so I imagine most of the caffeine is removed in the 1st four minute steeping). We also have the decaffeinated version (bought directly from H&S), and it basically tastes the same as this decaffeinated one. I have been drinking this daily since the summer, and plan to drink it daily all year round until it’s gone. I love this iced tea!