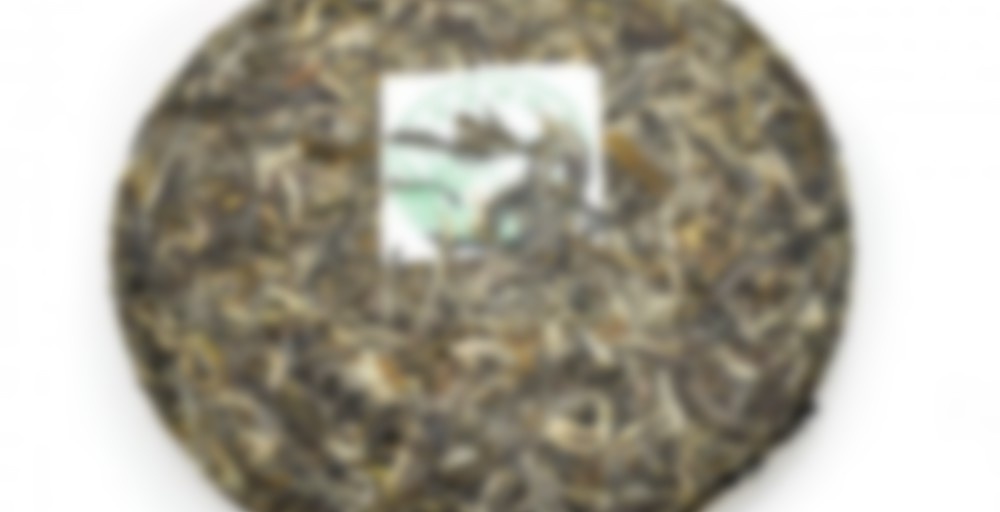 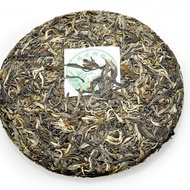 The raw tea cake is specially made of buds of Meng Ku native big-leaf tea tree. All tea buds covered with silver hair.

The floral aroma of this tea cake is really strong, refreshing and full of vitality.

After steeped, you will find the brewed leaves are back to life. Yellowish green in color, soft and shiny.

You could easily enjoy 8-10 cups, resistant to brew.

I sum this up with a story. A co-worker enters my office and asks, “What’s that smell?”
“Smell? What Smell?”
“It smells like old house in here.”
:)
The smoke really makes and sets this apart from the rest of the shengs I’ve tried.

That’s great! Rayn referred to a puerh I was drinking as “burning barnyard”.

Flavor: Gentle Mossy-Green-Woodsy and Mushrooms but it’s sweet and smooth!

I really REALLY like this! A very nice surprise, indeed!

Thank you Esgreen for the free sample!

Leaf Quality:
The leaves of this raw pu-erh smelled a bit mushroomy or fungal, and a bit earthy. Every leaf had downy white hairs on them. The leaves were green, white, yellow, brown, and others were black. The rinsed leaves smelled earthy, fungal, vegetal and smokey. Once brewed, they smelled more fungal and woody.

Brewed Tea:
The brewed tea smelled smokey, mossy, and had a light earthiness. The light yellow-green brew tasted floral, of mushrooms, and was mossy. I was very pleased with the first brew.
Second Steeping
This brew was much more floral than the first, and exhibited less mushroom notes. However, it was just as woody and mossy as the first. Each sip had a slight earthy finish.
Third Steeping
This brew was smokey, floral, and a little spicy. This cup tasted more like an aged pu-erh. Mild earthy notes crept into the last sip.
Fourth Steeping
I really liked this steeping. It was extra floral and sweet. A tiny bitter nut flavor followed. The fungal notes had gone.
Fifth Steeping
The steeps were still holding strong. It reminded me of the third steeping. Smokey, lightly floral, and a bit earthy.

Thanks again for the tea sample!

You’re the sheng lover. I’ve noticed that. You have to be slow and patient with shengs and really pay attention. Sometimes I’m too impatient.

There’s just a different taste about Sheng pu-erh’s that I like. The aged shengs taste different than many of the shou pu-erh’s. What I really liked about this was that it had surprisingly floral qualities. And that’s a very good observation of me as it’s true! However I do enjoy a nice ripe pu-erh.

The more experience you have with shengs or shu’s, the more detail you notice. I’m walking through the shu forest’s now and spending my time there. That’s how I think of it. A nice bit of shu puerh has come my way so I’m learning all I can.

I like the way “Shu Forest” sounds; it captures the mystery and new adventure of tasting pu-erh.

I tried this sample from Esgreen twice: once on my own with notes and once with a close friend who enjoys pu’ercha during our weekly weiqi session.

I have mixed opinions on this tea. The flavor is interesting, and although the profile is strange for sheng, it’s pleasant enough. The smoky Lapsang-esque aromatics are very apparent, and seem far too potent to suggest natural nuances from the leaves themselves. It may hint at “yan wei,” or smokiness resulting from wood stove drying as opposed to sun drying. This is usually caused when the leaves are dried during the summer months, when the rainy skies prevent the leaves to be dried outside by sunlight, and these summer shengs are generally considered to be lower quality. I won’t pretend to know whether or not that is true for this sheng, but the unbalance of the smoke seems to come from the exterior of the leaf rather than the interior (cf. the Esgreen 2008 sheng zhuan sample from this round, which is also smoky, but does not taste as “smoked”).

The sweetness brought on by the buds is apparent. Besides woody flavors that are more noticeable in the beginning of the session, fruity and sweet floral flavors abound. However, there is a serious lack of power in the leaves. The amount of small leaves and buds may account for both of these features. Considering an age of only about two years for these cakes, the serious lack of texture and absence of throaty kuwei is concerning. The liquor is mild and presents an almost indiscernible cha qi, sitting somewhat unpleasantly in the stomach. The aftertaste is sweet, and there is a very slight bitterness present. I would not say that this is one of the strong points, however.

With sweetness and smokiness being the most noteworthy aspects of this very young sheng, I would not consider storing this for aging. Besides flavor, which begins wearing off after five steeps, this sheng provides a pretty boring session and doesn’t have much else to it.