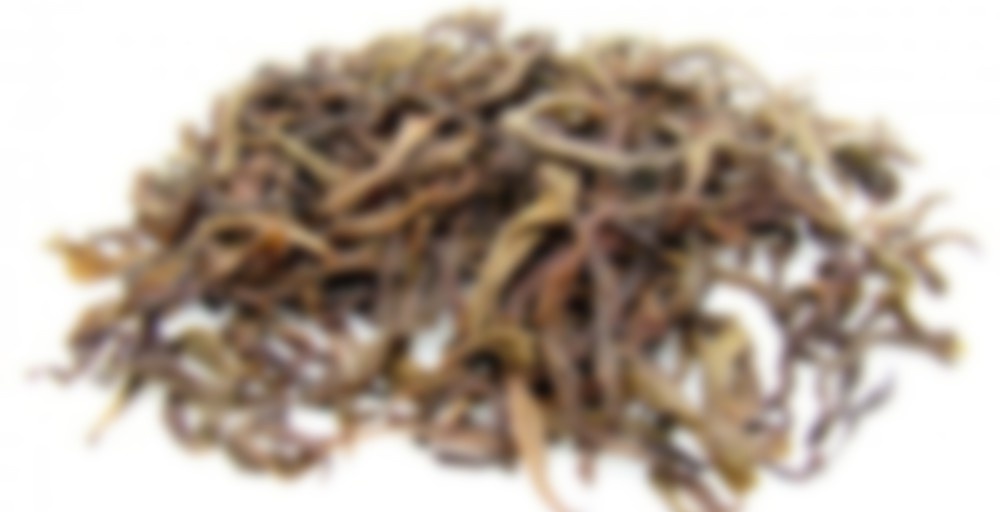 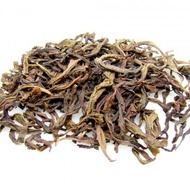 The dry leaves of this Wuyi Oolong are very different from other Wuyi Oolongs. They are yellow and olivine in color, rather than the heavily roasted leaves that are usually brown or black. From what I can tell, this tea is not heavily roasted like most other Wuyis. The leaves smell fruity like raisins. I’ve decided to brew this tea in my Yixing pot, which is seasoned for lighter Taiwanese oolongs with a fruity/floral/creamy slant. This should add to the flavor of the pot nicely from what I can gather, despite this is not in the same type of teas I usually brew in this yixing pot. The leaves of this oolong came in a tin and were wrapped in a very thin plastic lining inside the tin. They were packed in very well without much room to move, nor had they been crushed and there were practically no broken pieces of leaf whatsoever. These are very well handled leaves.

The smell of the leaves after sitting for a minute in the warm Yixing pot is heavenly. It mostly smells of toasted almonds and honey, or an almost horchata kind of smell, creamy and mildly spiced. After a 10 second infusion, the leaves smell fruity again, with notes of fig and plum and a strong mineral smell that is to be expected from a Wuyi rock oolong. The tea is a subdued yellow and looks slightly hazy, not cloudy. It isn’t as if there is particulate floating in the tea, it is more like the haze you see from tiny fluffy hairs floating in the liquor of really downy teas.

The tea smells like warm vanilla pudding. The flavor is incredibly complex, with a little more tanginess and mineral quality than i’d expect. It contrasts the aroma so that as you take sips and breathe in between, you get an alternation between the sweet vanilla cream scent and the mildly vegetal corn-like, nutty, creamy, yet slightly tangy tasting tea.

Legend has it that this tea gets its name (which means White Cockscomb) from a moment in time when a monk witnessed a rooster fight an eagle to defend its baby. The rooster, sadly, did not live. In memory of the rooster’s brave sacrifice, the monk buried the rooster’s body in respect and a tea tree sprouted and grew from that spot. This was the first Bai Ji Guan tree, from which all others today are derived.

If ever a tea legend seemed palpable to me, it’s this one. This tea is so complex and graceful, it feels like it could be an expression of a beautiful spirit, a legendary rooster’s swansong. The nature of it is unlike any other food or drink I have experienced. It is otherworldly.

It can be difficult as a tea reviewer to not get caught up in the hype and reputations of a tea, especially when it comes with a serious price tag (shipping costs considered, this tea was close to $1 a gram). It can be hard not to want a tea to be good so badly due to all this that you actually perceive it as something more pristine than it is.

But there are teas that come in huge bags for a few bucks that are incredible, and there are teas that come in small tins for a large sum that are incredible. I try not to consider these things at all when I sit down to have a tea. I clear my mind and focus on the tea alone, not how I got it or what I’ve heard of it. All that considered, this tea is an exceptional work of art on its own.

The second infusion is the same color as the first, with a lot more mineral quality emerging. The brew still smells a bit of vanilla but the flavor of it is more on the tart and tangy side, similar to pineapple or other fruits that are slightly astringent. There’s still a backdrop of cream and nuts, but it is in the background now below the mineral and tangier flavors.

The third infusion is similar to the second, but even more mineral-heavy, tasting more like a roasted oolong, though with the yellow color of the infusion I don’t think this is very heavily roasted tea. The leaves have brewed up a nice green color with red-brown tinged edges.

Over the next few infusions the mineral taste remained strong, but by the sixth or so it died off to a light and fruity taste with a syrupy consistency, like white wine, sharing some of the flavor profile of second flush Darjeeling teas, especially with the hints of grape.

While I think the first infusion is the real show-stealer with this tea, it’s still a nice journey and one I definitely recommend if you can afford it (or rack up some Green Points to spend on it on ESGreen, like I did, or go halfsies with a friend).

Hehe, do not rinse indeed, it would be like pouring money away (not that I ever rinse oolongs anyway :P )