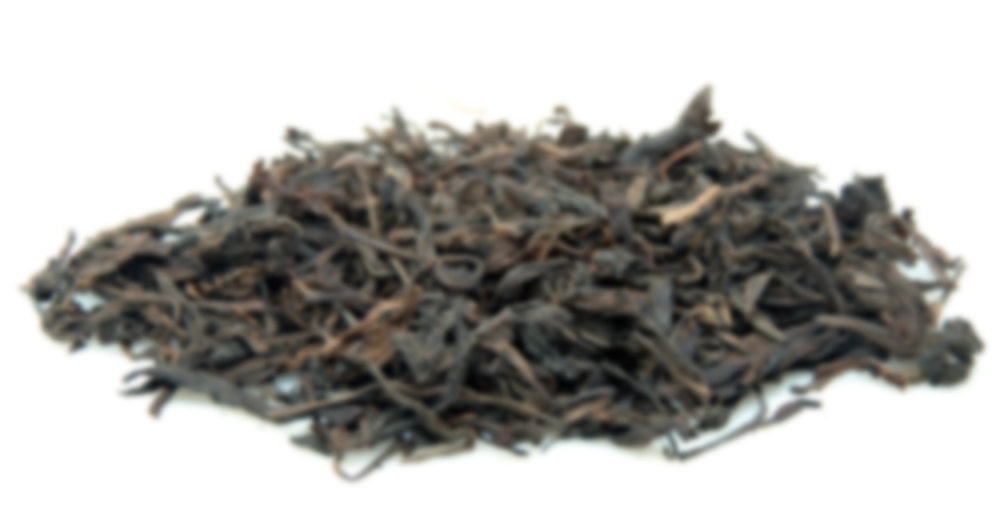 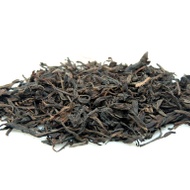 The raw material of this tea has been stored for over 15 years. Now it has been naturally fermented. The aroma is strong with the special raw tea note. But the tea soup is in amber color, mellow, smooth, a little bitter but has very sweet after-taste.

Wow, this is the oldest raw Pu Erh I’ve drank so far (second oldest was like 2001-2003 vintage), but on the other hand I find mellow ripe Pu Erhs more appealing. Dry leaf looks fascinating – long, twisted with rust-coppery texture and minimal leaf brake. You could tell by its appearance that it wasn’t handled much. With a short hot breath blowing onto leaves I definitely noticed dusty dryness with earthy and mewllow backtone and a floral hint (which was quite surprising).

I’m inexperienced with raw variants and not familiar with water temperature appropriate for brewing it but I read that lower temperature is used for younger raw Pu Erhs and close to boiling for older ones. Since I got a 6-7 gram sample of 1997 vintage I really couldn’t experiment much so I decided that I’ll use 3 grams with 100ml water on 95 Celsius. It would be nice if ESGREEN could provide brewing instrucions.

Fifteen years is a lot for loose-leaf Pu Erh when you think about it, there’s got to be a lot dust in it so I rinsed it three times. First infusion was somewhat light half-murky caramel tone with faint aroma and heavy (but nut overpowering) acidic taste and light tobbaco finish. Second infusion seemed to awaken the leaf (maybe I should go for four rinses instead?) and brought out a deeper caramel tone wile giving away of not-so-desired wet and stale notes.

However, I did enjoy it more than first infusion since acidic profile settled a bit and made a way for some new, but faint notes to appear. Liquor is silky on tongue and the same tobbaco finish with addition of tinglinkg sensation on tongue. Third infusion is more of what I anticipated – deeper tone with hint of acid (or should I call it sour?), nice boost on tobbacco followed by just a hint of bitterness and dry finish. After few sips I also noticed that some faint notes of… clay? It reminds me of eating a stew from unglazed clay pots.
On fourth steep is where the party started, clay notes blended with those of tobbacco and it reminded me of some better Pu Erhs I’ve tasted. Fifth infusion brought out the mellowness and previous notes that seemed to be of same magnitude. At this point I noticed that the tea is starting to get hard on my stomach/liver. Suprisingly, sixth infusion brought out some floral notes while vanquishing any remnants of dust, but with less prominent tobacco note.

This is where I called it a day and let the leaves rest on cool place untill the next day. I was later advised by ESGREEN that I shouldn’t have done it. So on day two I rinsed the leaves to awaken them and steep it for 25 seconds, and this being seventh infusion it showed some floral notes binding with hints of mineral and more prominent clay profile. Next infusion brought out more balanced appearance with somewhat nutty aftertaste (this stuff has pocketful of surprises, doesn’t it?). The following four infusion (for total of twelve) were less surprising but enjoyable. This is where I felt that I’m pretty much done
with it.

A leaf with magician’s surprise arsenal.

What did ESGREEN say you did wrong? Did they give an explanation?

" Hi Alen, you did right for the steeping. Long time stored raw pu-erhs has no steeping differences with ripe pu-erh. But we do not recommend soak the tea leaves in cold water or let’s say: please don’t keep the infused tea leaves. The infused tea leaves are more like cooked foods. There will be subtle changes inside. It may be not good for health. The the flavor and taste will completely change too."

I have heard others say they cold brewed the leaf overnight with success. I usually drain the leaf and spread it out so it can air dry and reuse the next day. Usually it works well, On rare occasion the leaf doesn’t take well to drying and reuse. I have never had mold issues from overnight storage which is where I thought they were going with their advice. What ever works for you and doesn’t give you botulism. lol.

It worked fine for me as well, but I keep my leaves in cool place overnight to inhibit bacteria/fungus growth that might be present.

I’ve kept the same leaves in my infuser for two days and used them. Not that you should, but I’ve yet to see them go bad overnight. One time the beau did leave some green tea in an infuser for several weeks though – that was yucky!

I wouldn’t do this if the leaf looked even a little funky, but it has always looked fine. Not advising anyone else to do it.

There is a famous TV show in China recommended a diet recipe with over night pu-erh. But I really could not agree with that. No medical proof for health affection. But the flavor could change obviously. In China we called it “Shu Wei” which means “over cooked flavor”. It’s something like fresh vegetables compared with cooked vegetables.

Just made another pot of this last night with some friends and I wanted to revise my previous comments. I am a self-taught pu-erh drinker which means that up until recently there was an enormous gap in my knowledge of how the ceremony actually works and what to expect from each steep. I am fine tuning my expectations as I go and learning how to enjoy pu-erh unique to other teas.

First off, if you are steeping a pu-erh and it doesn’t taste like much, don’t brew it for longer in the same water as I mistakenly did the first time round. The pu-erh flavor actually does develop as you continue to “wash” it in multiple short steeps. Pour out all of the tea liquid in the pot and put fresh hot water in, then repeat. (Thank you kOmpir for your detailed time appraisal!)

What happens as you prolong the ceremony is kind of magic. With each steep, the color is slightly different as is the taste. This method will definitely help you to appreciate the appearance of your teas more and I would highly suggest using clear glassware so that you can see the tea from every angle. The flavor, while still subtle, changes from clear to honey to smoky to spicy to stone.

My new rating now reflects an appreciation of the ceremony involved with making this tea as well as a minor change in understanding the taste. When it comes to pu-erh, my palette is still fledgling, but it will be developing quickly as I will be reviewing many new pu-erhs in the coming weeks.

this green pu-erh is exquisite. the only one that i can think of off hand that i enjoyed more is the same from a 1995 vintage. it’s earthy and robust as you would expect from a pu-erh yet not overwhelming. it’s dynamic in flavor as the bold notes of nut and earth make way for subtle hints of fruit and chocolate and finish off with the green vegetal side of this complex brew. i love this tea!