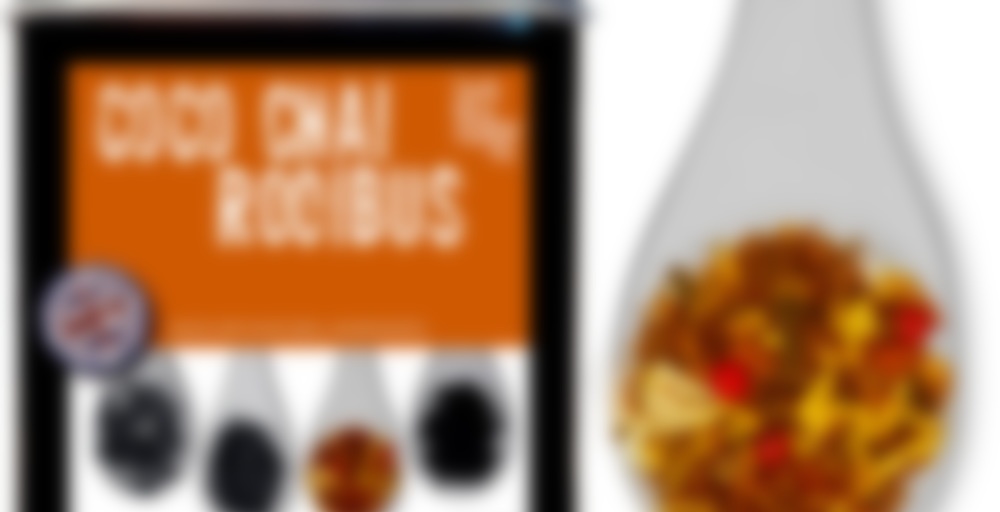 Thank you MissB for sending me this sample.
I’m not sure what I think. Weird, I think this is fruity spicy. Ingredients don’t suggest that, but that’s what I’m getting. No “coco”, some rooibos, a bit of spice, and some fruit. That’s what I think.
This really doesn’t taste that bad, I’ve drank what MissB sent to me – don’t think I would buy more – but not bad other than it doesn’t agree with the name.
Thanks MissB.

I found that with the teas of theirs I tried to, a cherry white with no cherry and a butter rum which tasted of strawberry with hints of raw home brewed rum.

LOL I need to stop complaining about tea names, but when you expect chocolate chai rooibos, and get fruit spice – it’s disappointing regardless if it’s good or not. If their other blends are like that too, then I think I’ll just pass.
Love swapping so you learn this stuff – and helpful comments. :))

I think by “coco” they mean coconut, not cocoa??? I thought that originally with David’s version as well.

Okay. It’s cooled down now to room temperature, and there’s a bit more bite to it in this second mug. I added sweetener in the hopes of remedying this sip, and… well I guess it’s okay. I taste orange for some reason now, and still the dry bite at the back of my throat. I’m okay with that dry bite, just as long as there’s a flavor in there, and it’s only a whiff of cardamom. It easily could be in my dream-like sicko phlegmy state.

I’ve upped my rating a bit, because it is a bit better than before. Next time I try this, it’ll have to be with a longer steep.

I found this at 3.99$ CAD at my local Winners. I had to try it. But once I opened the sealed bag, I was not in love with the smell. I tried it plain and hot and it was okay. But not something that I will buy again. The name is very misleading. To me, it doesn’t taste like a Chaï. It taste more like a fruity and lightly spiced Rooibos. But I was not ready to give up so fast on this tea. So, the second time, I used 3 times the amount of tea, put 2 cinnamon sticks inside the mug (16 ounces) and added some hot unsweetened almond milk. It was definitely better that way. Still not my favorite. But I enjoyed it as a Cinnamon Latte.

Drinkable, but not as good as the DT version.

Been seeing these around Winners and finally decided, two bucks an ounce? What the hell.

When I opened the bag, I saw… Giant white chips. Not flakes, but centimetre-squared chips. What the hell is this? Turns out it’s giant-ass chunks of coconut (not pictured, btw). But once I got over that (I stuck a spoon in there and mixed it all in—large chunks, low density, it’s inevitable that they all just rose to the top; happens with davidstea blends), brewed it up… Woodsyness from the rooibos, with a touch of spice. Not strong, but definitely makes me think ‘watery chai’. Could probably try stovetop (really, I find most chais are pretty watery just brewed…). Not really getting any ‘fruityness’ that others are describing—well, nothing beyond the kind you get from rooibos. Don’t taste the coconut. Which by the way ‘coco chai’? Tricky and misleading. I should have realized there was a reason they dropped that ‘A’.

But still, not bad. Something to drink at night. I should try stovetop, though. And almond milk. A nice goodnight cup.

Question, Teaze: What’s the point of selling this looseleaf in a resealable pouch if, within the resealable pouch is another, non-resealable pouch you have to cut open. I don’t… extra extra freshness…? Maybe? Buy one of those machines that seals these pouches for you and apply it directly above the ziplock. Win!

Getting a bit more taste as I reach the bottom. Think that’s where all the flavour settled. More rooibos, maybe more… cardamom? Just a touch. Still pretty damn watery.