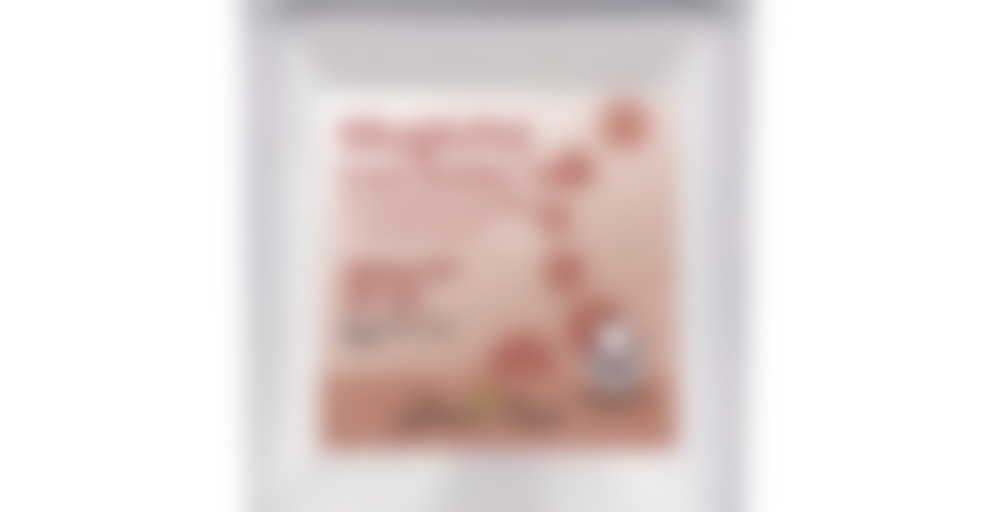 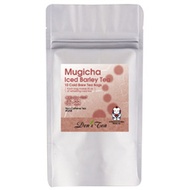 Mugicha is a very popular iced tea in Japan. Its taste is robust and somewhat similar to Houjicha. Unlike Houjicha, Mugicha contains no caffeine because it is made from Mugi (barley). Our Mugicha is very aromatic. The barley is steamed and roasted in a process called the triple roasting system. It is then crushed for cold brewing and packed in convenient teabags. Since the old days, the Japanese believe Mugicha cleanses the blood of impurities. Studies are being conducted to see if there is an additional health benefit here, but we do know that, like green tea, barley grass is high in antioxidants. Enjoy this body-friendly beverage this summer.

Brewing: Place one tea bag in 1 liter (35oz) of water and let infuse for an hour. Occasionally shake or stir to bring out the flavor.

This stuff is the BOMB but my husband does not like it – oh well more for me! LOL
Its just like a barley genmaicha!
SO GOOD!

I could not get into this. I should send you mine… ;-)

Oh! I would so like to try this if you have enough to pass along, Azzrian!

Sure thang lovely lady! Send me an updated list when you get time if you have others you want me to send!

Amy if you want you could pass yours onto Krystaleyn and if she does not like it she can send to me. We tend to swap a lot anyway. Thanks for the offer!!! :)

Haha, I haven’t been keeping track! I’ll have to write it all down :)

Amy it looks like you have a couple takers :)
Sandy it really IS yummy – earthy and so much like a roasted Genmaicha!

Krystaleyn LOL I know what ya mean – I am sure that we will talk before I send another box :)

Krystalen – I definetely have a few I can send you – PM me your address. :)

If you haven’t, try this cold brewed. Stick the tea bag in a pitcher for at least a few hours or overnight. Cold brewed barley tea, in my opinion, is even better than hot. Perhaps even your husband would like it better?

I saw a bunch of this at one of the Asian markets we were at last week, and was a little intrigued, a little mortified. Now that I know you think it tastes good…

Hot, it is very similar to coffee in flavor… cold it is almost like the sweetness of ale, without any of the aspects of beer (I guess the alcohol). In Korea, they pretty much drink it like water. Try it!

Oh it was cold Shinobi I got them specifically for that. I think it is just too rich for hubby he likes the lighter teas.
Dylan lol that cracked me up I was not sure if that was a positive or negative lol

I would be running out to buy more of this, but my husband is going to make me some crushed roasted barley next time he’s prepping grains to make beer, which will be a lot cheaper.

I am addicted to this stuff though! Highly recommended :)

And thus I reach the reason for my swap with Amy oh – my desire to try mugicha! Thanks for passing the huge, heavily filled teabags along!

So I followed the instructions (kind of) for this one, and brewed one teabag in 1L of water (in a Pyrex measuring cup!) I used cold Brita-filtered water, but instead of “cold-steeping”, I steeped it at room temperature, for probably an hour and a half to two hours. The teabag exploded a bit, which was annoying, but just means I have to filter the tea before I drink it.

Anyways! So the smell is earthy and a little bit fishy, almost. Kind of reminds me of pu’erh, which seems odd. The taste though… is very interestingly much like cold coffee! Not wonderful coffee, but there’s no astringency or bitterness, it’s just the roasted coffee flavour. This isn’t what I was expecting – I was expecting more like a genmaicha, as Azzrian had talked about, but this is intriguing. Will this make a good coffee substitute, flavour-wise? Iced coffee substitute??! This is exciting!! I’ll have to try it. I’m not sure this is something I’d drink plain too often (although I finished my cup last night; there are 3 more in the fridge), but it was definitely worth the experience, and I am hoping to experiment with milk and sweetener this evening and see how that goes!

I was not a huge fan myself. I wonder if adding some lemon would help? if you toss the others I won’t be offended. :)

To my mind, lemon would be strange to add! I don’t think I’ll be throwing the other bags out; I will either make fabulous caffeine-free iced “coffee” or pass them along, because this is really interesting!

I got some of this with my recent order at Den’s and I am not sure what to make of it quite yet. It is an iced beverage and low in caffeine, still I think I am most familiar with roasted barley being in an herbal coffee substitute so it tastes a little odd to have it as a cold drink. I can’t help but think I would just prefer this heated up and with some cream. This is my first mugicha so I don’t really know what I am talking about…. ;-)

Mmmm…. I love this tea! (Even though, technically, it’s not a tea.) I tried it for the first time at a Korean restaurant this past weekend.

It’s in these very large teabags for making 1 liter (35 oz.) of tea. I made two and put two bags in. I don’t like to drink cold tea, so I just left if out on the counter for an hour, then pulled the teabags out. It’s wonderful! It’s very nutty tasting, toasty and rich. My husband tried it and said that it tastes a bit like burned popcorn. (I disagree with the burned part, but maybe toasted popcorn… without the butter.) It’s wonderful! (Did I already say that?) My children both tried it. They said it tastes like coffee. (I agree a bit there, too, although it’s not a strong coffee taste.) They love it. It is completely caffeine-free, and as I don’t want bouncy children all night long, I love it, too.

It’s also a source of calcium! :)
My best friend who is Japanese introduced this to me as a child… but she had the premium organic farm fresh leaves sent directly from Japan. Oh it was heaven! except I could only find it at her house. Nowadays she doesn’t have it anymore but I can find the same bags that you have. Go figure! ha.

This comes in bags that make a liter at a time. It’s a fast, cold brew tea and is ready after an hour in the fridge. The resulting tea is a nice, orangey brown color. The taste is very nutty and grainy. It is very refreshing, and makes you want to gulp it down if you drink it while you are really thirsty. I enjoyed my first taste, and I think it will be really wonderful in the summer when it is hot out and we need something really, really cold to drink.

This is definitely something that I’ll be drinking again, especially since it is completely caffeine free. (Well, unless barley somehow has caffeine in it.)

Easy to make, and a little goes a long way. I throw a bag in a litre of water so the next day I have something easy to drink. It’s my new summer staple.

As many have recently reviewed (this being the free sample of last month), I tried Den’s version today for the first time.
Strangely enough, I have a decent amount of experience drinking barley tea. In Seoul, I had it for the first time in a restaurant and it was so good I bought it again when I came back to the States.
Korean friends of ours gave us roasted, loose, barley, and I can put a bunch of that in a pot and boil it and drink it hot or cold. I’ve reviewed barley tea before on Steepster, and I was reviewing this stuff (loose roasted barley, not the crushed stuff in a bag that you can more easily find in the store).

This was surprisingly very good, better than the other bagged barley tea that I’ve had before. (Though, not quite as good as the loose, but that’s not surprising).
The sweetness was especially a lot stronger than I expected.

In Germany, they have this stuff called ‘Caro Kaffee’ which my wife keeps telling me about. It’s a non-caffeinated coffee substitute that consists of roasted barley, chicory, malt, and rye. It sounds delicious. You can find it online, but if you want to get something cheaper, get Mugicha! I’m sure it’s good hot, and I imagine it would be good with sweets, just like coffee (yet, you can drink it at night).

Such a good drink for the summer! Really inexpensive & easy to make, too!

If you like Houjicha, this shares that nutty taste (Den’s Houjicha is great iced, too).

I hadn’t had mugicha for almost six years until this summer. When I studied abroad in Kyoto, my host mother brewed a large pot every evening (large tea bags from the grocery store) and then let it refrigerate over night in recycled bottles. My host siblings and I each took a bottle to school each day. Sometimes, instead of ryokucha, my host mother would brew a hot cup of mugicha after dinner. I only remember that it tasted like…barley – simply barley.

In comparison, Den’s mugicha is more roasted and even tastes coffee-like. At first these qualities deterred me from liking it, so I diluted the infusion by more than 50%. The roast used to be a tad heavy and bitter for me. Slowly, I started using the directions more strictly. The cool roasted grain taste was very refreshing during the hotter days and evenings. I just finished the last bag (now being late September). Heating up it up after cold-brewing produces a comforting cup akin to houjicha.

Glad I decided to buy this even though I didn’t have a sample beforehand. Another plus is that it’s affordable.