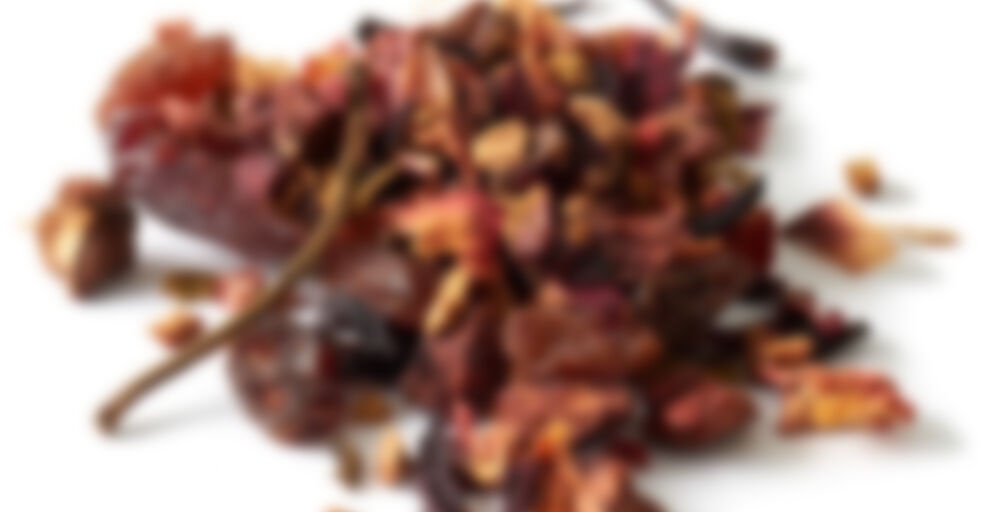 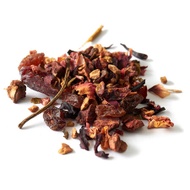 Kissing under of mistletoe is a holiday tradition that dates back thousands of years. During the Roman period, enemies at war would settle their differences under mistletoe. Today, we’ve put that same sentiment of peace & love into Merry Mistletoe. Feel merry & bright with a tart & juicy white tea strewn with soothing mistletoe, wholesome red cranberries & a kiss of cinnamon warmth.

Made with real mistletoe.

If you like Pomegrateful, this is another wellness holiday blend you need to add to your tea wish list.

Tart cranberry with notes of baked apple and hints of warming clove & cinnamon.

Not sure what I expected from a tea named “Merry Mistletoe”, but perhaps something a little evergreeny? Not at all what this is, which is a “white” (haha, I see basically no tea) blend packed with fruit pieces and some really delicious Christmas spicing. It’s actually quite tasty – a mix of primarily apple, cranberry, cinnamon with hints of other spices. Apparently there is stevia, but since cinnamon can also impart a sweetness, it must have blended in and wasn’t offputting.

I liked this more than I wanted to, considering labeling it as a white jacks up the price, but I think I saw it half price and now I’m torn. Oh well.

I’m disappointed it doesn’t have any mistletoe in it with a name like that!

Based on the name, I’d love this, but the ingredient list doesn’t sound nearly as exciting/special.

I have a small bag or two of this but haven’t tried it yet.

It does?! I thought I had read the ingredients and didn’t see it! Now I’m intrigued!

I wouldn’t say that you could taste the mistletoe at all! It’s definitely just a fruity, spiced holiday blend. I don’t know that it’s really anything special though, there’s always some version of this out around the holidays.

As people likely saw ages ago in DT’s regular advent calendar – this is a new white tea blend! I know it was the advent tea for day nine this year, but I’m not actually sure what day it launched on the website. It’s been a chaotic last few months, and I may have just missed writing a tasting note for it when it came out? I’m… not sure…

To be honest, I’m not a big fan of this tea but I do think that it has a flavour profile that speaks to a lot of people. If I had to quickly elevator pitch/summary the blend I feel like you can kind of capture all of its essence by describing it as the “lovechild of Pomegrateful and Sleigh Ride”. It really does feel like those teas mashed together to me. Sweet and tart red fruit, in this case largely cranberry, with punchy hibiscus and warming cinnamon along with a hint of crisp cider-like apple.

As y’all know I feel ambivalent towards Pomegrateful and Sleigh Ride is one of those blends I personally feel is a bit overhyped and that I get sick of when I have it too frequently. Makes sense that this one isn’t for me. If you’re looking for something that’s a fruity break from holiday sweetness or that makes a solid iceable tea during the winter, then Merry Mistletoe has your back.

I also think it’s cool that there’s actually Mistletoe in the blend. I’ve been drinking the Korean Mistletoe from Soocha a lot recently and I love that profile so much; it’s like a toasty pumpkin with hints of grilled nuts and cinnamon. You don’t taste it too much here but some of those cinnamon-ish flavour elements to add to the undertone of warmth in the blend.

Aside from being in the advent, there’s a very limited amount of this blend this year so if you had it in the advent and liked it, I don’t believe that this blend will likely be on the website for a prolonged period…

This sounds yummy but I’m not seeing it on the DT website :( (I enjoy sleigh ride+pomegrateful but did not get the advent)