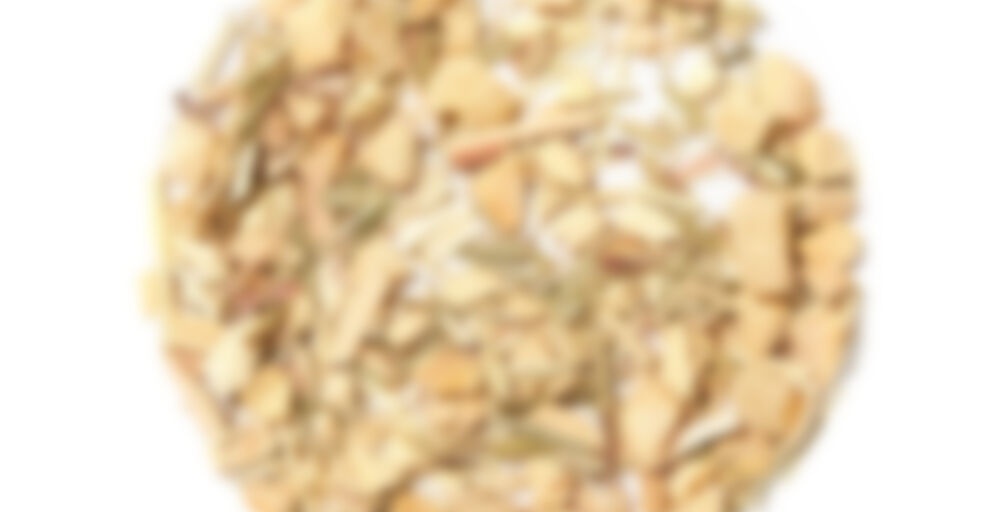 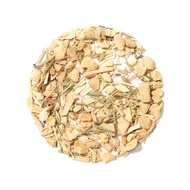 Nobody looks forward to cold & flu season, but it helps to be prepared. Our mellow ginger tea is made with cold-fighting ginger plus a hint of lemongrass for a citrus kick. And guess what? In aromatherapy, lemongrass is also used to bring on waves of relaxation. This soothing herbal tea can even help an upset tummy – as sweet as honey.

What makes it great
• A sweet way to help soothe the common cold & tummy troubles.
• Traditional medicine has relied on ginger for centuries for its warming properties.

42
Not Recommended
Cameron B.
3312 tasting notes

Last one from the Gift of Sleep sampler that I just bought for the Nordic mug.

Wow, this is very sweet. Must be the honey crystals and the sugar from the crystallized ginger. It is quite gingery, but not so spicy that it burns my tongue or throat.

The ginger part is expected, but the sweet overload makes this undrinkable for me unfortunately. And it doesn’t even really taste like honey? In fact, there’s an artificial sweetener sort of aftertaste. I wonder if it’s from the “sweet ginger flavoring”?

Why does DT’s do that? Seriously.

It is only ginger, honey and sugar?

It has lemongrass as well, but otherwise yes ha ha.

Oh dear. Not for me I guess. I won’t mind ginger and lemongrass though :D

I wonder what range of ingredients they can use and still call it honey.

Honey, ginger and lemongrass sounds like a super medicinal combo

Sounds like it would be good if not for that (artificial?) sweetener.

I forgot how mild the ginger is in this blend, and mixed it with Cold 911. I was hoping to add a spicy kick to Cold 911, but this didn’t add much. I’ll definitely be skipping this one in the future.

Last night was a bit of a disaster. I stopped studying around 11:30 at night. Watched a show for an hour to destress and then made my way to bed. My stomach was feeling a bit uncomfortable but I figured I would fall asleep and it would be fine. When I couldn’t get comfortable, I took some tums and that seemed to help a little since I wasn’t nauseous anymore. I laid back down but continued to toss and turn. At some point I gave up and watched a show for a bit then tried again. Finally I grabbed my phone to see if I could look up a comfortable position to sleep in since the discomfort turned to pain and the nausea came back full force. I was expecting it to be 3 am…it was 5 am. Then the nausea got bad and I started throwing up.

In my head all I could think was “nausea, heartburn, indigestion, upset stomach”…why don’t I own pepto?! What I do own is Gravol. Unfortunately Gravol also makes me groggy for days and seeing as exams are nigh, I don’t have that kind of time.

The vomiting stopped but then the stomach pain got really bad at some point so I ended up just wandering my apartment at 5:30 am, googling. For a second I thought it might have been appendicitis but I talked myself off that ledge b/c (1) I didn’t have a fever (though I did get the chills) and (2) the pain was not as bad as my gallstones were and I assumed it would be on par so I paced and googled. Finally I landed on home remedies and recalled ginger is meant to help and that I grabbed a bit of this from DAVIDs not too long ago.

I brewed a mug and it was agony waiting for the pot to boil and the tea to steep. When it was finally done, I tried drinking it but it was hot so I had little sips and honestly, it helped a lot. It soothed the stomach pain and nausea enough that I was able to fall asleep just after 7 am.

Of course my alarm went off at 9 am for class so sleep didn’t really happen but I have microwaved what was left in the mug and am once again sipping on this ginger tea. It doesn’t taste so good that I would seek it out just for a cup and honestly when it was boiling hot last night (I guess technically it was this morning) all I got was ginger and heat (as in from the boiling water) and so I didn’t really care. Now it is cooler and I am getting some more flavors and there is a weird sweetness that sometimes accompanies ginger that I don’t love here in the cup. Also, I think it would have been better off without the lemon…though I guess that would just be DAVIDs other Ginger blend (Super Ginger?).

Anyways, while it doesn’t taste the best, it is palatable AND it did actually help with my stomach issues so this is a definite recommend from me! Also, similar to Cold 911, its a good tea just to have around for when you aren’t feeling your best.

Y’know, aside from the being very tired part…

I am having horrible heartburn and reflux the past ten days or so, and remembered my Gin Gins hard candy. It is helping, but I really need some ginger tea!

Glad you are better today!

It’s maybe a little bit ironic that I’m sipping down a tea that just “launched” but it’s actually more that this tea returned as a seasonal tea – the blend we carried last year, named Ginger Crystals, is back as part of today’s sort of “mixed function” wellness launch but with a spiffy new name – “Ginger Honey”. There is literally nothing else about the tea that’s different other than the name – we just thought that positioning it slightly differently could help the tea reach a wider audience, similar to how changing the name if Spiced Apple to Baked Apple Chai led to a wider range of people trying it.

Names have power, for sure.

I’ve talked about this one before – it’s basically a lemon ginger blend, and while not my personal favourite tea I think it satisfies the need it’s trying to fill really well. This cup, and another that I had yesterday, were both sachets and I think that’s the perfect format for this kind of tea – if you’re feeling nauseous or want a good “sick tea” to fill that lemon/ginger multi purpose void I just know that I personally almost always want that tea in sachet format. It’s just MUCH more convenient; I don’t like to fuss around with loose leaf tea when I feel unwell and for years I’ve always tried to keep a bagged lemon ginger in my stash for those times.

I’m not replacing this one – I prefer the new Lemon Ginger in terms of flavour, and I have some other bagged lemon gingers for my “sick tea” needs but I’m happy it’s back; I know a lot of people loved this one!