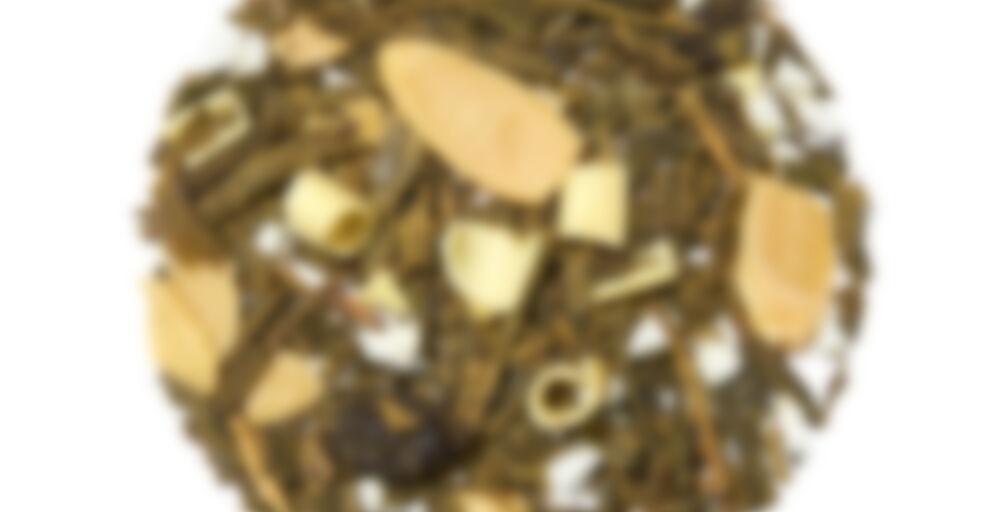 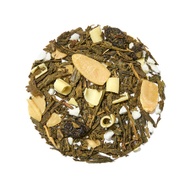 We sneakily boosted this creamy blend of green tea, white chocolate and almonds with a double scoop of matcha powder for added energy and benefits. It’s deliciously sweet and nutty, without being over-the-top decadent – perfect for satisfying your dessert cravings. And with its refreshing matcha green tea flavour, you can have your ice cream and sip it too.

I decided I would try this tea as it sounded good. About 40% of the way through, my tongue started to burn and swell up. I believe this is due to the inclusion of Stevia and natural flavoring. I have NOT had a problem with these additives for a long time and never this bad. Suddenly all of DavidsTeas that have them are bothering me. Threw out the envelope.

From what I remember about this cup it had a really lovely sweet vanilla flavor. I was definitely reminded of vanilla ice cream.

Tastes like matcha and ice cream with a nutty after taste. So Yum

This was one of the online exclusives I couldn’t resist picking up… the ratings aren’t amazing, and I’m 99% sure I’ve had it before, but I didn’t find any trace of it while organizing teas, and I had no rating/note about it, and it sounds so yummy! So either I haven’t actually had it before, or I have, and it was either a casualty of the work mice, or I liked it enough that I finished my sample during the time I wasn’t reviewing on Steepster. Who knows.

Anyhow, it smelled delicious in the bag. Like creamy, vanilla bean ice cream. And as luck would have it, it also tastes like that! I can’t really taste any matcha or green tea base, but there’s lots of creamy vanilla, and I like it. At least in this cup, the stevia is not sweet enough to be off putting or to linger overly long, which is good.

I’ll have to see if subsequent cups are this good, but this is not a bad tea to have 50g of, at least from my first impression.

I once sat through a tabletop game (Shadowrun) eating a small tub of matcha icecream all to myself. …The taste isn’t actually too far off.

There’s a swirl of powdery matcha that comes off the tea and goes right through your strainer, as expected. The almond slivers and sugar really add to the vanilla icecream base, and the matcha is a nice, sweet, very ‘cooking matcha’ texture.

I picked up a bag of this after someone from my gaming group shared their stash with me. Pretty nice hot, but when I forgot it for a few hours and started sipping it again it isn’t too bad cold, either. Could make for an interesting iced tea… You’d have to shake it each time, though.

I’m currently in a love-hate relationship with this tea. It tastes a lot like the funfetti birthday cake mix I had at every birthday party as a child. The flavors that really come out to me are the almonds and white chocolate. It is very sweet, almost sickly sweet to me. The smell of the tea in the tin when it first comes in is a delight. I would only recommend this tea to people that enjoy sweet and rather strong tea.

Well, I’ve waited long enough to finally try this one. Luckily my store got more of it so I bought about 30g. This one has a scent that does remind me of ice cream – but tasting it, it tastes more like almonds and green tea. I’m not sure I taste the matcha at all in this. Adding some sugar makes it taste more like a nutty ice cream to me. Not bad, I’m glad I got to try it.

I’m not in love with this tea yet, but bought the 130g paper package so I could have a cute pen holder at work. Possibly getting back into the Steepster groove after years away? O:

I used boiling water I topped with cold water, so I may have cooled it down too much, it was more on the warm side. I’m getting a nutty flavour reminiscent of an old discontinued blend, Secret Weapon. Most of the flavour is overpowered by the stevia to me, a little cloying in the back of the throat – but I will try it iced next and see if that makes a difference! I was expecting more of a “green” flavour from the green tea and matcha, but perhaps a higher temp water will achieve that.

I did not add any sweetener or milk, and overall find this to be too sweet for my tastes.

Hey guys!!! Thanks for the warm welcome :D
Happy to be back

I tried a sample of it in hot form at the store. I liked the sample, so decided to get some more to experiment with. I tried it as a hot latte and while it was drinkable, it just wasn’t my favorite. But then I tried it iced and it sure made my taste buds make a happy dance. It was like drinking vanilla ice cream. A perfect dessert tea. The only problem is that I had to push the liquid out of the strainer part of my perfect steeper. It kept on getting plugged up from the matcha powder I guess.

As a whole, this collection kind of makes me feel conflicted. I mean, I like matcha a lot but I also don’t like green tea and most of the teas in this collection are green teas. I wanted to like this one though; it sounds like an awesome concept.

The dry leaf smells pretty good too; definitely sweet and nutty from the almond with the same sort of creamy aroma that Let It Snow had, probably from the white chocolate curls that they both have in common. Steeped up? It’s not for me. I mean, my issue actually isn’t with the green tea itself – it just tastes like a stevia bomb has gone off in my mouth. Usually I don’t even register the taste of stevia in most teas, but this is really intense to me so I can’t even imagine how someone who’s much more sensitive to stevia would react to it.

I’ll likely try it a few more times just to be sure – but I’m probably just gonna have to pass on this one overall. Can’t love ’em all.

Friendly reminder that I do not numerically rate DAVIDsTEA blends as I’m currently employed there and it would be an obvious conflict of interest. Any blends you see with numerical ratings were rated prior to my employment there. These reviews are a reflection of my personal thoughts regarding the teas, and not the company’s.

I was a bit disappointing with the new collection because I’m also not a big matcha fan or green tea fan. Zestfully green of course is tasty, but the new ones are less appealing. Milk and stevia? no thanks. I wish they would stop putting stevia, whey, and lactose powder in teas.

I’m of different minds on this; personally I certainly wish there was less stevia/hibiscus/licorice roots in blends because it’s something I don’t like. However, you’d be surprised by the amount of people who actually come into the store specifically looking for those ingredients. There’s DEFINITELY a demand for that. So, I don’t think total elimination of those ingredients is the solution – but maybe just working on finding a better balance?

Stevia definitely should not go anywhere near green tea.

Ms. Strange, people actually come in looking for stevia in teas? I admit, I’d be one looking for hibiscus. I drink it straight up often, but honestly, in blends, it really varies for me. Most of the red herbal blends kind of taste the same.

They really do. It took a lot of getting used to, on my part, for sure. Of those three divisive ingredients, licorice root is probably the one that people come in looking for the most though.