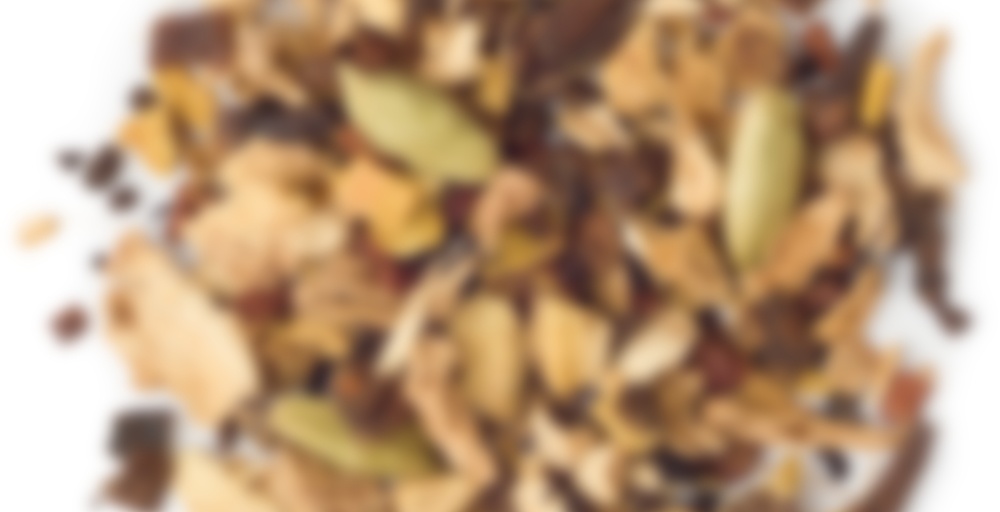 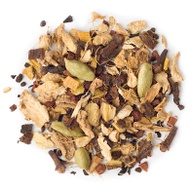 In India, spiced chais are a big part of everyday life. Recipes vary from region to region and from household to household, with every family fiercely protecting their secret formulas. And after trying dozens of different spice blends, David finally found his perfect, signature mix. He started with a rich black tea base and blended in a spicy combo of cinnamon, ginger, cardamom, cloves and black pepper. Then he added a touch of sweetness from licorice root and vanilla. The best part? It’s certified organic. We told you it was perfect…

I love chai and I love licorice so it would seem natural that I would love this chai. I like it, a lot, but the spicy-ness is overwhelmed by the licorice. So the taste, the aroma is good, but if you are looking for a chai, the mighty in this is the licorice.

Finished off my last two sachets of this as a cold brew; it was a super weird brew because the exact right combination of flavour notes was pulled out to cause this to taste like root beer! It was the best infusion of this tea that I’ve ever had – and a perfect way to finish it off.

I love this tea! Now this is not your original Chai. If you are looking for a plain, traditional chai tea maybe try something else. This is my favorite tea for my “grab and go”, perfect for letting it steep in the thermos on my way to work. The longer this steeps the better it tastes and the bolder the flavor. I find when I do steep it according to the recommended directions for only 4 minutes it doesn’t quite bring out the wonderful spices infused in it. This tea is full of body and when steeped longer the flavor is bold and has full character of the cloves, cinnamon, and ginger. This tea naturally has a bit of sweetness to it and a hint of vanilla.

The smell of the dry leaves is enticing very aromatic
The liquor is a red tinged brown. The aroma is not as strong as the dry leaves but still aromatic.

It’s a good thing that I didn’t write a review on this tea right away yesterday. The first mug/impression wasn’t the best.

The dry leaf smells amazing. So many spices going on here. Ginger, then pepper, then cloves and cinnamon in unison, and a sweetness dancing around these other notes.

Yesterday’s Nordic mug got 6g of leaf and it was so weak. Watered down spices and sweet licorice root. It just wasn’t balanced. Seeing that I bought 16g, I thought I’d polish off the rest today just to get it out of the way. Putting 10g of leaf into the mug ended up being the best thing because I noticed that it’s better balanced now. The spices intensified while the licorice stayed the same. It could very well be that there simply wasn’t as much licorice ratio-wise in the remaining 10g but it seems that more leaf = stronger spices in general which = balancing out the sweet licorice, which can only reach a certain level of sweetness. I don’t know. Maybe I’m nuts.

But with fat-free creamer, taste-wise, the spices are layered in the same way as they smell. That is, the ginger is the strongest, followed by pepper, etc. This tea got terrible reviews but I don’t seem to mind it this way. Would I buy more? Probably not. But it’s not bad at all. Perhaps it depends on how sensitive you are to licorice root. It is sweet, yes, but I’ve tasted licorice root-laced teas which were by far cloyingly sweeter and imbalanced.

Sometimes I think chai makers get a little excited and attempt to dump every spice in the cabinet into the blend. Less is more in my chai-pinion.

god yeah… or if not all the spices, 17 metric tons of cloves…

Or cinnamon overload. Too many chais end up tasting like cinnamon milk.

Cinnamon milk with a numb tongue from all the cloves. :D

I was interested in DT’s new chai blends since I’m a big fan of chais in general. My local DT store was sampling this tea at their store when I dropped by (after work I’ll often cut through the mall on my way home and I’ll usually swing by to try whatever samples they have going that day – I think they all know me by name there at this point).

As it turns out it was a lucky thing that I was able to try it for free because it really wasn’t my thing. It starts off quite nice with a good balance of spice but then the licorice hits and totally ruins it. Davids Tea seems to have this love-affair with licorice root recently and while I don’t dislike the ingredient on principle DT always seems to over-do it. Maybe it isn’t as bad with milk, but I don’t want to shell out the money to try it that way and be disappointed.

Back in the dark ages when I drank bagged tea, Chai used to be one of my favourites. While I have since seen the light and “graduated” to the world of loose leaf, I still haven’t been able to find a Chai that I like. Other blends I have tried have either had too much bold, hot spices for my taste (e.g. pepper), or have been so bland that I couldn’t even really make out any of the spices in the tea. I was hopeful when I went to my local DAVIDsTEA and asked if they had a Chai that wasn’t too bold, but still had some flavour. They recommended this Chai & Mighty to me, at the time a new addition to their lineup. The tea smelt good, like I thought Chai should smell, and I love vanilla, so its inclusion made me optimistic. Unfortunately, this turned out to be my least favourite Chai, and perhaps even tea, I’ve ever tasted. This tea gave me what I can only describe as an overwhelming soapy taste, which was so dominant that I couldn’t taste anything else. In addition, I experienced a burning sensation on my tongue and throat as I was drinking it, making it somewhat unpleasant. I suspect that maybe I’m “sensitive” to ginger and that this blend has more than usual, but I’m not certain. If ginger doesn’t bother you in the same way (or whatever it was that my tastebuds didn’t like), you’ll quite likely enjoy this tea more than I did. If, however, you like less ginger in your Chai, I would advise looking elsewhere.

Oh man, I know that exact sensation of the burning throat. It might be some sort of hot pepper or peppercorn flavour as well. I had the cinnamon heart tea from DAVIDs last year and felt the same way.

Have you thought of making your own chai at home, using whole spices steeped in milk?

I was on my way from visiting one doctor only to go visit another and felt in need of some warm liquid energy. Thus, chai!
To be honest this one had me a bit leery. Something didn’t seem quite right by scent. But I gave it a go… and well look at that, it was pretty decent! I guess I’m still suspicious of vanilla, after my few bad experiences with it in the past.
Funny, the official DT note for this tea says the ‘nilla is merely a “hint” but I say its more like a whack in the ’buds. Seriously, there was plenty to go around.
The other traditional chai spices were hangin around of course. They were pleasant enough though a little coppery overall, or that could have been how they interacted with the black base.
Also, as the tea became lukewarm, there was a distinct creamy note that emerged, layered alongside the ’nilla. Kinda like the creamy part of a vanilla infused cookie, with that certain texture. I can’t recall what brand my Babcia used to buy as a kid, but it reminded me of that, rather specifically!
Aaaannnyhow. Despite my enjoyment of this one, I can’t say its something I feel the need to have in my cupboard as it doesn’t quite fit what I was seeking as a mainstay.
Even still, I recommend trying it!

Are you a fan of any of their other chai teas? I had Saigon Chai a while ago and enjoyed it, but I’ve had terrible experiences with chai being too sweet. Was this one extra sweet at the end?

Hmmm. I didn’t find it overly sweet myself. Not like the Honeycrisp apple I mentioned earlier. I asked them to add just a few drops of agave and it was perfect for me.
There was one chai from there that I really enjoyed in the past but I can’t recall which one. I’ve been trying to remember for awhile now!

This tea smells and looks great. I was excited by finding a new chai and had high hopes of making it my mainstay chai. Unfortunately at the time of purchase I didn’t notice that licorice root was one of the ingredients. I didn’t notice this until I was already brewing it. I’ve have had some luck with teas that contained licorice and remained palatable. Unfortuntely the licorice taste overpowered and killed the flavor of everything else, making this a disgusting cup that I couldn’t get past the first few mouthfuls. It left an unpleasant aftertaste in my mouth both literally and figuratively.

Keeping my rating on this one, I think! I had my sample steep for longer this time, which was nice, but I definitely got more of a licorice root taste, which was not so nice, LOL. I had to use a bit more milk to mellow that out. Still a yummy chai, and I might try it as a latte.

Liqueur: Brown with a red tinge. Smells like a very traditional chai, but with a hint of vanilla.

Flavour: The black tea gives this chai a bold base. The vanilla sweetens it up a bit.

This would have been perfect without the licorice.