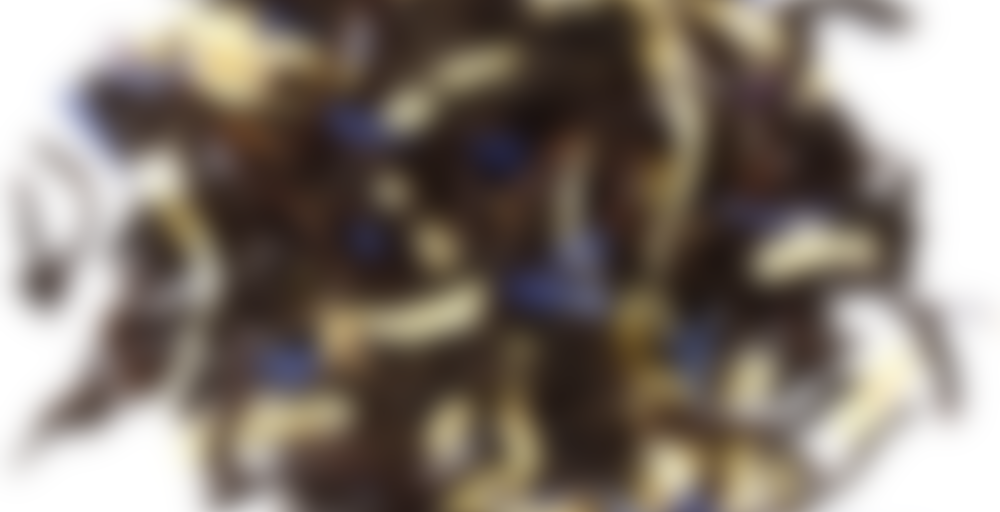 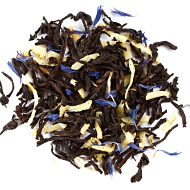 Hot buttered rum is so delicious we want it all day long. Unfortunately, most employers frown on workplace drunkenness, so we came up with this rich and creamy alternative. Toasted coconut and vanilla beans mingle with black tea in a caramelized caress of flavours. Decadent hot or iced, it also blends perfectly with dark rum, brown sugar and a dash of milk – so go ahead and indulge your inner pirate, off the clock. (MK Kosher)

I wasn’t able to purchase this when it was re-released, but was finally able to purchase a 50g pack from someone. This does have a slight rumminess and some butterscotch, but I’m mostly getting coconut. Some sips I really like this and some sips are just not working. Added a bit of oat milk, hoping it would bring out more of the butterscotch flavor. Instead, it accentuated the coconut even more. Probably not a tea I need to drink again, but glad I finally got to taste it!

Phew!!! This tea smells strong like alcohol. I have never had rum before, so I cannot comment on how accurately it smells like it, but I did not find the smell pleasant (but then again, I do not find the smell of alcohol pleasant either). But I am surprised they could capture such a strong alcohol fragrance in a tea.

To be honest, I am not sure how to feel about this tea. I added milk and sugar to do this and made it stove-top style. It had some good coconut and vanilla notes with a hint of alcohol near the end.

I know many people described this as a buttered rum lifesaver? I have never had that or buttered rum flavoured anything before, but I guess this has a candy like quality to it if you add milk and sugar.

I will not repurchase this because I did not enjoy this as a latte, which is what I mostly bought it for. But I think that might come down to my taste buds since I mostly like my lattes to be spicy, strong masala chai flavours.

I need to try this straight to get an accurate assessment of it. But overall, I am not a fan. But it is palatable. I will try to finish this off.

There are a few returning fan favourites teas on the site right now for Winter including Toasted Walnut, Chocolate Covered Almond, and Banana Nut Bread – but this is the one that I personally care about the most!

It was one of the first teas I ever tried from DT, and I haven’t had it in years so this is a MAJOR blast of nostalgia for me. I remember it tasting so distinctly like the Buttered Rum Lifesavers, which are definitely my favourite kind of Lifesaver. Very butterscotch heavy in flavour, and really creamy as well. Short tangent about me – when I was very young I had my tonsils removed, and I spent Christmas in the hospital. I don’t remember who, but someone brought me this “Lifesavers Book” that had several rolls of those Buttered Rum Lifesaver candies in it, and I think I finished the entire book during my hospital stay.

So… does this taste as amazing as it did in the past!? Well… I think so…!?

That might seem like a strange answer – either it does or it doesn’t right!? I mean, it certainly tastes very familiar and I think it still has the same rich butterscotch and coconut flavours that I recall – but it’s been like four years, at least, since I last had this tea and my tastes have definitely changed a lot in those four years so it’s hard for me to say whether there’s just subtle differences to the blend, like the black tea seeming more present and a bit more tannic or the coconut not being quite as sweet, or if it’s just that my perception has differed – and honestly I’ll likely never know.

With all of that said… I still think it’s a great tea, and I totally brought home a 50g bag for myself. I’m pretty busy in December with the focus on advent season, but I do really want to find time to try this as either a normal latter or an eggnog latte because I remember it being fucking sublime when prepared that way.

I hope it makes other longtime fans of this blend happy to see it back, and I hope people who are experiencing it for the first time feel the magic the same way I did so many years ago!

EDIT: I wanted to mention, this blend was originally Organic but it’s not Organic anymore. I hope people will understand the change, given how much the regulations surrounding Organic teas has changed in the last eight years from when this tea was originally developed.

As far as Steepster goes, there are two entries for this blend (one was a duplicate), but I can’t edit the “non duplicate” entry to take out the organic from the name because the duplicate version didn’t have the organic and so now the unique webcode, or whatever the fancy IT term is, for “Buttered Rum” is registered to the duplicate entry – which is the one I’m using now. So… I’m just going to try the duplicate entry as the “correct” one for the new non Organic version…

Yasss the Lifesavers Book! I used to get those in my stocking! Now I’ll have to go find one… XD

Usually I just add “[duplicate]” to the name of the duplicated one, but if one’s organic and one isn’t maybe there should be two entries?

As long as you change this entry first, you should be able to. The number is the important part of the link and that’s independent of the name. But obviously the system won’t let you have two teas with the same name and same company.

Those Lifesaver Books have been around since the beginning of time! I remember them from my childhood, too, and I think the Buttered Rum flavor was always my favorite as well. I remember a story my dad told me about him receiving an all “Wild Cherry” Lifesaver Book at Christmas when he was a child (so… in the 50s? Early 60s?) and he ate them all in one sitting and got extremely sick. To this day he can’t stand that “artificial cherry” flavor in foods.

I remember those Lifesaver Books as well, and indeed those buttered rum/butterscotch ones were the best!

He lived tea-sipper, but has never been able to eat artificial cherry-flavored anything since. (Candies, sodas, etc.)

My coconut has turned, and it’s starting to get less pleasant to drink. That being said, when I bought it the coconut seemed stale, almost soapy. I’m glad DT’s newer teas use better coconut than this blend ever did.

Boiling 2 min, 0 sec
Yours I Like This
9 likes
3 comments
Edit

Just how long does coconut typically last in a tea blend? I’m a known hoarder, so…

I think it may depend on the type of coconut and how big the pieces are. I would think that smaller shredded coconut, like what is contained in this particular blend, would go off faster.

I threw a few teaspoons of this into my Hario filter-in cold-brew bottle on Sunday, put it in the fridge, and forgot about it until last night (Wednesday). The flavor hadn’t gone off and the tea wasn’t bitter at all. It had such lovely light butterscotch and coconut notes. I drank the entire 750 ml with dinner. :P It was really yummy. I might cold-steep black teas more often.

This was pretty tasty.

Today was an early mini-Spring. It got up to 57 in Fargo North Dakota USA in February! I had a window open, grilled a steak, and sweated. Not a day for hot tea, right? Well, after the sun went down I closed the window and sat down to write. But it seemed to get colder, and I realized that I had opened two windows and closed only one. So time for hot tea after all. This one sounds absolutely lovely. My favorite lifesavers are the butter rum ones, and I like butterscotch hard candies too. I’m disappointed to not be able to smell or taste this one. It sounds heavenly.

So, what did I think of it? It was good, if not great. A teeny bit of bitterness at the end of the sip. Next time I may add a lump of rock sugar. I don’t think I’ll rush out and buy 100 grams of this, but I’ll finish the 50 grams that I have without trouble.

This tea smells of pina colada and I do not like the smell of pina coladas! The taste however, was very different. I taste butter, coconut and vanilla! It was divine!! I also like to put Coconut creme creamer in this tea. It was sooo good!

Wow does this smell good! Only thing is I notices some other reviewers said the same thing I’m thinking right now… it doesn’t taste like it smells, and you need to add a tiny bit of sugar. I don’t usually add any sugar or cream to my tea but I feel like this one needs both. The smell is SO amazing, just like a buttery rum cake, but it just doesn’t translate in a black cup. I close my eyes and this sends me back to the Caribbean!

The smell of this tea really blew me away. It truly does smell like a buttery rum. I tried it without milk or sugar, and the smell was enough to keep me happy, even though the taste didn’t really taste like it smelled. However, when I added just the tiniest bit of cream and sugar, it really morphed into something different, and only then did it live up to its name. Creamy texture and sweet vanilla/coconut/butterscotch flavours were amplified tenfold. It really is one of my faves for the upcoming Fall season.