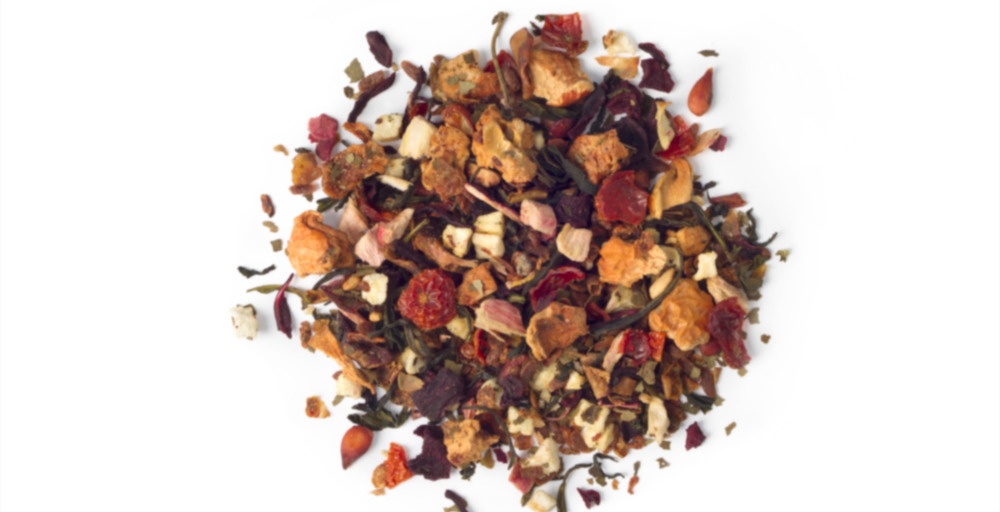 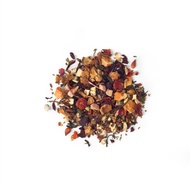 For thousands of year, pomegranates have been revered as a symbol of love, fertility and prosperity. Today, people love them because they’re one of the healthiest things you can eat. But the real reason they’ve won our hearts is their refreshingly sweet and tangy taste. Especially when we combine them with green tea, sweet apple and a tart hint of rhubarb, rosehips and hibiscus. The result? An all-natural hot pink tea that’s deliciously fruity and undeniably good for you. It’s the pom diggity. (MK Kosher)

This is one of my favorite teas, and I’m so sad DAVIDsTEA discontinued it. I love that it turns into a reddish hue and that it’s naturally sweet and tart, and that it’s lovely iced or hot. I also kind of like the fact that it’s more of an herbal infusion than a green tea blend – there’s definitely more extra stuff than tea leaves.

In my effort to organize by tea cupboard a little, I’ve been clearing out my old teas, and this one my boyfriend got for me on my birthday back in 2014, so it’s bittersweet finishing this off. I never remembered liking having this as tea of the day in the summer though, I always found they made it really weak and the agave managed to always concentrate itself at the bottom no matter how much I stirred.

This tea smells strongly of the rosehips and hibiscus in it, I’m not really getting the pomegranate sadly. The tea turns a nice reddish color which I will probably attribute to the hibiscus. It also tastes quite refreshing, it’s got just enough sweetness with some tart from the pomegranate/hibiscus to balance it out. The floral notes in the background are very nice too.

Overall, I’m sad I can’t get this tea anymore because I’m really enjoying this over ice. Perhaps David’s will bring back another pomegranate tea this coming summer, though.

Another sipdown! This smells like those pomegranate vitamin c cough drops. Not the best association, but not necessarily a bad one either. Just not something I would ever want to drink a cup of XD.

It tastes….like it smells, medicinal hiding under fake fruit flavor. Meh. Glad to see it gone.

edit Bananas. Why am I tasting bananas?

Smells like Robitussin. Tastes like fruit with a nice sour tang. Decent tea and very appropriate for the lovely spring weather we’re (finally) having.

I wasn’t a fan of this on my first brew. I just got some as a gift, so I guess I’ll be brewing some more. I will likely just do a cold brew and add lemonade to it to take the gross taste out…

Not my favorite tea. Part of their green iced tea collection. too much apple. slightly bitter and astringent.

I figured this would make a good cold brew, but it’s basically the same as hot: a fruit roll up with too much apple. I bought this under the impression that I liked it and clearly I was mistaken or my tastes have changed. It’s not awful, but it’s not what I want.

I loved the smell of the dry tea. It smelled tart and fruity. But when I made it today it was strange. I doesn’t BAD, but there’s something off about the flavour that I dont like. Too artificial maybe? Maybe I’m just not into pomegranate flavour?

I actually feel like I want to give this one away. I’m sure someone will enjoy it more than me.

Pre-drinking:
About half a year back I had one of my worst tea experiences; it was an organic pomegranate tea in my mom’s cupboard. I can’t remember where it was from. Back then I decided that I’d try to make a sort of tea slushie, freezing a cup of it and then blending it the next day. The results were.. not good. I think that day I swore off both organic teas and basically anything pomegranate.
However, I’ve since been gifted many delicious organic teas, along with which I got a small taste of this. I’m having my first cup of pomegranate tea since that traumatic time.

I made the tea far too hot, so I’ve had it sitting on my desk for about fifteen minutes, simply taking in the aroma. It first somewhat disgusted me, but it seemed to grow on me a bit. I always used to like the actual fruit.

First sip:
I’m struck first by the apple flavour, and a blueberry taste. Acai berry as well. Is there actually pomegranate in this? I think I ended up making it too strong; I added a bit of water to try to salvage it, to limited avail. I think it would have been hard to make a tea that actually tasted like pomegranate. It’s very sweet, which I’m sure would definitely appeal to lots of people.

Cup finished:
I think my past got in the way of there being any chance of truly enjoying this. Moreover, I think I’ve yet to find a fruity tea from Davidstea that I’ve thought that I could frequently own. They always seem to leave me with a sort of dry mouth and that… You know that feeling that cranberry juice leaves in your throat? That. I should probably be making them weaker but I’ve never been a weak tea sort of guy. Overall, I would drink again but not if I had to pay for it.

I wasn’t expecting to like this tea, but it quickly became my favourite. The rose colour and fruity taste make it an easy drinker. It’s sweet with a slightly tart after taste, and needs nothing added to it. I think this tea will be a year round staple in my cupboard and I look forward to trying it over ice in the summer.