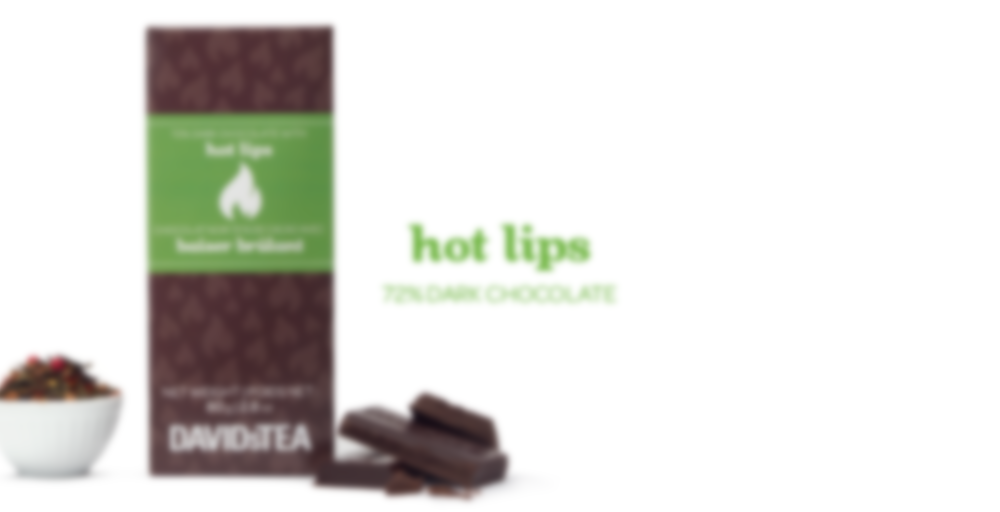 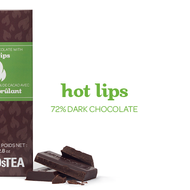 We worked with a local Montreal chocolatier to bring two of our very favourite things together: tea and chocolate. And the results are totally out of this world. Each bar combines the highest quality imported chocolate with our loose leaf tea blends – it just doesn’t get sweeter than that. This bar blends rich72% dark chocolate with our cinnamon-spice Hot Lips green tea. With hot cinnamon, pink peppercorns and chili peppers, it packs a punch with just the right amount of spice.

That being said, this chocolate bar really wowed me. I’m a fan of Hot Lips and the flavor really carried through. The front of the bite is all chocolate, but then it mellows and out comes the hot lips, a sweet cinnamon that is so, so good. It burns just a bit and then it’s gone.

This is good. I won’t be buying more due to it being a dark chocolate, but it is very good.

Finished this off last night. I’ve been storing it in the fridge and I think it helps a lot. It’s not a crumbly dry mess anymore and the tea gives a pleasant sweet heat to the dark chocolate. This one grew on me quite a bit!

My favorite chocolate (perhaps in the world) is the Firecracker bar from a company who’s name escapes me at the moment. It has chili, sea salt and popping candy. It is amazing! Now all spicy chili chocolate is compared to that in my mind, which is a little unfair to all the others.

I can taste dark chocolate first, then some cinnamon and then a really weak chili. I do like a lot of spice, but this almost has none. My mouth is just barely hot and only if I really think about it. The chocolate it’s self doesn’t strike me as anything impressive on it’s own either. There is a little more spice on the end when all the chocolate has melted away and I crunch into the remaining bits of chili. The pepper shells are a little rough on the top of my mouth as I turn the chocolate over to suck at the melty bits leaving my mouth a little raw. I don’t taste any tea in the chocolate, just the added flavors of the tea which is disappointing. It’s kind of a mediocre generic chili chocolate bar, similar to what I could find at a pharmacy or grocery store for maybe half the price.

It was an interesting venture, but I think David’s should stick to tea.

Oh my. If you can recall the name of that candy bar company, please share. I’m pretty much sold on anything with chocolate and chili, but the salt and popping candy sound amazing!

Excellent! Thanks for the link!

This is the second tea-infused chocolate I tried after DT’s White Chocolate Matcha Matsu (blech), and I like this one a lot more.

That said, I’m not getting much of the Hot Lips tea flavour here. I can smell cinnamon when I hold the chocolate square up to my nose, but I don’t taste very much cinnamon when I eat it. The most dominant taste is the dark chocolate, which is rich and creamy (as it should be). I can’t taste the tea leaves at all, though I can certainly feel the texture that the ground-up leaves add to the chocolate (somewhat gritty, but not unpleasantly so). There’s a bit of a green tea flavour in the aftertaste. There’s also a hint of spiciness, but just the slightest tinge.

All told, this is a nice rich dark chocolate, but I wouldn’t have guessed it to have any special flavouring if I didn’t know it was from David’s.