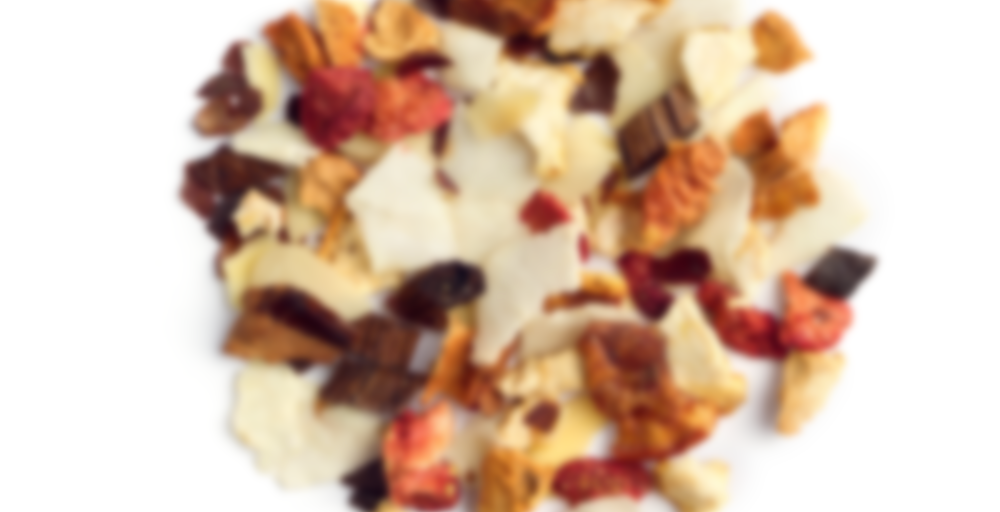 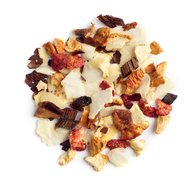 with 92 Ratings Rate this tea Rate This Tea

The hottest tea north of Havana

Its name is Copa, it is a tea blend. Big banana chips take centre stage, with a supporting cast of coconut, cacao, almonds, sweet apple, and strawberry pieces. Who could ask for more? One sip and you’ll see why this blend is a real star. It’s a fruity, sweet, exotically delicious way to heat things up. So go ahead and try a cup of Copabanana…you’ll fall in love.

A huge thanks to ch3rryprincess for sending me a sample of this tea I’ve been so curious about (also, for the GIANT bag of Buttercream!! Oh, I’m so thrilled you have no idea!)

Anyhow, I brewed some of this up last night, and the smell overwhelmingly reminded me of DT’s Banana Nut Bread. Which was okay, but not a winner for me. The flavour was alright, quite banana-y, and coconutty, with some other flavours as well… but it really didn’t work for me. It was almost like a cross between Tropicalia and Banana Nut Bread. I’m drinking the second infusion right now, and am definitely underwhelmed. Don’t feel like I missed anything by not getting more of this tea, that’s for sure!

She sent me the majority of a 25g bag of Buttercream!!! SO AWESOME! Three people have now been super generous and sent me their leftover/unwanted Buttercream… Steepster is awesome :D

Why would anyone not want Buttercream? It is super duper amazing awesome!

I wasn’t a fan of it lol

thank you courtney for this sample. Even though i don’t much love coconut, i wanted to try this one just in case. While this smells really nice…as a tea it’s pretty gross. There’s a slimy oily film on the top of this tea that makes me cringe. totally glad i got to try this but uh…yeah this small sample was a good amount! :)

Sorry! Oh dear. I love it mixed with Guayusa, but i find it slightly lacking on it’s own, though I can still drink it haha.

Oh dear. Not looking forward to my sample of this, haha!

Lol! I really didn’t like this one hot. Saving the rest to try it cold once my takeya iced tea maker gets here!

And another sipdown! (80) This one was easy because it’s not that special. It’s ok. I enjoy it. But I won’t miss it.

Unless I had Malibu in it? That might help.

this is a tea i would never buy because i don’t eat banana-flavored anything. i only eat bananas.
but great that Davids sent me one of their little sample pouches cuz now i can try it despite my banana feelings! and i always wanna try a new tea. no matter what i suspect i MIGHT think of it i still ALWAYS wanna try it once.

but alas, yes, i mean, it DOES taste like banana. and not really fake tasting either. almost like they squeezed a banana’s juice out. and that is a big compliment coming from me :) so if you like bananas that aren’t bananas, you should totally buy this!

Know what you mean, in reverse. I don’t like to eat bananas, but I like banana flavoring.

Haha, I like trying everything once as well. I’ve actually found a few unexpected things I like that way! For example, Laoshan Black (I disliked black teas, especially straight!), and DavidsTea’s Dulce & Banana (hated chamomile… or so I thought.)

hah interesting! cuz Dulce & Banana was the one where i realized i hate chamomile. i was like ‘this tea should be yummy, so why can’t i even like it’s scent?’ it wasn’t the banana that was turning me off, but something else, and that’s when i finally understood.
i would DEFINITELY drink Copabanana before Dulce&Banana. i might even say i like this banana tea! maybe i should try Banana Nut Bread. people seem to be comparing them a little.
i did go through the trouble to take my soggy used Copabanana tea bag the whole way home so i could start a cold brew. :)

I didn’t drink Copabanana and Banana Nut Bread close enough together to really remember how they differed. Other than Banana Nut Bread being great at clogging up filters… I don’t really mind either, but herbals just don’t seem to be my thing anymore (and they’re so expensive by weight! And don’t re-steep well.)

Duuude. This one smells amazing. Like some sort of homemade banana baked good my mom would be baking. Maybe banana chocolate chip loaf. Yum. I can only hope it will taste as it smells. Though I’m pretty sure I could just have the scent waft at me all evening and be perfectly happy.

Oh yes, this one is delicious. I don’t know that it tastes as it smells. But it does taste good. Very good. I imagine it would be good chilled as well but for now am I enjoying it hot. I know what I’ll be drinking for the rest of the evening (perhaps interspersed with Coconut Oolong).

Update: This one is pretty good cold but I think I may prefer it hot. The chocolate comes out a bit more when it’s hot. Yes the flavours are definitely more muted when it’s chilled. And on that note, I’ll steep myself a hot cup of this now.

I am super excited for this one, too. I have a little bit more of Banana Nut Bread, and I really enjoy it as an evening treat. So this will be a good replacement!

I can’t wait to try this one out too (once I finsih my coconut oolong <3). I should drink more herbals so I’m looking forward to this joining Cocomint Cream on the shelf!

Hmm, not sure I’m very keen on this one. I’m drinking an iced cup and a hot cup side by side. Both have a scummy surface, likely from the coconut.

The iced cup tastes primarily of banana, with frozen stale chocolate, almonds, and coconut flakes. That’s ok, but I’m not into the finishing flavour it leaves in my mouth- fruity and hinting at bitter, like orange flavoured coconut water, mixed with cocoa. Aftertaste reminds me of an Orange Julius.

I like the baked banana dessert that I get from from the hot cup. Some things melt together better here, like the cocoa. The orange coconut water isn’t as consistent. The aftertaste reminds me of an Orange Julius though. I’m glad I only picked up a small sample though; I think there may be too many things going on here (chocolate orange, chocolate almond banana, coconut water, orange banana smoothie).

I’m just trying this one now that Courtney sent me a sample of a while back – thank you! This blend sounded like something worth trying.. the ingredients sounded nice together and NO HIBISCUS! I think someone should come up with a ‘no hibiscus’ dance. Steeped for a few minutes, the color is a mellow yellow. The flavor is sweet yet mild – mainly banana with a hint of coconut – exactly what the name suggests. A hint of the orange and strawberry give it something more. This reminds me of a smoothie or something! I like it!

I would gladly do the no hibiscus dance!

Totally fell asleep drinking this last night. I managed to get the bits into a jar to cold-brew before I actually went to bed, though. It was delicious hot, as usual, and I’m looking forward to trying it cold as well.

I just wish it wasn’t so dang expensive!

My second cold brew! And I have to tell you I was a little nervous after the way Kokomo green turned out. I really didn’t like this tea hot, but as a cold brew, it’s not bad. Probably because it’s an herbal, so no threat of bitterness from the tea leaves. It smells delicious. The taste is pretty much A WHOLE LOT of banana! So, if you like banana-flavored drinks, this is for you! Personally, I’m not sure what I think. I also got some nuttiness, maybe from the almonds or coconut, or maybe even the banana chips. I also decided it was best with a little sweetener. Couldn’t really tell if I could taste the other ingredients. Not bad, but I don’t know how often I’ll be in the mood for it. It makes me feel better about cold brews, though! Will have to try some other teas this way!

I wish Fridays meant something to me. For me it’s just a regular work day with the promise of another work day (albeit much busier) after that.

Maybe when I’ve worked there long enough, I can put in a schedule change for Monday-Friday only. :D

What am I missing here? My Copabanana tasted like watery nothingness and I used two teaspoons of the stuff! Did I get a bad batch? I even let it steep for eight full minutes.

I really enjoyed it. But it is light. Maybe you got a bad distrubtion (OMG I can’t spell today) of the ingredients in your cup. Try it again.

I shall give it another go. I did have quite a few banana chips and coconut in my last infusion. Should I try it iced?

I haven’t tried it iced so not sure. It would likely be pretty good iced. Maybe leave the tea in while you drink it. I think that is what I did with mine hot.

most epic last line of a review ever.