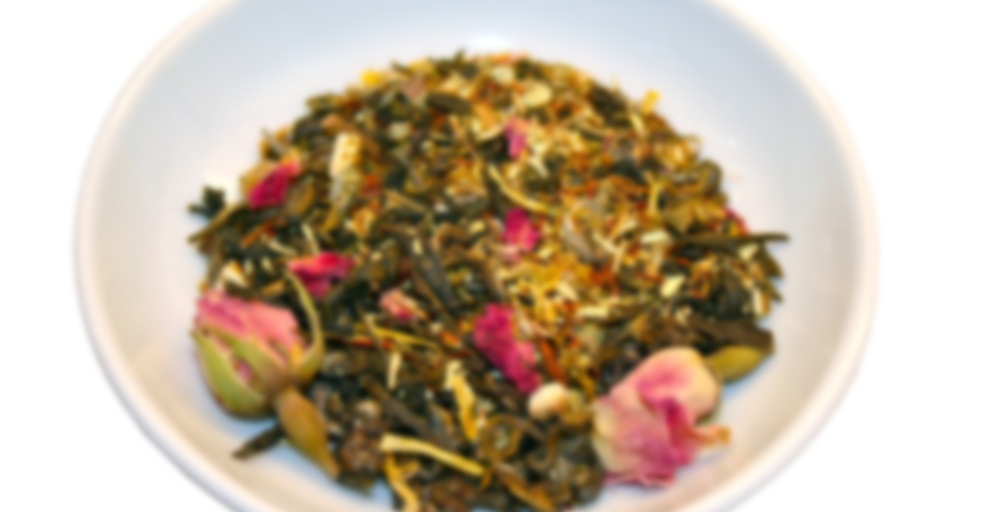 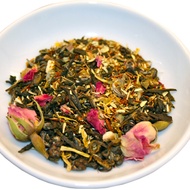 This has a sweet floral taste and contains one of the rarest and finest handpicked teas in the world, White Silver Needle from China’s Fujian province, and Green Rooibos Tropica, an extemely high anti-oxidant tea from South Africa.

I named it after the what locals call their mountain town Chefchaouen because seeing it was indeed rare and a once in a lifetime experience.

I received a sample to review and I must say I am looking forward to it, of course!!!

The tins and labels are lovely!

This particular blend is very aromatic and I can clearly see all of the ingredients. I must say I am picking up the scent of the ‘Tropics’ more than the floral prior to infusion BUT these roses are HUGE!!!!!

Almost done with the infusion and YES! I can smell the ROSES more as the infusion progresses! I would say equal sniffs of tropics and roses at this point!

Post infusion the liquid is alight brown and the post infusion scent is a tad more rose than tropics! Very neat scent!

The taste is HIGHLY rose with a fair amount of tropical taste to it as well. The Rooibos taste almost seems barely there which I find fascinating! It seems ANY Rooibos I have EVER had you can ALWAYS tell it’s a Rooibos! This…the taste of the rooibos is there but very much in the background. I would HIGHLY suggest this for people who have had not-so-good experiences with Rooibos in the past…but…I have to say it’s a highly florally-tasting flavor. I think the Rooibos does give it a tad of sweetness – possibly chopping off any weird floral after taste one may receive in other floral blends…if you know what I mean!

I’m being completely honest when I say…

Normally if I were to walk into a store and see these flavors on the shelf I might pass it up…but…I’m SO GLAD I was able to try this!!!! This is certainly something beautiful and rare and bold and unique! I really like it! It just goes to show you that you have to TRY NEW THINGS! If you don’t you might miss out on something wonderful!

Thanks again for your review! And I do agree.. trying new things opens up opportunities for the wonderful! I did debate on using just the rose petals. Always room for improvement :) .. but those whole roses are just so lovely to look at! ;) Cheers!

Wow, I so want this. Silver Needle AND green rooibos are – like – my top two favorite teas/tisanes.

That’s the first thing I see when I opened the tin – these large, well-formed rose buds that haven’t lost their colour or their scent – proving that they’re relatively fresh. They’re so big that at first the tea seems to be all roses – but that’s mostly because the other components are so much finer – green rooibos, curled little tea leaves, and small fruit bits. The tea does smell like roses, but it’s roses with something rich, fruity, and tropical-ish mixed in with it – a very appealing scent in my opinion, I could just sit here sniffing the tin. :D

The rose isn’t over-powering in the tea, though I think it’s very much the star of the show. I’ve never had plain green rooibos, so I’m not quite sure what it’s supposed to taste like as opposed to red rooibos, but I can tell you that I’m not getting any of the woody-earthy flavour that I usually associate with rooibos teas. What I can taste is that exotic, sweet flavour from the mango pieces and a tiny bit of a citrus zing. Despite the white silver needles and the jasmine pearl this tea is supposedly decaffeinated, though it doesn’t have that thin, watery taste characteristic of many decaf blends. Of course, apart from a few hints here and there of jasmine (mostly hidden by the rose) I’m not really tasting much actual tea at all! So it’s more like a herbal infusion, which is fine by me, I need a better selection of ‘nighttime’ teas in my cupboard.

It’s an interesting mix and maybe it’s the rose, but drinking it makes me a feel a bit girly – in a good way. ;) I don’t think I’ve ever some across a blend with a flavour combination like this, and it’s perhaps a little ‘busy’ but it’s great for someone like me who enjoys a bit of variety now and then.

This scent of the un-brewed tea is amazing. I almost want to eat it straight. Or pack my pillow full of it and smell it all night long as I sleep. It’s AMAZING. It’s full of sweetness and floral-ness and is just made of yum.

And while the flavor of the tea is good, it’s not as good as the smell. It’s got a very light, very floral flavor. I love roses and rosewater candy, and this tea reminds me a lot of rosewater candy. Another element I like is the green rooibos. This is the first time I’d had the chance to try green rooibos. And I think I like it a LOT. I have to admit, I’m not a fan of red rooibos. It tends to taste like dirt and sawdust to me. There are blends I like that contain it, but it’s mostly in their ability to cover the dirty-sawdustness of the rooibos flavor. But this tea has such a light flavor, trying to get it to cover any other flavors would be like trying to completely cover a Cadillac with a Kleenex. This green rooibos adds the sweetness and base notes without the sawdust flavor of the red. It really makes me want to try other green rooibos teas.

Overall, I like this tea; it has a lot of elements I very much appreciate. But I wanted more out of it, based on the aroma.

My first reaction to this tea was that it smells very sweet and a lot like potpouri! The scent of roses blends nicely with the fruity smell of mango and the sharp scent of jasmine.

After four minutes of steeping, the previously strong aroma really mellows out to a pleasing blend of primarily jasmine and mango scents. My first sip seemed to be entirely roses, followed by hints of tropical fruit and some jasmine. Quite pleasant, if not a bit much in the way of flowers. Taking a bigger swallow, a myriad of flowers and the mango taste flooded my mouth, though everything seemed to be tinged with the flavour of roses. There really is not much taste of rooibos in this tea, as it is overwhelmed by all the other tastes…and it really is okay. I see no problem with that (excepting that one of those tastes is sadly not rooibos).

To be quite honest, I cannot say this is something that would have caught my eye and held my attention if I had seen it in a tea shop. Perhaps it would have required a second glance at the ingredients and at the tea itself, as it is very attractive, and unique looking, both in the dry leaf and in the list of ingredients. It is tasty, the flavour is quite pleasant, and I believe it is a tea that some will very much enjoy. As for myself, I give it a 75/100 on my personal enjoyment scale.

Thank you for the feedback. Truly appreciated.