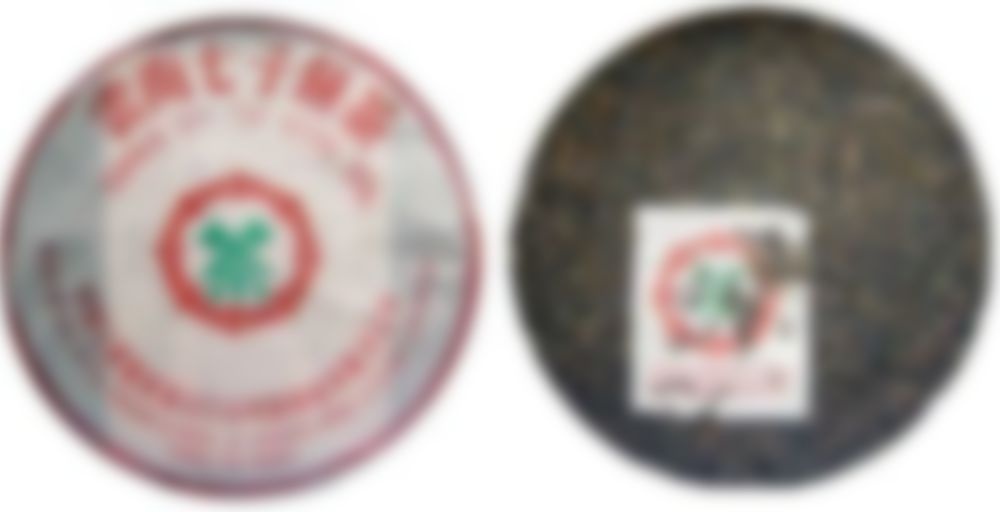 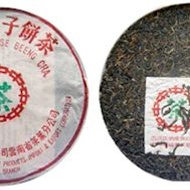 It affords a bright red-yellowish liquid with pure aroma and fine taste. And is characterised by a sweet after-taste all its own. Drink a cup of this and you will find it very refreshing and thirst quenching. It also aids in digestion and quickens your recovery from fatigue or intoxication.

Lang He Tea Factory of Menghai

I purchased this at the local Asian market. I passed by it in the huge tea aisle many times. My GF told me that it is no good. She is Chinese and does not drink tea. I figured with a price tag in the single digits I would take a chance. The tea comes in a nice package that is copper colored and the inside has this yellow silk-like fabric. The tea actually is quite good. I brewed this up basket style. The first steep for maybe a minute or so. It has a nice smooth flavor. No funkiness or off tastes. It is a very nice tea for under ten dollars. I saw it on Ebay for twenty. As I delve into cup #2 I realize I have made a very wise purchase. The tea is still smooth but now it has that carbonation in my mouth with under a minute of steepage. I will mail this tea for anyone who is interested. I have no idea how old it is. Hmm. I may have seen it in the store for maybe over 2 years or close to it. It is 357 grams and it was $8.99. There is also another one that I bought that is smaller that I will review later. As I sip further, the tea is numbing. It is very energizing without the jittery feelings. I made have to think in a few years it may be awesome. It is very good now….

I bought an 8oz can of loose cooked puerh at an International market for about $7. It comes in a nice looking red and black tin. The tea inside is less than spectacular. Very fishy and musty – all the things people fear about puerh. I learned to tame it with chocolate mint we grow because I refuse to not drink it.

This is a cake. I was pleasantly suprised. My first experience with Pu-erh was also at the same Asian market and it was in a tin made by Kim Fung Brand. It was very fishy and musty too. Now some however many years later it is much better. As a matter of fact I should do a tasting for Steepster.

Being a relative newby, some of my research on shu led me to believe it wouldn’t change much with aging. Glad to hear your experience says there is hope.

I’ll try anything once… lol

Amy it was quite nice….

Okay, so here we go! I deleted the last note of this one and will write my full one now!

At this point, I pulled some of the leaves apart as they were really sticking together. Next time I wouldn’t do that and just see what the taste is when left as is.

8th (9sec): Roasted hickory smell! Yummy! Reminded me of campfires but in a light way. It is earthy but very good. Tastes slightly woody with some of that roasted almost hickory taste! LOVING this steep! So delicious! I’m loving the hickory taste.

9 & 10: Same as above. Loved the last three steeps especially. Finished on 10 as I just felt done.

So, in conclusion, I am really enjoying this tea so far. I love using a gaiwan. I love using a tea pick. I love noticing changes in the tea as I steep it. I love how it actually does change as time goes on. I love how it brings me to a place where I stop and relax. I know to a lot of family and friends that don’t get it, that I probably seem crazy, but I love this tea journey that I seem to be on right now and how I’m really trying to find the ways I love tea the most.

Congrats and welcome to a Dark Side of Pu!

Here I am drinking this tea again, only this time I think I really am drinking CNNP Yunnan Chitsu Pingcha. I think. The other time I reviewed this tea, it was a shou; this time, it’s a white pu’er, or so I’m told. And based on some of the other reviews, I think I wasn’t drinking what I thought I was drinking. OR maybe I’m not now. Anyway, this is what you get when the only local tea shop in your area specializes in flavored teas served by folks dressed as pirates (read: coastal tourist trap) and their employees wouldn’t know pu from poo if a dog (or a 2dog) bite ‘em in the ass. Anyway, unlike the other block of doorstop I purchased the last time, this one isn’t bad, but it’s not something I’d go out of my way to purchase again. The flavor is very mild and floral. The leaves are like chopped spinach, not a trace of a whole leaf anywhere. But that might have been the pirate’s fault; he used his hook and no small amount of brute force to pry a piece of the cake off for me. No, not making that up, and not a pu’er pick in sight. Blimey!

At first, I was unsure of the quality due to the low price tag. Yet after having my first cup, I found it very enjoyable and this tea got me hooked on pu’er teas. After reusing the leaves for a second cup, its flavour only gets more smooth without tasting watered down. I do not have very large experience with tasting pu’er teas, yet I thoroughly enjoyed this one and now I drink it every morning. I do not know how aged it is, but judging by the affordable price tag (~$10), I’d say probably not very long. My verdict is that this is a very tasty and affordable tea for someone new to pu’er teas.

A relatively generic shou, I don’t know what year, or anything about it.

There was only right about 3.5g. I normally do my shou with right around 5g, so it was underleafed for my gaiwan. I don’t know if that’s why I felt this was weak, or if it really just didn’t have much flavor.

I only got a few infusions out of it. Then I gave up and tried for one long infusion. It didn’t improve.

I think it would be a good complete beginner shou. It’s not overly strong or too earthy, and it doesn’t have any off flavors. I’m still a beginner to pu’erh, but I think that I’ve advanced beyond this one.

Love this Pu Erh. It took me a while to get the preparation just wright (for my taste buds), but once I did this tea became one of my favorite pu erhs out there. Now, I must say that I prefer my pu erh strong, full of aroma and body. So if you are new to pu erh this might not be the best one to start with.
The first time I tried it I gave it a very quick rinse. The first steeping was quite weak and had a bit of a stale musky taste to it.
I sipped it for a bit … then went to check the cake for any signs of staleness, fungus or mold. I scraped it and I pealed it, and smelled it all over, it was healthy beautiful cake:) So I poured the tea out and made the next steeping, now this time the liquor was darker, thicker and richer. It lost most of the stale note and now was on the sweet side, earthy, rich, with mushroom notes but so much smoother. The more I steep this tea the smother it become and the more flavors and aromas it develops, from woody to sweet and spicy. It also lasts for ever, I’ve made up to 8 steepings and it was still going strong. So my backwards steeping process on this one is: Do a longer rinse, basically steep for up to over a minute and discard. Then make another longer steep at like 50sec, or when you see the liquor color rich amber. And after that I do short steepings at like 20-30sec. I also enjoy it with milk.

I first of all found trying this tea a thrill because of the authentic looking wrap. Initially I found sour plums winding out the bitter drink. Further I got the stronger steep, rather I acquired a sippable nectar that had kind of a keemun taste. Futherstill, I can imagine a myriad of chemicals used to produce such red of a drink after 10 steeps on the same 4 g/100

This tea for me has a long story.

Around 1969 I started tasting several types of tea. I met puer in 1975, the “little french” tuo Xiaguan Xuao Fa and liked it a lot. It become a standard buy, and when later (around 1980) my grocery store had another puer, this Chitsu Bing, it was expensive (probably 5$ or even a bit more ;-) but I decided to invest in it, and I was rewarded. When I finished the first, I bougt another, but unfortunately I had health problems, I was asked to reduce drastically smoke, coffee, tea and wine: I decided to preserve wine, and give up completely the rest. The tea went to a box, that was forgot when I moved.

Three years ago I had to give up wine, so I tried again tea, starting with puer; I discovered gonfu cha, and eventually found again the old box. Silver needle, tie guan yin, bi lo chun, bai hao, lapsang souchong were completely spoiled, and the loose leaves in the chitsu bing box were a bit state, but I could recover the core of the bing, about 60 g. of almost 40 years old tea perfectly preserved. Still incredibly good, and the best of my shu collection.

After rinsing the tea, the first 30 seconds infusion still has some stale notes, and little flavour and color, so I discarded it. From the second on, the leaves lost the stale bit, and started to develop giving a deep amber color and a sweet, mature taste starting with a slghtly pungent note, developing in a fruity taste and a very long aftertaste. The subsequent infusions, increasing the infusion time up to 90 seconds in the 7th infusion, confirm their sweet character with a pungent start.

Probably several more infusions woud be possible, but I could not waste a drop, and 70 cl of tea are enough for now; I will continue later.