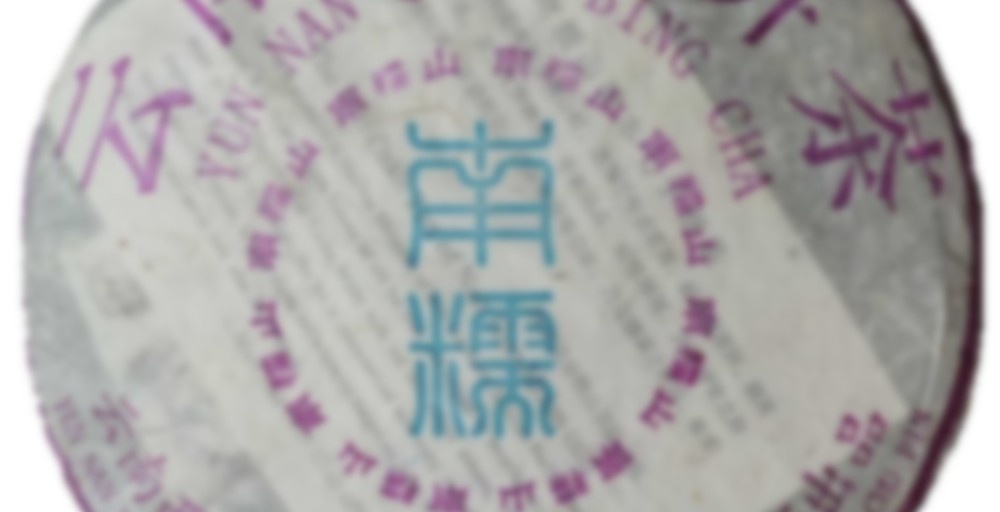 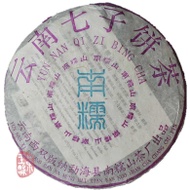 This is a classic and old style cake from Nannuoshan Tea Factory which was renamed as Menghai Banzhang Tea Factory from 2005. This cake made of 2005 pure sun-dried large leaf material, compression is medium.

I have had the cake at home for a few weeks already and have been coming back to it once in a while to get a more complex impression of its character. It is a nice cake with quite dark broken leaf which had been chopped on purpose (this is at least the official story from the vendor). Some cakes with large leaf are intentionally pressed with the leaf broken which is said to be the tradition, or in order to age well. In my personal humble opinion this tea would be more interesting if pressed more carefully and less traditionally.

The smell of dry leaf is sweet and fruity, and it is not hard to identify the typical Nannuo aroma, it is intense fruity and spicy. The cake is pressed medium light, it is easy to separate chunks of leaf. Due to its rather broken character, it is however quite difficult to get a regular sample and separate the leaves well. After unwrapping the cake there were quite many small particles and fragments of what used to be leaves, and since it was stored in dry environment it is also quite fragile. It seems to contain some amount of stems and huang pian too, yellowed leaves which are normally culled from Pu’er maocha before pressing, but may be worth brewing nonetheless .

The colour of the first infusion is very dark despite short steeping time, it even resembles some hongcha (red tea) in both taste and look. It is sweet on the top of the tongue and very citric afterwards. The citric and a bit minty flavour is so intense that it even paralyzes the tongue for a while. It seems to be the former astringency transformed through some years of aging already, as there are still gentle bitter-astringent tones present in the flavour.

Despite the lemonish trace, the flavour is still sweet and fruity, thirst quenching and refreshing. The leaf is very potent but due to the rather broken character of the leaf it is easy to overbrew it. Everything comes out of the leaf particles immediately in water, you can taste the whole complex character of the tea in the first few infusions. The later infusions are less intense, more mellow but the overall characteristics of the flavour and aroma develop quickly. The rest of the session you can enjoy less citric and more fruity and sweet tones and go like this for approximately ten or twelve infusions, depending on the amount of leaf and water.

Too see some photo documentation of this tea session and to read the full review see my blog entry: http://teadropping.blogspot.com/2011/11/2005-nannuoshan-menghai-banzhang.html

I think this was the tea Stephanie so generously sent me a sample of! It was really interesting at first. During the rinses, frothy bubbles, like from champagne, were in the liquor. It bothered me a bit because I’ve never seen that before, so I rinsed it a few more times and that went away, leaving a nice clear golden liquor. Phew! The taste was absolutely delicious…fruity sweet and smooth like butter. It actually had a buttery mouthfeel, which became more pronounced in later infusions. I again, lost count of the infusions. That happens to me a lot when I am enjoying a sheng!

This Nannuo Mountain tea is sun-dried and fairly potent yet easy to drink. There is an appealing bitterness and it provides a surprising spectrum of tastes – aged-worn leather, forest wood and tobacco but there is also a bit of fruity sweetness (maybe plum) present. The gold tea soup was a tad cloudy and there were a few stem pieces in the mixture of leaves I picked off from the moderately compressed cake. Nice huigan which builds throughout the session leaving an aftertaste which offered a pleasant cooling effect. I found this tea very easy to like. A good moderately aged tea at the very fair price of $39 for the 357g cake.