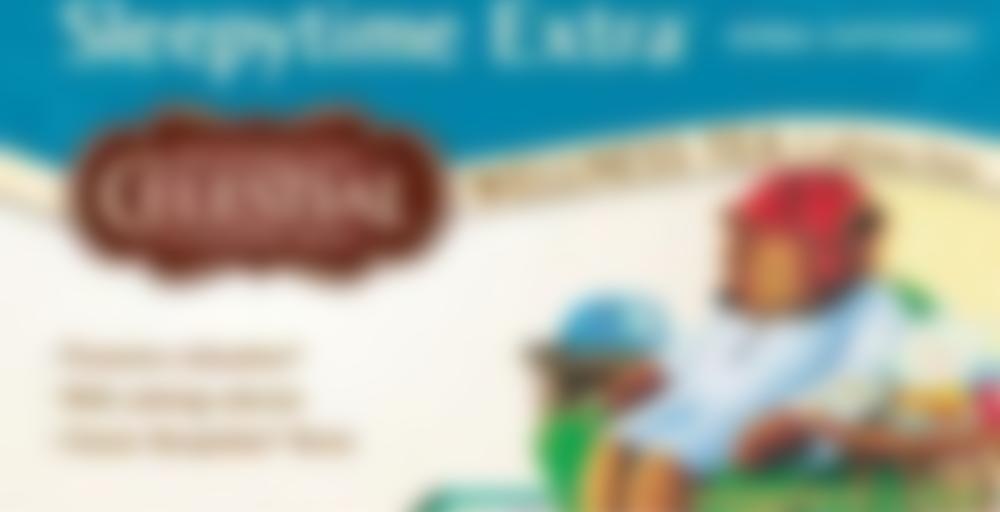 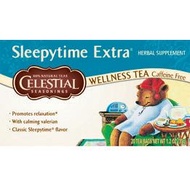 by Celestial Seasonings
82
You

Nothing promotes physical and mental well being like a good night’s sleep. So when you need something to help you unwind, enjoy a cup of Sleepytime Extra. This relaxing and delicious herbal tea starts with the time-honored blend of chamomile, spearmint and other soothing herbs found in our beloved Sleepytime® tea. We then add valerian, trusted as a sleep aid since the days of the Greeks and Romans because of its mild sedative properties. The result is a tea with the trusted calming effect and great taste of Sleepytime, plus just a little “extra” to gently lull you to sleep. †

†These statements have not been evaluated by the Food & Drug Administration. This product is not intended to diagnose, treat, cure or prevent any disease.

Ok, the guy that used to do Double Dare hosts a show on the Food Channel called Unwrapped. They did a segment on Celestial Seasonings. That inspired me to try this one. Some reviewed this as medicinal smelling. I did not get that. It smells mainly of spearmint. You may recall I hate spearmint tea. That said, it works in this one. The mint is not overdone and is followed by and surrounded by lemongrass. I can’t believe they go together but I like it. I added splenda and I cannot single out the appley chamomile or the lightly bitter valerian.

It did not knock me out. I could feel it. It did relax my brain so I feel asleep easily and awoke 8 hours later feeling refreshed. I like the taste of Two Leaves Better Rest more but Sleepytime Extra is half the price and available at Wally World. Looks like this may take up residence in my stash.

Double dare! I loved that show!

Yep, the king of Gak his own self.

Mark Somers (SP?) produces a ton of shows on Food Network and I believe Cooking Channels as well.

Mark Somers, I know the show. Also like Elton on “good eats”.

As to the tea … may have to give it a whirl, although I need a sleep-assist ingredient with the heft and effect of a well-wielded 2 × 4 on the back of my head. (I have a very relax-resistant brain.)

Marc S. name shows up a lot in production credits on FN. Since I have been forced into retirement I have been watching a lot of FN so I have just discovered Good Eats. It’s like Bill Nie made a cooking show with Pee Wee Herman on the writing staff. Well maybe not, anyway great show.

Gmathis – I know the feeling. It’s 6:00 AM and I am typing on the computer. Should have had a cup or three last night.

Yup, having this again. I’m starting to see a pattern developing. Peach Passion followed by Sleepytime Extra. Not a bad pattern, but I wish it was with a yummy loose leaf.

Since a nasty cold robbed me of my sense of smell and taste, I haven’t been able to review anything new lately. I’ve been mostly drinking familiar favorites and taking lots of naps. I’m feeling much better now, though! So now I can catch up on a few things. (Particularly Teavivre, but not this late at night.)

I’ve had Celestial Seasonings’s Sleepytime once or twice before, but I can’t really recall what it was like. The plain little pillow-shaped bag smells heavily of spearmint with a faint hint of lemongrass. I’m assuming the strong mint is there to cover up the not-so-nice taste of valerian. Oh valerian, how I love thee. Sleepy root of comfiness.

Strange… this tastes like it has chamomile in it, but it doesn’t. Maybe it’s just my imagination? Anyway, I’m not getting any bitterness or “medicinal” flavor. I added some sweetener, however, so I think that should be mentioned. It mostly just tastes like a plain spearmint tea to me. I guess there’s a little herbal weirdness in the tea’s scent, but I don’t taste it that much. Mmm, the spearmint lingers and cools the inside of my mouth.

As for the effects, which are really what I’m in this for, it definitely works for me. I know these blends don’t have an effect on everyone, but I feel very relaxed. My limbs feel heavy, and my spot on the couch feels particularly comfortable. I’m glad I have a whole box of this stuff…

Downing some of this before sleepy time tonight. I feel the tension melting away as I drink it. Could be placebo effect, but whatever… It is a nice soothing, pre-sleep tea. I just leave the bag in until I’m done. No harm in it.

i don’t know what it is with this tea, it never does anything for me, but i still keep drinking it!

i believe this tea has potential for some people! i believe for some the valerian (the “extra” in sleepy time extra) works and it’s enough to help lull them in to sleep. i am not one of those people >:( i have trouble falling asleep, staying asleep, and usually average about 2-5 hours a night. so yeah, basically insomniac – which is why i had such high hopes for this tea! it does, only on occasion, help calm my nerves if they’re feeling particularly restless. i do however drink this fairly frequently, and always have a box in my cupboard, if only as a last resort.

the taste…well, when i first started drinking it i found it absolutely offensive. the closest thing i can describe it to would be a foot. i REALLY did not like the taste or smell, but over time have gotten used to it and now the scent is synonymous with bedtime. if you’re looking for something to help you sleep, i think this would be the tea to try, but if you’re like me and the regular chamomile or valerian don’t seem to help, try something with kava or tulsi in them. i’ve had really positive experiences with both :D

Smells: spicy & very strongly of a medicine like aroma but not in a bad sense.
Tastes: lightly sweet, smooth & complete
Awesome tea to unwind with at the end of the day ♥

This is my go to tea at night. I enjoy the valerian root in it and the chamomile flavor is great! I usually steep two bags for a stronger effect so I can have a good nights rest….

While I never tried Sleepytime and Sleepytime Extra side-by-side the taste difference is minimal as it does not come off as any difference in the cup. But watch out as a single cup of Sleeptime Extra is much quicker acting than two cups of Sleeptime, so I would only recommend drinking this if you are ready to go to sleep very soon.

I’m about 3/4 of the way into my cup, and definitely feeling a lot more relaxed – not quite ready to doze off, but it’s definitely doing its job. The taste… eh. I’m not a fan of chamomile, but there are enough other ingredients with it to make it tolerable.