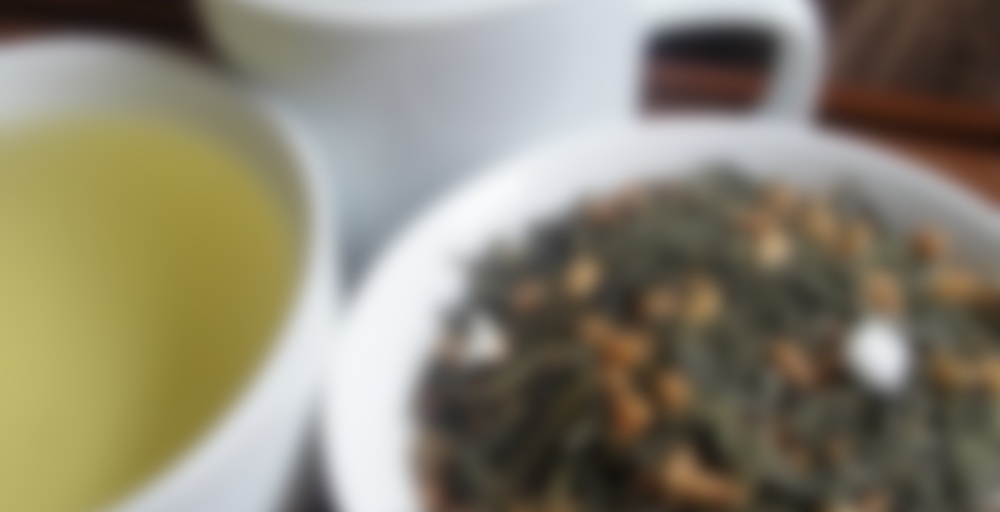 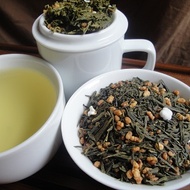 by Butiki Teas
86
You

Genmaicha is a Japanese green tea that contains toasted rice and popped corn. This flavorful tea has savory roasted notes and is low in caffeine.

Mmmm, delicious! A nice, light, sweet genmaicha. No astringency when following the recommended brewing parameters. I can only wonder what this might taste like with a touch of vanilla… probably absolutely fantastic :D The rice makes this lightly toasty while the tea base leaves a lovely “tea” flavour (yeah, I still don’t know how to describe that savoury flavour) lingering in your mouth, which makes this one of the better genmaichas I’ve tried (a couple I’ve had fall a bit flat or astringent on that front).

Can’t wait to receive my genmaicha from Verdant so I can compare the two! Base teas will be quite different, so I’m expecting them not to be comparable at all, but I’m curious as to which I will prefer.

Kittenna-I also recommend trying this tea with boiling water and steeping for 1 minute. The boiling water puffs up the rice and gives it a more toasty flavor. Both ways are tasty but lately I have been going for the hotter shorter steeps.

Interesting! I’m quite enjoying it as recommended, but out of curiousity I think I will have to try that too!

I tried boiling water for the re-steep (although I should have timed it, it probably got about 1-1.5 mins). The result is definitely stronger, and toeing the line of bitterness, which I’m not terribly fond of. I realize the second infusion wasn’t really the place to try this, but I was curious! I definitely liked the first results better, but perhaps with a first infusion, the result would be different. I’ll try to remember to do this next time!

Very tasty cup of Genmaicha that I had with dinner last night, so thank you again Kittenna for the sample. By the time I got to the last bit at the bottom of the mug, it was tasting pretty bitter, though.

It was very neat trying Butiki’s take on Genmaicha but I’m not too sad to see it depart my cupboard since I have so much Genmaicha as it is.

What is the best genmaicha you had so far?

The Japon, by far. But as far as straight/unflavoured Genmaicha goes probably the DAVIDsTEA version just because the green tea is especially drowned out. I like McQuarrie’s Tea & Coffee Merchant’s version too though, that one tastes a little more green but it never gets bitter.

Haha we definitely agree on our favorite genmaicha. Also, I am on the second season of bones and it was a super intense episode including Hodgins and Bones. Not as much work has been done this weekend because of this show and I am blaming you for that :P.

How are you feeling about Cam so far? AND IT’S A GREAT SHOW. I’m watching Season 9 right now – or trying to anyway, the episodes aren’t loading very well on the laptop. But I’ve been sporadically watching old episodes when he’s on it. I watched the first four in season 2 last night. Don’t want to spoil anything, but it’s nice watching old episodes with Zack.

So far I am pretty indifferent about Cam. Also, I may have accidentally found out the big reveal about Zach which makes me sad because I imagine it would have been much more fun to find out through the show.

I never understood the whole Zach thing. It was too left field for me.

Stacy sent me this lovely sample with my last order of tea and I thought I would try it today I oversteeped it because I was a moron and wasn’t paying attention. It tasted very much like plain popcorn :) maybe I should’ve added marshmallows….

I adore popcorn so dripping in butter that it stains your shirt. True story. Lots of ruined shirts over the years. ;)

Really enjoyed this one, though I think i’m just not overly a fan of genmaicha. It’s more of a have once in a while tea than an every day sort of tea. I really like the smoothness of stacy’s version though so i may have to order a small bag of this for those times when i DO want this type of tea.

I received a sample of this in my last Butiki order. I didn’t like the first couple of sips, but it grew on me as I started tasting flavors beyond the roastiness. It started to taste even a little bit creamy and smooth. I really liked it at that point! Only got glimpses of the base. What I tasted was a pleasant green tea flavor. No fishiness.

I had a really fantastic walk this morning. :) If it wasn’t apparent before, I can truly see that Spring is here now. Throughout the entire trail, all of the green leaves have grown in, and the little flowers of the salmon berry bushes are in bloom… Couple weeks ago on that same trail, it was all just bare twigs, and now there’s a heady foresty smell the whole way.

I saw a BEAVER! Now this probably seems strange for a Canadian to get so excited over a beaver thanks to all those weird stereotypes, but I’ve never seen one before. I’ve never known anyone who’s seen one before. Until today, they were as mythical to me as a unicorn. So I was very excited to see one swimming in the river for a little while. I even saw him do that tail whack thing on the water when I got too close. :)
I also saw rabbits, Canadian Geese, robins, and a LIZARD! (which I almost never see. I think it was a salamander, but I don’t know my lizards very well) The animals are never around when I go for a walk, so it was fun seeing SO many for once!

Anyway, onto the tea. This is my first Genmaicha. I was very excited to try it when I got it yesterday, but it was just too late in the evening to be having tea so I saved it for today. It was quite interesting! It was definitely toasty, and it tasted a lot like popcorn, ha. Before I knew Genmaicha existed, I thought the idea of ‘Popcorn Night green tea’ from DavidsTea seemed so bizarre, but turns out it’s actually fairly normal!

In addition to being quite savory, there was also a bit of a sweet note from the tea itself. While it was quite interesting and I’m glad I tried it, I’m not entirely sure if genmaicha is my thing. While I perfectly enjoyed the cup all the way through, I couldn’t really imagine myself drinking it often enough to buy it. More like if it’s being offered, I’ll take it, you know? I think I’d like genmaicha more with additional flavors. Like “______ Genmaicha” as opposed to just “Genmaicha.”

But still, overall it was nice. :) Savory, popcorny, a little sweet and not bitter at all.

Ah, another winner from Stacy. I really enjoyed this earlier today. Nice, robust roasted flavor. The base tea seems to be quite good, so the roasted notes really highlight it rather than the whole thing just tasting like rice (I’m looking at you, Say Tea). I’m still not back in the swing of writing long tasting notes, but I wanted to at least log this.

This is my first Genmaicha, and what a treat it is!
I love how it looks before it’s brewed. It’s got a great contrast between the white popcorn bits, the toasted rise, and the green tea leaves. I love it when a tea can make me happy just by looking at it!

Anyway, the smell of this brew is very toasty and slightly sweet. The toasted rice stands out the most, followed the green tea base and the popcorn. I love that I can smell each ingredient in the tea.

Taste-wise, this is quite nice. Toasty, slightly sweet, and best of all – no astringency! Yay! The green tea base provides a nice earthy tone to the tea, and the taste of the toasted rice and popcorn work very well with it. I love how the taste of the popcorn lingers after the sip! I’m also really digging the green tea base – I sometimes have a problem with green tea being either too grassy or getting bitter quickly. There’s none of that in this cuppa, and that’s the way I like it!
This is perfect on a cold day/night. Warms you right up!

Can’t wait to resteep this one and see how it holds up!

I’m doing my own Sipdown today since, despite my best intentions of sipping down yesterday, had a disastrous food and beverage day. First up is Butiki Tea’s Genmaicha, which I got as a sample from a recent order.

This is my first genmaicha, and I’m intrigued. I can smell the toastiness wafting off the mug as I type. It is rather pleasant, and totally unlike what I’ve experienced in a green tea before. The brew delivers on the promised toastiness—it is delicious! I really get the taste of the rice from the drink. The couple little pieces of popped corn I think I get more on the scent end. This is one of the few teas I’ve had where I can say “Yes! I taste what I’m supposed to taste!” This would be a great after dinner drink on one of those days when you’ve eaten just right, and don’t need any digestifs. A pre-prebedtime tea. This feels rather like comfort food for me. Its warm, savory, and delicious.

This is definitely going to go on my shopping list. There will be more in my future.

I wasn’t sure what to expect as this is my first genmaicha but I am very pleased! I could smell a delicious toasted smell as I was pouring my cup and it tastes fantastic as well. A delicious toasted, plain popcorn flavour that you can still taste the “tea flavour” of the green behind as well.