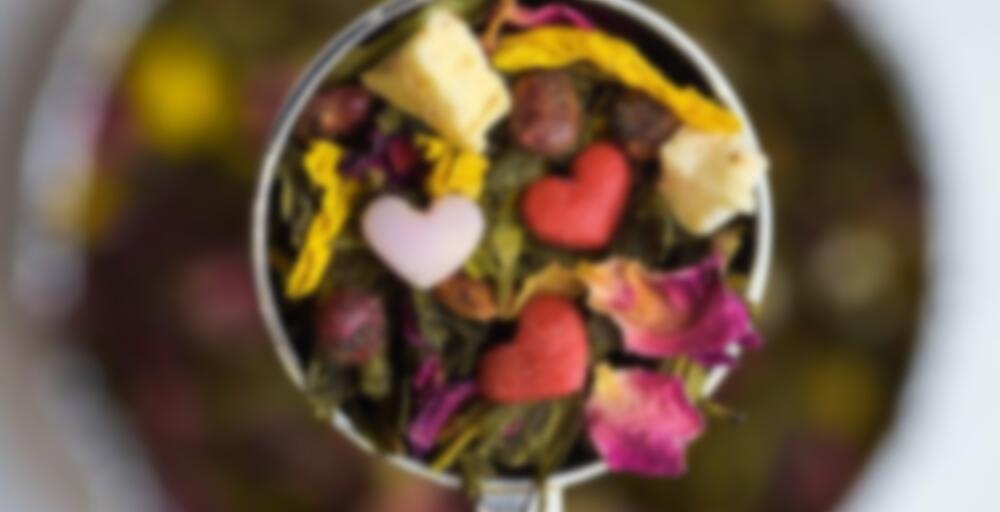 Add a pinch of fairy dust to your day and float into a peach & rose dream! Our very own green fairy might not make you tipsy but you’ll still be flying high after a cup of this beauty!

This blend is a returning Limited Edition, meaning it is only around for a short period of time. Tea Bags feature our exclusive ‘Love is Love’ tag design!

Day 14 of the Bird and Blend Advent Calendar – which I put off all the way until January to give a go because I just did not think this sounded like something I’d enjoy. A fan of peach juice I am not, nor of peach teas, so the blend of rose and peach sounded… iffy. Rose can be so hit or miss as well – I’ve had love dalliances with rose flavoured Turkish Delights, and I’ve also gone right off of them for years. I’ve had rose lemonade I loved at first sip – only to find that after several sips more it’s just too much like chewing on a pot pourri posey. I’m not even that big on green teas – yet here was this tea, ready to assail the senses in whatever way it was going to do.

But when I tried it, much to my surprise, I liked it! I’d even say I quite liked it! The peach was so subtle I wouldn’t have even guessed it was there. As I sipped, I forgot all about the peach and all I got was a slightly fruity kind of rose flavour. Couldn’t remember what fruit was supposed to be involved though- even as I sipped and sipped! (“Was it that peach one?” I asked myself. “No, couldn’t be – I’m not a fan of peach, but I could get behind whatever this is!”)

The rose was surprising to me, too. Maybe it depends on the tea scoop each individual gets, but my experience with this one bag was that the rose was present enough to be clearly identifiable as that most identifiable of floral flavours – yet not so overpowering as to make me feel like I was guzzling hand cream or cramming down Turkish Delights. It reminded me of Fentiman’s soda’s Rose Lemonade drink – but without the sweetness or the fizz. The tea felt feminine, and fresh (maybe even “flirty” in a playful-but-sophisticated kind of way – and even I’m cringing that I said that), and I could absolutely imagine hosting some kind of girl’s night where this was on the drinks menu… Which I say whilst being the kind of person who would never be hosting a girl’s night. This wasn’t my grandma’s rose tea, thank goodness, and the rose didn’t linger in my mouth. It was a light and airy tea whose flavours seemed to dissipate almost as soon as I’d swallowed each sip, which I think is maybe more blessing than curse when rose is involved. It fully fit the title of Fairy Dust – I’d say it was even more like Fairy Mist. A spell was cast with every sip, but so fleeting and ethereal that one wasn’t quite sure one saw a thing after a moment or two.

Against all odds, fully prepared not to like this (and the first whiff of the pouch upon opening it really reinforced that expectation – THAT got to the back of my throat, and the peach came through much more strongly in scent!), I thoroughly enjoyed this from start to finish. I wouldn’t go out of my way to buy it, and if I were gifted a pouch of it, it might only get pulled out once in a blue moon… But I can totally see myself brewing up a cup in a kind of “I deserve nice things” moment while I put on some kind of shamelessly indulgent crap-TV to binge. Because nice things don’t actually have to be THAT nice. It’s probably the feeling people get when they pop open a bottle of cheap champagne or something. I wouldn’t know – my equivalent, apparently, is Fentiman’s Rose Lemonade. Which, I gotta say, is pretty good too. For something hotter and less sweet though, this is a great match.

Not much peach here, just lots of soapy, perfumey rose. Not a fan!

This was a polarizing tea in my advent group today and, to be honest, I expected to be on the side of the fence that didn’t enjoy the tea. It’s a green tea, and a sencha in particular, which I usually don’t enjoy – but more than that I’ve had some very weird/unpleasant experiences with Bird and Blend’s interpretation of rose…

However, shockingly, I think this is maybe my favourite from the B&B advent so far!? It was just so surprisingly sweet and juicy peach with a lovely effervescent quality and a bit of that “Fuzzy Peaches” tangy candy vibe too. I felt like the green tea was pretty masked but also that the lightness of it really allowed for that peach to feel so fresh and bubbly/bright. The rose was also on its best behaviour – delicate and a little present in the undertones (which I appreciate, I do usually enjoy rose) but not the “Grandma’s perfume” level I’ve gotten in some other teas.

I actually do own this tea – I just haven’t tried it yet. So, I’m thankful for the little push to experience it and now I’m eagerly awaiting my next cup to see if the good vibes and yummy taste continue.

We loved this one too! Shockingly! I have always hated rose, until today!

Maybe they have improved the blend for the Advents? Or maybe it ratio of all ingredients were “just right”. I wasn’t a fan.

Maybe! I saw that the reviews were just abysmal, but I’m glad it tasted alright yesterday. It’s always nice to be pleasantly surprised.

Hmm, rose and peach? Neither are flavours I enjoy in tea. I would go so far as to say I cannot stand rose, however, new teas are always exciting!

For reference, we picked out the wee candy hearts. The steeped scent is actually growing on me as the tea cools enough to try it. Maybe a bit tropical?

Okay, this is bizarre, but I’m actually loving this! The rose has a sweetness with it that is so delicious. The peach lingers at the end of the sip, almost like a not fully ripe peach.

As it cools it gets more rose floral than rose sweet and that’s not my favourite, but I’m still enjoying this!

This is actually an enjoyable green tea and I very rarely, if ever keep green teas around. This one I may actually consider!

(Thanks to Martin for sending!) Brewed for 3 minutes in a makeshift gaiwan while attempting to watch the presidential debate. Flavors and smells may be affected by how disoriented I am by Trump’s blabbering, it was nice to have a hot cup of tea to stabilize myself. I notice a strong peach smell and sour peach taste. The rose smell blends strangely with the peach. Rose always tastes a little soap-y to me so it might be different for other people. A very different-tasting tea overall, not my favorite, but might try it with milk and sugar and see how it tastes later :)

Apparently none of us are happy with this blend. That happens and I am somehow glad I am not only one :D

The aroma of loose is not amazing. It is strong perfume like, rose, with deep inhale some butter and exotic fruits.
Brewed quite long and heavy (4 grams – 5 minutes); but brew was quite light, yellow-green. Aroma of brew is not very present, reminds me only hay and rose. When sipped I note only some weird notes of sour, I haven’t noticed any peach, rose was quite weak and base was not there at all.

Overall rather letdown. Expected more fruitiness and as I had black tea with rose, I miss the body of tea. It was somehow generic with some weird flavour.

This arrived today in my Bird and Blend subscription box, but apparently it doesn’t launch until mid-March separately. This is the only non-rooibos blend in the box this month, and unfortunately I don’t care much for it. The rose is pretty perfumey, and I’m not really getting any peach notes, but rather a generic sourness. The tartness fights the rose, and the flavor is really odd.

I have just opened it, as it is green tea. No, the aroma is soo off. I don’t want to drink it and I will pick something else instead.