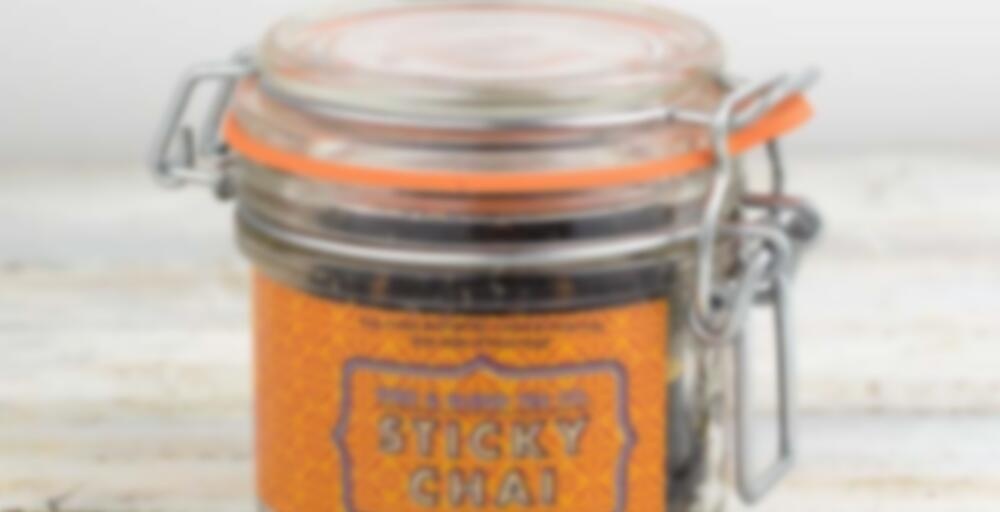 Sticky Chai is the most authentic, natural chai mix this side of Mumbai!

We’ve been busy bees working on this one – the original recipe, made with Brighton Raw Honey is back! We just couldn’t replace that creamy sweetness which our locally sourced honey provides!

What’s so special about Sticky Chai?

The best chai always comes from using the freshest ingredients but with the busy lives we lead we often don’t have time to grind our own spices and if we store them for later they start losing their goodness and flavour!

When making our Sticky Chai tea we do all the hard work for you, blending and grinding spices fresh and even mixing in fresh ginger root for the most authentic chai experience. We then stir in the honey or maple to help preserve the Sticky Chai which captures all the flavour and goodness of the spice mix and locks it in ready for you to brew at a later day!

I felt like a stovetop chai, so I pulled this one out to make. I started with the recommended two heaping teaspoons per 8 ounces of milk. Not sure whether they mean measuring teaspoons or regular kitchen spoons? I assumed measuring teaspoons as that’s how tea is generally measured. I heated it over medium heat and simmered it a bit, then decided the color was too light and added another two teaspoons of tea.

So… This came out weirdly savory with no sweetness at all? I don’t know if I didn’t use enough tea, so that’s why I’m not tasting the honey? It almost reminds me of some kind of pumpkin soup but without the sweetness. I ended up stirring in some additional honey to get some sweetness, which helped, but it was still a rather bizarre cup of chai. Spice-wise, I was getting a lot of fennel, maybe that’s why it went to such a savory place?

Monday 3/29/21 — Bird and Blend Sticky Chai. I enjoy this tea plain, latte, stovetop but it lost in my March Tea Sipdown Madness a few weeks ago(?) Anyway, had 2 hot/plain lattes today to finish up this package which was best by a little over 2 years ago. I’d keep this in my cupboard / purchase this in the future if it’s around in a few years when my tea stash is under control / if I ever wanted a nice sticky chai. (this is not a full sip down, I definitely have more of this in my stash)

I rarely do a review for the same tea again (my original post on this is here: https://steepster.com/mastressalita/posts/396293 ) but after attempting this tea (stovetop style) a few times over the weekend I think I’ve finally perfected how I like it. The first time I made it, I had trouble getting it quite right, too. Since past and present Sara have the memory of a goldfish, it stands to reason future Sara will too, so this is for you, future Sara!

1) Use plain oat milk, not vanilla. Otherwise it’s way too sweet.
2) For a 16 oz. cup: use 2 cups oat milk and 3 heaping regular ol’ kitchen teaspoon globby scoops tea for a more “mild” profile; for slightly more kick, use 1 cup oat milk/1 cup water and 4 heaping teaspoon scoops of tea mix.
3) While simmering the tea, DO NOT BLINK. BLINK AND YOU DIE. (Or at least your chai will boil over that quickly… but I’m still sure Weeping Angels are involved somehow…)
4) Don’t even think about trying to use your gravity well infuser as a strainer. Just don’t do it. Goopy residue will coat the fine mesh and you’ll never get the tea out and have to use a standard strainer anyway.

It’s a nice chai, albeit a bit finicky because of the goopy honeyed leaf. Having tried a sticky chai now, I don’t think I’d ever get one again, since it is much easier to measure the leaf consistently and get more balanced scoops with dry leaf, and I can always add my own honey to the stove mixture to taste anyway. It has been a bit interesting that every cup I make seems to be an entirely different dominant spice flavor, likely due to just what happened to be stuck in my clumpy scoops that time; yesterday, I had an extremely fennel/anise cup that tasted like melted black licorice (I love black licorice, so I was fine with that!) while today, I’m not getting that at all, instead it tastes very cinnamon-sweet.

Chaiwala makes a sticky chai that is awesome, albeit not too sticky which makes measuring it easier. It’s my favorite chai.

Also, I laughed really hard at this review so I am super glad you shared it. Thank you.

Ah. This one is frustratingly sticky, which adds to my frustration of trying to get a good and consistent brew. I guess I just figured all sticky chai would have the same issues! It doesn’t taste bad, just a lot more of a pain to scoop/measure/get a consistent flavor compared to dry leaf chais I’ve tried. I know I tried sticky chais by Prana Chai at a tea festival and liked the taste of those, too (especially their mint one).

This is the first sticky chai I’ve ever had (I have chaiwala from the Toronto Tea Festival I need to try and a few of B&B flavored sticky chai that I need to get around to). Thank you for sharing this review I enjoyed it (like VariaTEA) as well :)

Your review also made me laugh. :)

For simmering milk, enameled cast iron was a game changer. It heats milk in a way that allows you to blink and not die, at least with the continuous heating of a gas range. Nor will the milk scald on the bottom of the pot.

Tell me more about this “enameled cast iron”? What does this mean? :)

Tiffany: it’s cast iron cookware coated in enamel paint. Here’s a good thread about different types of cookware: https://www.chowhound.com/post/enameled-cast-iron-stainless-steel-ceramic-clay-782038 If my housemate hadn’t already had an enameled cast iron dutch oven for slow-cooking acidic soups and stews, I never would have invested the money in one. They can be very expensive. Costco out here in California has a 2-pack for $69 right now.

I’ve had this chai a couple of times now and it has been a disappointment every time. I have tried steeping it, boiling it in nut milk and now doubling the amount of tea to try to pull some flavor out. Chai is usually spicy and warming, filled with delightful flavors with a base of tea to carry them. This doesn’t have that. At all. I can smell a little bit of the spices as I sip, but get next to nothing on the palate. The idea of a tea kept wet with a sweetener is interesting, but the company has WAY oversold this tea as “the best chai this side of Mumbai”, which raises expectations to something this tea can not deliver.

I always wanted to try this one. But saying it’s the best chai does set the bar a little high.

You really aren’t missing much. It sounds way better than it is. Should have been more like “the okayest chai this side of Mumbai”.

This is the agave version (B&B also do honey and maple varieties). I made this one in a pan on the hob, as per the recommendation, using 2 tsp of leaf, heated in milk until just about boiling. It strikes me as sweet, as chai goes, and what I like about it is that some of the more unusual flavours stand out more than the more usual suspects. For example, I can taste the anise most prominently, followed by corriander and fennel. For this reason, it doesn’t strike me as a particularly spicy chai – it’s more gentle/fragrant, but I’m actually enjoying that since I feel like I’m tasting things I wouldn’t usually notice much in other chai blends. The usual things are there – ginger, cinnamon, clove, cardamon, pepper – but they’re pretty muted and remain mostly in the background.

The base tea is assam, and that’s deliciously malty (as you might expect). It works well with the sweeter overall profile, and with the agave particularly. While the blend as a whole tastes sweet, it doesn’t come across as sweetened or artificial. It strikes a nice balance.

I think, in future, I’d probably experiment with a bit more leaf, or perhaps 50:50 milk and water because I’d like the overall flavour to be a little stronger. Having said that, I really enjoyed the flavour I got here, so that’s not a criticism. I’d just like to taste more of it! I’ll return to this one with interest, particularly as the colder weather returns.

On an unrelated note, today was my first day in my new job, and I think it’s going to be okay. Obviously it’s all a bit weird and confusing at the moment, but I think it has the potential to be really nice. I have a cold at the moment, though, that I helpfully developed over the weekend, so I’m feeling pretty tired and just blah in general. For that reason, I’m going to pause my challenge for a few days while I recover, and while I get to grips with my new working arrangements. I’ll be back in a few days, though!