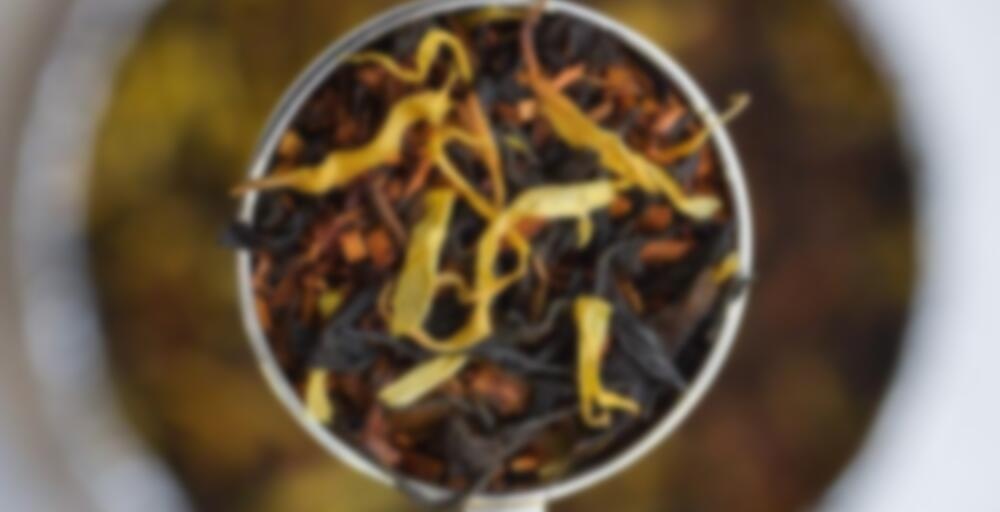 You’ve been asking for a while now and we’ve finally done it: Bacon flavoured tea! Not just bacon though – bacon and maple syrup pancake tea! Oh boy! We’ve paired sweet vanilla rooibos with smoked lapsang and a hint of spicy chipotle to create a menage of flavours that will always hit the spot!

Well, I deserved a treat today. I have passed that awful Mathematics exam. What a close call! But nobody will ask me again. Now, let’s pass another Mathematics. We have two courses of them. Ah dang.

But to this tea. As pancakes are quite rare as breakfast here where I live… moreover maple bacon ones; I truly had no idea what to expect. But I had maple bacon before and I remember liking it very much!

First of all, this tea smells divine. Quite on sweet side — mostly the maple syrup and some salty-smokey note.

Brewed, with two teaspoons / 300 ml; it smells okay first, but after approx. 3 minutes of steep it was pretty nice. Quite rooibos forward, but there are some smokey notes again. But gentle. Certainly it’s not too smoky blend.

After steeping and during the sips I truly noticed the pancake flavour with sweet-meaty bacon flavours. A bit sweeter for me, but afterall, it’s maple bacon. I am used to enjoy salty bacon. I think it is pretty much a good example of promised tastes. I can understand it is not a cup for everyone, but I can imagine finishing it easily.

Sounds like a great tea to celebrate your success. : )

Congrats on your exam! Such a great feeling to have that behind you!

This sounds like such an interesting flavour. I’ve never had meat flavoured tea before, lol! :) Loved your review!!

Thank you everyone!
Silent Kettle: Certainly an interesting blend; shame it’s gone now. Maybe I could send you a little bit to try :) Let me know if something else in my cupboard sparkled your interest.

Not Recommended
Cameron B.
2303 tasting notes

From the February subscription box!

Yeah, this is just not for me. I don’t dislike smoky teas, and I don’t dislike dessert teas, but this combination of smoke and buttery-caramel-something is just weird. I had the same issue with other similar teas, like B&B’s Hot Buttered Rum and August Uncommon’s Low Country.

To me, the added flavors just come off really artificial, even though I probably wouldn’t have thought so on an unsmoked black base.

Oh well, into the rehoming box it goes! And more for everyone else! :P

Aw that’s too bad! I actually got a subscription box for just the month of February specifically to try this tea! I haven’t opened it yet, but I don’t really like smoky teas, so we’ll see!

It’s fairly light on the smoke!

I’ve had this one a while, though as I’ve been trying to drink up teas that are even older, it hasn’t been out of my cupboard until today. I love the idea of this one – I’ve not tried many bacon teas, but those I have had have been positive experiences. It something that sounds like it shouldn’t work, but somehow does. It’s an idea that’s super appealing to me as a breakfast tea, so that’s how I’m drinking it this morning. I used 1 tsp of leaf for my cup, and gave it 3 minutes in boiling water. No additions.

The initial sip is pancakes smothered in maple syrup. The maple is up first – sweet, rich – and then there’s a thick butteriness that’s very reminiscent of pancake batter. It’s like taking a bit of freshly-made pancakes that you’ve just added a lot of syrup to. Maybe too much syrup for some, but I think it’s pretty perfect.

The bacon is more muted than I expected, and seems more like a flavour that evolves as the result of the ingredients, rather than an additional “thing in itself”. It’s not like 52Teas bacon, for example, or like bacon teas that actually have those bacon crispies in them. I think, here, it’s the combination of the smoky lapsang souchong, the earthy pu’erh, and maybe even just suggestion brought to mind by the strong maple/pancake elements. It’s subtle, in any case.

There’s a hint of cinnamon in the aftertaste, and a touch of smoked chili, which add a little something extra to the overall effect. On the whole, this strikes me as a tea that’s been well blended and put together with care. The flavours work well together, and the overall effect lives up to the name. I’m really pleased with this one!

Now this one sounds right up my alley. Nice review. Thanks, Scheherazade!

After putting off trying it for nearly a year, I decided it was finally time to brew up this tea.

I’ve been sipping away at a pot of it for over an hour now, just contemplating the flavour. Honestly, I haven’t really been able to settle on whether or not I like it. I think the problem is that I can’t stand the finish, which is really intensely spicy from the chili in the blend. Like, when I swallow the liquor my throat burns and it’s SUPER unpleasant. However, despite hating that element of the tea… the rest is really good.

For starters, when you discard the chili spices, it actually does taste exactly like pancakes smothered in maple syrup with a side of bacon. The beginning of the sip is definitely where the pancake element of the tea shines through the most: there’s a rich maple sweetness followed by a very thick, buttery quality that to me captures the idea of pancakes very well. The little dash of cinnamon thrown in with that buttery note blends in with the pancake flavour near seamlessly, and gives it more of a ‘made with love and care’ sort of vibe. The evolution of those two flavours, one after the other, works perfectly too because I feel like I’m realistically taking a bite and getting the sweetness of the syrup I’ve added just before the pancake that makes up the bulk of the bite.

The bacon isn’t super direct, like 52Tea’s Bacon teas, but more a “sum of the parts” type of flavour. In this case, the combination of smoky notes from the Lapsang, a touch of the already experienced maple, and the earthy/brothy flavour of the Pu’erh come together to create the idea of bacon in a convincing way.

But that damn chili though… It truly ruins what would otherwise be a good tea.

And so I’m finishing this one off a little sad, because I got the flavour I’d hoped for but at the same time it wasn’t a relaxing pot of tea either. So, I’m not really satisfied overall which is frustrating ’cause I feel that without that one ingredient I really could have been.

To my relief Maple Bacon Pancakes was so good! Nothing too harsh and certainly sweet, bordering on syrupy. However, the after taste is where the kick lies. A fiery tingle left on the tongue. Nothing too extreme, depending on how much chilli you have in your steeped leaves! My first brew was an almost pleasant peppery taste, but my next batch contained a fire that I couldn’t quite handle. Despite my focus on the finish, rooibos takes prominence in the flavour, combing perfectly with the vanilla and cinnamon to create another curious sweet blend with a gentle smokey backing note, provided by Lapsang Souchong.