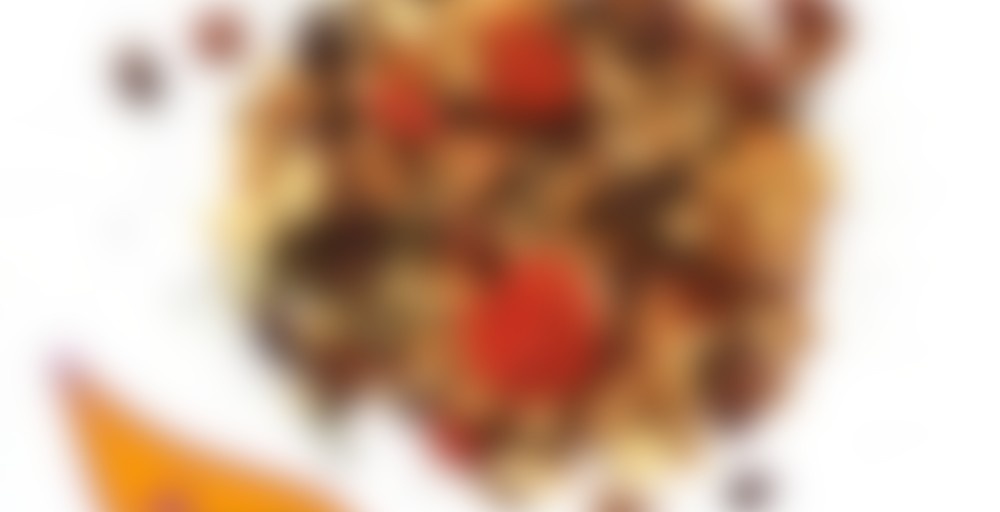 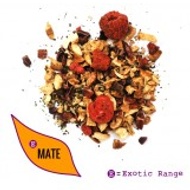 Chicory, a caffeine-free coffee substitute, has a roasted, almost bitter tone and blends perfectly with fruity raspberries, cocao and coconut in this tea blend. Helps promote healthy digestion and totally guilt free, we love it with milk as a healthy coffee alternative

Bluebird’s Perfect Tea Spoon and in-cup infuser Basket (fits all cups and pots) are the ideal tea tools to make your perfect cup of tea.

I’ll admit it. I’ve been scared of this one. It’s only getting a chance today because I have no milk and somewhat limited options at work, otherwise it would have stayed firmly consigned to my “too terrified to drink” pile. I’m not nervous, just cautious.

The dry leaf is an interesting prospect. It’s mostly beige chunks, that I assume are chicory. There are also three freeze-dried raspberries (in a 20g sample), plus a fair helping of cacao nibs. At the bottom of the bag are some very finely shredded brown and green leaves, which I guess has got to be the yerba mate. It’s not how yerba usually looks, though…and if some of it’s green then it’s not all roasted. Unless the green is something else? The ingredients list is out of ideas. There’s no coconut to speak of.

The scent, dry, is bitter and very reminiscent of coffee. I get that. Chicory is a coffee replacement/alternative, so fair enough. I’ve had a few chicory blends of late, although they’re mostly dressed up as root beer/butterbeer style blends. I’m not sure what this one is supposed to be imitating. Raspberry and coconut make me think of cake, and yet something tells me I’m not going to get cake from this one.

It doesn’t smell quite as coffee-like once brewed. Instead, it takes on a nuttiness that reminds me of cashew or macadamia. There’s also a fair hint of chocolate, so that’s reassuring. I was fairly conservative with my brew time – a scant 3 minutes. The scent made me wary, and I don’t like my yerba-based blends over-brewed in any case.

To taste, it’s not quite as bad as I was expecting. It has an edge of bitterness, but the main flavour is dark chocolate and that helps to smooth things out. There’s a touch of coffee, although it’s not particularly strong. If you made a cup of instant with too few granules and too much water, you’d get something like this I imagine (minus the chocolate, sadly for you.) Overall? Chicory and chocolate. Which is fair enough, given that this one’s called Chicory…Choc. I have no idea where the raspberry and coconut went, though. They’re MIA. The yerba isn’t making much of a contribution either, except maybe to round out the earthy roastiness. Let’s say it’s doing that. For argument’s sake, it might be.

I’m not really enjoying this one. It’s not that it’s unpalatable, just that I don’t like it very much. I don’t really understand it, as a blend. If I wanted coffee, I’d drink coffee, and it wouldn’t be anything like as thin and watery as this tastes. It’s not like there’s a shortage of decent chocolate teas, either, although I’m grateful that the cacao nibs bring some redemption to this blend. It needs it.

I would have liked to have been able to taste the raspberry and coconut, because that’s what sold this blend to me. I’ve also come to the conclusion that chicory should only be used in root beer tea, and not for any other purpose. It’s the natural order of things.

Did I like drinking this tea? Not really. Did I learn something from it? Yes.

Gradually trying teas from the order. This sounded like an interesting blend but I’ve never had chicory… it’s compared to coffee. This is a tea full of heavy pieces so 10 grams only seems to be about three teaspoons. The blend is mostly big tan pieces.. I think that is the chicory? I don’t see much of anything else but there are the tiniest green specks that don’t seem to be listed in the ingredients… it doesn’t look like any yerba mate I’ve ever seen, roasted or green. Otherwise the blend should have coconut, raspberries and cocoa nibs. The fragrance of the tea seems like creamed corn but whoa this one just seems bitter. Bitter. Bitter. I don’t like it too much. There seems to be an intriguing smoothness underneath all that bitter somehow (that creamed corn scent) but there doesn’t seem to be much else (maybe that is coconut but there is no cocoa or raspberry even hinted at). Chicory doesn’t seem to be for me but maybe I didn’t get a blended enough sample from Bluebird.
Steep #1 // 1 tsp // few min after boiling // 3-4 min steep
Steep #2 // just boiled // 4 min

Yeah, the huge chunks are likely the chicory. Not a fan of it either. Too weird for my palate.

Another tea from the Bluebird order! This one was definitely a total wildcard on my part, as I have such little experience with maté and absolutely none with chicory. But for some reason I kept going back to it, so I figured I might as well get some and try it out. I know chicory is often used as a sort of substitute for coffee, so I figured it would mostly likely be roasted and possibly somewhat bitter. I will say, my 25 grams of this tea has one tiny piece of freeze-dried raspberry in it. So, either the packet of this tea didn’t have ample raspberries or someone else got all of them when it was divided up. I’m hoping this doesn’t have a ton of impact on the flavor… Another thing, the ingredients lists only roasted maté, but mine appears to be a mix of both green and roasted (unless the crumbled green leaf is something else). Dry, it smells very much like sniffing a giant roasted nut of some kind, possibly cashew.

I admit it, I actually made this twice. The first time I steeped it for 5 minutes and it was super bitter. I figured I should give it another chance before writing any kind of note (although the directions did say 4+ minutes). This time I stuck to 4 minutes, and thankfully it’s not quite as bitter (although it still has bitterness to it). I’m assuming the bitter quality is just a part of the chicory and I’m not still brewing it incorrectly…

Overall, the taste is also similar to roasted nuts, and definitely a creamy and fleshy nut like a cashew or macadamia. There is a fair amount of bitter (possibly from both the cacao and the chicory) but it doesn’t overpower too badly. I must say, I don’t really taste chocolate at all here. I do, however, taste a strong roasted flavor from both the maté and the chicory, and it’s very nice and slightly reminiscent of coffee. I definitely don’t taste any raspberry at all, or anything close to a fruit taste.

This is definitely an odd one, and I may experiment with even shorter steep times to bring the bitter quality down even further. It would definitely take milk well, though I don’t generally add milk to my teas.

Edit: I forgot to mention that there’s a certain umami quality to this tea that makes it seem very broth-like. It almost reminds me of miso soup! (in a good way :D)

careful, mate is very energizing. its better as breakfast option. maybe you are not sensitive ;)

I guess not… I had another maté earlier today as well and didn’t really notice any difference.

…it sounds strange…. which is always intriguing…