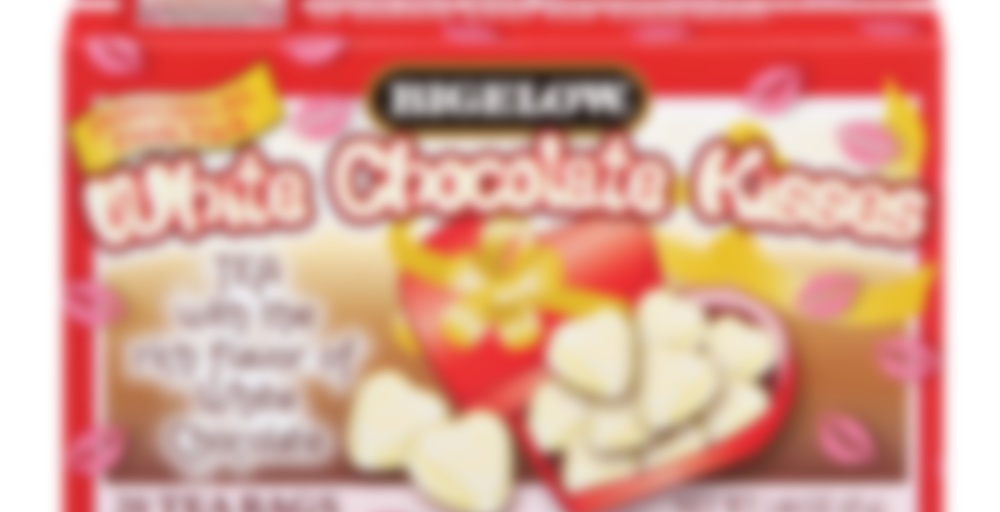 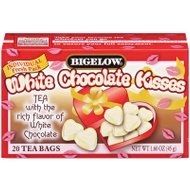 Here’s a year round valentine for everyone! In a moment of divine inspiration, Bigelow® White Chocolate Kisses blends the heavenly taste of rich, decadent chocolate and robust black tea. For a zero-calorie treat, drink it black. Add a little milk and sweetener and it’s truly a dream come true.

One of my friends gave me this to try AGES ago, and I’m on a chocolate kick, so I decided to give it a try. I should note that on my bag’s packet, it’s called White Chocolate Obsession, but it has the exact same art and it’s still by Bigelow. I dunno what’s up with that. Maybe it’s an earlier/later version.

Good lord, this smells chocolatey! Though what kind of chocolate, I’m not sure. Too strong and sweet to be a Tootsie Roll, but it kinda reminds me of that. You know, like chocolate candy that doesn’t actually involve any real cocoa. Or chocolate lip balm. Or the brown chocolate-scented magic marker from my childhood. This does not bode well, but I’m brave.

I lightly sweetened it and let it cool, thinking about adding a splash of milk even before having a taste. The flavor is less strong than I expected, and slightly metallic under the odd chocolate taste that lingers upon exhaling. It does actually taste a bit like white chocolate, but I’m a dark chocolate kind of girl. The black tea base is very mild and smooth, but it adds a pleasant maltiness. It tastes like it’s mostly there to support and add depth to the chocolate.

After a few sips, I went for the 1% milk. It holds up against my generous amount of milk well, still very flavorful, but still not good. Creamier, but just sort of sad, like it wishes it was a white mocha or hot cocoa.

Sounds nice! Haven’t seen it locally, but now that I know which local grocery stocks Bigelow seasonal Christmas teas, I’ll have to check for this one in the Valentine aisle. Should be stocked about Wednesday ;)

Wow! This smells so much like the high calorie white chocolate mocha that I love so dearly. I haven’t had one in ages and this tea really brought me back to that flavor. It isn’t as creamy in texture, but I bet if I added a splash of cream the texture would be about right. This tea is intoxicating. Such the perfect tea for me. Thank you JoeCool for sending me a few bags!

hmmm I wonder if this is out now for Valentine’s? It sounds good….going to check the grocery store!

Ok just checked the website and it is on there, so hopefully my local store will have some!

The way this tea was described made me think it would be something absolutely delicious! This tea isn’t bad, it’s just a bit strange to me. I taste black tea mixed with an artificial flavor that wants to be chocolate, but just isn’t. The smell is pleasant, though.. a soft chocolate-like smell. I’m glad I was able to try this before I bought a whole box. Thank you to JoeCool!

A friend of mine recieved a box of this tea as a Valentine’s Day gift, and she gave me a couple of bags to try it. It’s very nice. not really strong in the flavor department, but still tasty. I added milk and sugar, and it turned out nice and creamy. I’ll have to find myself a box.

Reading reviews about this tea convinced me to order a box. Chocolate without the calories? Sign me up! Of course I didn’t expect the full experience of chocolate, but a little flavor would be a nice effect. Upon receiving my box I noted the strong scent. It did smell chocolatey; almost like a tootsie roll… but the taste! It was exactly like the chemically-sweetened taste you find in diet chocolate bars. I tried to finish the cup, but was unable. Even with the addition of (almond) milk and sugar it was unpleasant. I’m currently trying to force the box on a friend.