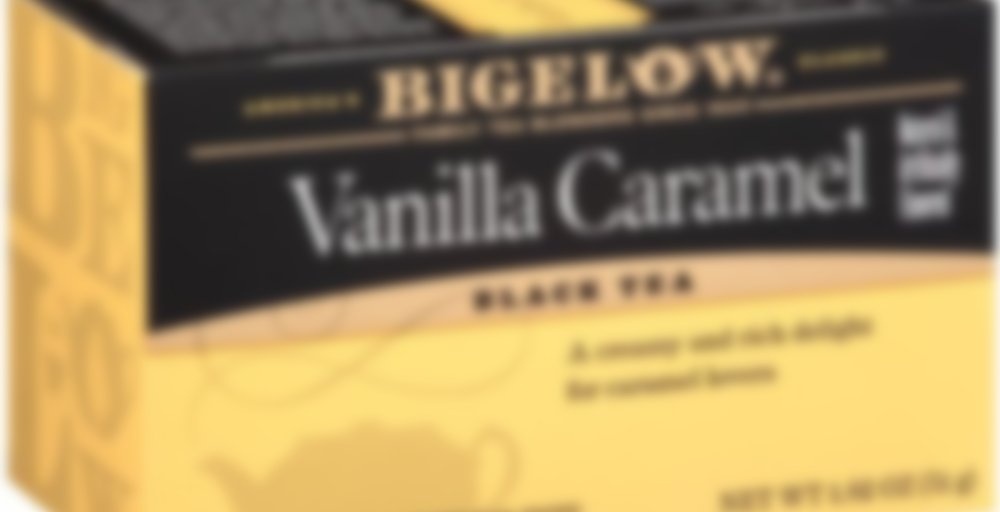 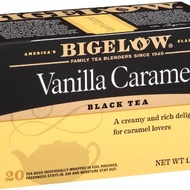 How can something so incredibly delicious have no calories and be good for you too? It’s true! Bigelow Vanilla Caramel Tea has the rich, creamy flavor of caramel yet contains no calories. And because this delicious blend contains black tea, it has the added benefit of healthy antioxidants. When you feel you need a moment for yourself, relax with its wonderful aroma and unforgettable taste. Or use it in place of high calorie desserts, since its natural sweetness will satisfy even the most demanding “sweet tooth”.

My mom is attempting to switch from coffee to tea. She loves loose-leaf but she pretty much won’t make it unless I am around. She’s convinced that she’ll mess them up, but really I think she just likes it better when I make it for her! So bagged tea it is. This is one of the ones we picked, because I thought it would taste like one of those fancy coffee shop lattes.

It certainly smells like a latte! Very strong caramel and vanilla. There’s zero discernible tea smell. Worrisome! But the taste is, like, the exact opposite. Strong tea flavor, though it’s that generic black CTC taste. No real depth, but very strong and brisk without being bitter. The vanilla and caramel are really toned down in flavor, in fact this smells a lot better than it tastes. It’s not bad, and I certainly don’t mind drinking it, but I wish the vanilla/caramel was a bit stronger.

Perhaps a longer steep, but the base is already so assertive I worry about it getting bitter. Maybe this would be best as a latte? Or made in a big mug with a bag of earl grey!

This blend usually gets passed over in favour of Vanilla Chai when I’m in the mood for a vanilla tea, but every time I have it I remember that I really like it. The smell can be a bit strange, I guess, but I like it. It’s a smooth caramel-y vanilla black tea that tastes great and goes well with a rainy, cool kind-of-almost-autumn morning.

My love of vanilla will send me in quest of new and diffrent teas anytime. This isnt bad, but its certainly not a well balanced medly of tea and vanilla, like the best are. This is pure bottled vanilla, heated up and poured into a teacup. A little bit fake tasting. But it certainly smells like its advertised to. No balance, in this cup.

i am about to try silk road’s ‘vanilla plantation’….. it seems to be a vanilla day!

you need to taste Vanille des îles of Mariage Frères so…

I brewed this tea on the lower end of the recommendations, 2 minutes, and it was quite strong black tea flavor with a nice sweet aftertaste. I think I’ll go back to my previous brewing method for this tea, around 1 minute. At a minute it is simply deliciously decadent. I used to drink this while living in france as my Afternoon tea with delicious tea cookies to dip in it. I think I drank the tea more for the cookies than the tea, but at least it brings back fond memories!

Backlogging: Purchased some bagged teas while away last week, and this is probably my favorite of the bunch. The tea is not bitter and blends well with the flavorings. I added sweetener, and while I think Upton’s Creme Caramel is better, this is ok in a pinch.

Boiling 4 min, 0 sec
Yours I Like This
7 likes
1 comments
Edit

Cheryl, so happy to hear you did enjoy our Vanilla Caramel
Kathy for Bigelow Tea

I love vanilla & caramel & together they are wonderful! I came across this tea by chance & I was itching to taste it. Good choice.

It’s not a go to flavor that I have to keep on hand all the time, but every so often I look for it. And I normally have it tucked away in my desk at work.

I love the smell as it’s steeping. And I like the taste. It’s smooth & creamy & not overpowering. It’s a mellow flavor. Not overly strong or bitter.

I happen to like the Vanilla Chai as well. Guess I should post a review for that one.
Bigelow makes some good teas.

Same! I used to love them!

Like a chai without the added spices, this tea is fabulous with milk, and satisfies any cravings for something sweet and creamy. Between this and the Eggnog’n tea, I’m all set this winter! This almost replaces hot chocolate. :)

(thinks to self) steep this and add hot chocolate mix if you’re out of milk… hmmm…:)

you know, that actually sounds awesome!

Or just steep it in the milk to give the hot chocolate more flavor- kinda chai-esque in preparation.

This one was part of a variety pack, which included vanilla black tea and decaf vanilla black tea, that I got in a set of four Bigelow variety packs for Christmas from my grandma. I quickly drank through first the decaf vanilla black tea, because I don’t have a lot of desserty non-caffeinated teas, then the vanilla black tea, because even though vanilla was overwhelming to the tea and kinda fake tasting, it still made for a comforting warm cup convenient because bagged. But when I tried this one the first time, thinking it would be my favorite of the three because I love caramel, it was very bleck to me in both smell and taste. I wondered how I would finish the remaining five bags of it. I even thought about foisting it off on my mom via leaving them at her house in her miscellaneous bagged teas jar (for when there are only a few bags left in the box so the box can be recycled and new teas brought to replace). But I thought after enough time had passed, my memory of disliking it would diminish and I would try it again.

Recently, I noticed at my mom’s house on some of the other Bigelow teas (namely the variety pack including English Breakfast, Earl Grey, and Constant Comment) that the teas were too strong for me and decreased the steeping time thus enjoying them more. The other day, looking for the quickness of a bagged tea, I pulled this one out and thought hmm maybe it’ll be better steeped on the lowest end of the recommended steeping times range but I was doubtful. But glad to be proved wrong when it was! Don’t get me wrong, this will never be a favorite among bagged teas, but it was much more drinkable and I finished the whole cup, which I did not the previous time I had it. I will easily be able to finish the rest of the bags when the mood strikes me now, and feel oddly victorious about this discovery.

This tea still gets a 40 (low end of decent bagged teas range) but it would have gotten a lot lower had I logged and rated it the first time I drank it.

I finally have a new tea to review!

I got this for the office, AKA teabagtown. My coworker had just heated up a bowl of what must have been musty feet and trash from a seafood restaurant. I dropped this teabag into the cup and the most wonderful smell came out, saving the day. It smells like butter toffee.

The black tea base is nothing exceptional, but the flavoring is great (but mild). Not very artificial and really helped along by that sweet buttery smell, like cookies in the oven. I’m glad this was on supersale at my last grocery run because it is so much better than expected.

I was pleasantly surprised by this one too!

[Backlog] – I’ve had this tea a couple of times and this most recent will likely be my last. It smells like it’s rich, creamy and sweet.. but the taste offers something different. The flavor is just a bit too artificial for me. I do like flavored teas, but this one is a bit too fake.

Boiling 1 min, 0 sec
Yours I Like This
4 likes
0 comments
Edit