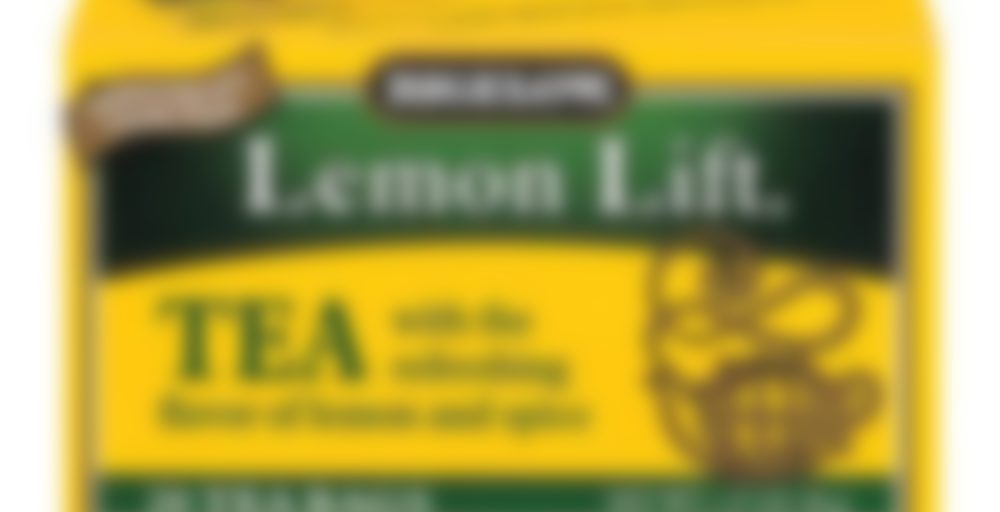 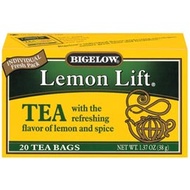 with 58 Ratings Rate this tea Rate This Tea

“In Lemon Lift, we blend the finest mountain-grown tea with just the right amount of lemon and a dash of spice…It is deliciously refreshing hot or iced.”

Sipped throughout the day, tea quenches, soothes, satifies… and delivers healthful antioxidants. We have blended this tea with just the right amount of lemon and a dash of spice. It is deliciously refreshing hot or iced. 20 individually foil wrapped tea bags per box. 6 boxes per case. Net Wt. 1.37 oz. (38g).

I’m so glad I decided to pre-set the Breville with this last night. I’ve woken up feeling rather “off”; wouldn’t say sick, exactly, but definitely not 100% myself. This tea is very soothing and calming. I really like the way the lemon, spices, and tea blend together in this one. I’m definitely going to be looking for this in decaf next grocery trip, as I think it’d be a perfect nighttime blend.

Upping the rating a bit; it deserves it.

Boiling 3 min, 0 sec
Yours I Like This
9 likes
1 comments
Edit

So glad to hear you love Lemon Lift. Do you know Pat Benatar? She demands this tea right before she goes on stage…just a little tidbit of info for you :)

The February Backlog: From the 1st to today.

I’ve drank this before already but not logged it. I’m giving it a 50 (nice bagged teas 50-60, drinkable 40-50). It’s fine when it’s still fairly hot, but as it cools, I don’t like it too much. It gets sour/bitter/overspiced tasting. I made it for an easy cup to drink while I was making dinner. I’m pretty sure I steeped it the full two minutes. So maybe a minute and a half or just a minute next time.

I found myself out of Lady Grey, but this is a suitable replacement. The lemon and spice flavor is soothing.

Sipdown! I’m tired, so I think I just want bagged tea with supper. Actually making the meal itself was exhausting enough, I don’t know if I have the patience to make anything really finicky.

I was craving lemon, and the only other lemon tea I have lying around that’s bagged is the Lipton Lemon that I keep around for guests – and that stuff is just disgusting. So, I settled on this.

The dry leaf smells more like spice than lemon. Although, steeped it smells actually quite lemony. First few sips aren’t half bad – the lemon doesn’t initially taste artificial or “neo citron” like, and the spices are pretty well balanced. Something in the back of my head is telling me I didn’t like this one though, and that I had some left not because I was “reserving it for later” but because it took so long to drink the box and I’m putting off finishing it.

Oh. That’s why. I’m like a third done the cup and only now am I really being hit with the aftertaste. It’s this really overwhelming spicy flavour with bad artificial lemon taste, and it’s sort of making my tongue feel a little bit scratchy (if that makes sense). Bleck. It’s sad, because the initial taste isn’t really so bad – but the aftertaste (which is really quite delayed) ruins any potential this tea had.

Before it’s brewed, right out of the envelope, you smell more of the spice than the actual lemon. However the lemon smell really comes through after brewing. It has a very refreshing citrus taste that isn’t at all overpowering. Also, it doesn’t leave a yucky aftertaste like some other lemon-flavored teas leave. It’s delicious with a bit of honey and I imagine this would be a good tea to drink when you’re under the weather.

Somewhat bland – some aroma of lemon and a faint taste of it, even though I steeped it an extra minute beyond the directions. I don’t taste the black tea at all. Real lemon is not used, but soy lecithin instead. I doubt I will finish the cup. It is not offensive, just bland. Apparently today is not a good day for trying new teas. I have liked 0 out of 4 new teas so far, though Numi golden chai was okay.

I LOVE this tea.. it is like lemon cake, or lemon doughnuts (not the powdered ones, the plain ones).. its so perfect on a cold rainy day… mmm..

I’ve managed to catch another cold. :/
So I had a cup of this tonight, as I was craving something along these lines. The balance between tea flavor and lemon is ideal in this, I think. Neither are too strong, leaving this cup tasting mellow, clean, and soothing. It made me feel a little better, until I found the bottom of the cup…

Boiling 3 min, 0 sec
Yours I Like This
3 likes
1 comments
Edit

Hope you are feeling better. Glad Lemon Lift could help!

I had a cup of this the other evening, at my mother-in-law’s house. It was a good tea. I think it would probably be excellent with sugar. And I see from the reviews a lot of folks turn to it when they’re not feeling well—which seems like an excellent idea. Good cup.

When I first opened the foil packet this tea came in, I was astounded by the fact that this tea smelled very much like Apple Cider, but with lemons instead of apples. After steeping the smell was even stronger!

This tea is a real delight to drink, and it does, indeed, remind me of fall weather. It makes me long for the return of the school year; I feel like I should be drinking this to support me as I study, wearing warmer clothing.

Again I love the addition of the black tea to this other Bigelow tea (the other one being the Plantation Mint) which gives me a good caffein boost and kicks the flavor of the lemon up quite a great deal. This tea tastes great hot, and the name doesn’t do this fact justice; I believe that Bigelow really should change this tea blend’s name to Lemon Cider, as that’s exactly what it tastes like.

The only reason I have a slightly lower score for this blend instead of Plantation Mint is because of the lack of actual lemon in this tea. Even though it certainly tastes like the real thing, I bet the flavor would have been very much improved if it contained some actual lemon peel instead of soy lecithin.

These two teas were my favorites before I got into loose leaf. :)