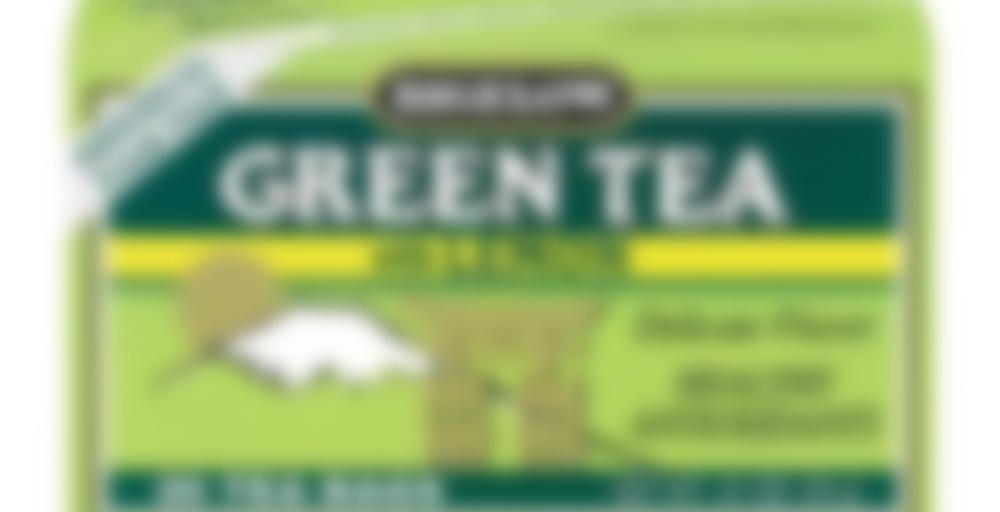 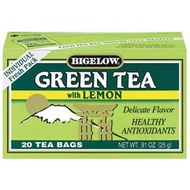 One of the fastest growing teas in popularity today is green tea. Here, Bigelow presents a delightful variation on this oriental favorite—Green Tea with Lemon. The refreshing taste of lemon adds a zesty note to the delicate flavor of green tea.

Had this as a little afternoon pick-me-up. This teas is mostly lemon and not very much green tea. Which isn’t bad. I think it has a very pleasant flavor and it really tastes like lemon not like lemon flavoring. I am not sure I would always enjoy this tea (I think i would have to be in the mood), but today it really hit the spot.

So glad the tea hit the spot for the afternoon! Hope you enjoy it in the future too!

Thanks for making yummy tea!

I am using this tea as a pick me up as I have a lot to do today. My new sofa is arriving tomorrow which is two weeks earlier than stated so I am running around like an idiot trying to get rid of my existing sofa’s and make space in the process.

As stated on the back of the packet it says to steep this tea for 3-5 minutes.

Taste: Although the tea smells quite strong the taste is much more mild. Very pleasant and refreshing, light with a touch of sourness. I would say it’s a good combination between the green tea and the lemon as you can taste both quite equally.

What a wonderful review….thank you so much!
So happy you enjoyed this flavor,
Kathy for Bigelow Tea

i like this version of green tea. very light. had a cup a couple nights ago.

This is my go-to teabag tea. It’s not great, and I don’t enjoy it anywhere near as much as my loose leaf varieties, but it’s a decent tea for me to drink while I’m on the run at work and is also still decent when it’s cold, which is very helpful. I brew 34oz at a time w/ 2 tea bags in a Nalgene bottle 2-3 times per day.

I mainly drink this one at work. With lemon that is a plus? Opening the bag you can smell the lemon in the tea bag. Yet after stepping it that is a different type of tea all together. It taste no more or better then the Green Tea that Bigelow makes. It says lemon on the packet, but yet I taste no lemon. So if I can smell it but not taste, then my question is where did it go?

tea from friends
two packets of this tea were given to me by a friend to help get over being sick. perfect for a cold & rainy night spent in the studio working. drinking out of a handmade chinese tea bowl made for me by another dear friend

Oh no, not Bigelow! Haha just kidding, it can hit the spot sometime ;)

comes out of hiding once more

So, guess what. I just started drinking tea again. COVID has hit me hard, guys. I’m not saying I have or had it personally. I don’t know one way or another on that. I had a possible exposure this past Monday and have been self quarantining ever since, and have taken the chance to dig back into my tea stash!

Anyway, this one here I wish I could give you better info on. All I know is that my darling mother has been leaving me jugs of this at my door (which I then come down and retrieve once she leaves) that she brewed in one of those old 90’s (?) Ice Tea Maker machines. You know, the ones that brew Ice Tea sort of like Coffee? Anyway, I believe her bag allotment is 8 bags per batch, but I don’t know any measurements past that. I do know it’s technically brewed hot, but you brew it into a jug of ice which then cools it down.

Anyway, enough about the method, on to the tea!

This tea is… well it’s not the best. It’s not even what I would call good. But it is passable. Once upon a time I would have relished this tea, but my tastes have grown more complex since then. First of all, I have to add 2 splenda packets per glass to make it drinkable (for me). Once that’s accomplished, it is refreshing, but only bears a passing resemblance to tea. I can almost taste a ting bit of green there, and the lemon… well, I know the lemon is there but it’s more like an essence of lemon than any actual lemon flavor. Like there’s the tiniest bit of tart on your tongue, but it’s only a whisp, and you can’t quite pin it down as actual lemon. I personally like a bold Citrus Green, but this ain’t it.

All that said, I’ve had worse Bigelows. The Pomegranate Green that my father chugs is far worse than this, but I adore their EG. It seems that you have to judge each of these teas individually. None of them are remarkable, I’d have to say. But each has it’s merits. The Pom Green’s biggest merit is it’s liquid. This one is that it’s actually refreshing.

I’ll keep drinking it as long as I can. Someday, I’ll get the patience and resources to cold brew my own tea. But for now, this works.

Welcome back. It’s completely okay to take breaks from tea. It is not mandatory to drink tea. Sad it isn’t that great tea as it could be, but it is nice that someone else is thinking of you :)

Either the box I got was just old or this has no taste or it just tastes bad to me.

I really enjoyed this tea. I wasn’t expecting to get as much natural lemon flavor with this one, but was pleasantly surprised. I added honey and it was the perfect remedy for a sore throat!

This tea comes with lemon peel already inside the tea bag, which gives the brew a delicate note. However, I find that the lemon essence is not to my liking, so to make it stronger I add a slice of lemon from my refrigerator while it is steeping. This seems to give it a lot more flavor, and it complements the green tea nicely. This tea does not at all need to be sweetened, but if you are trying it for the first time you may want to add a little honey.