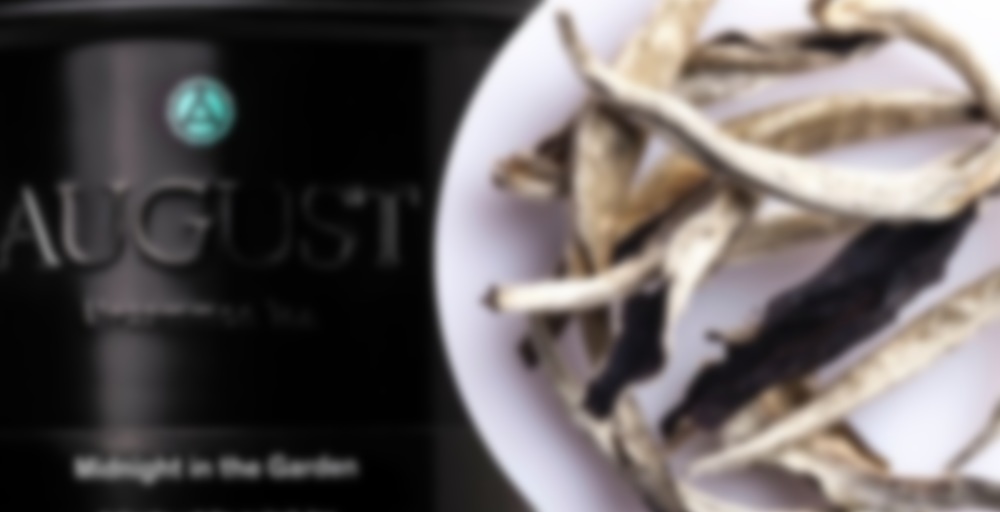 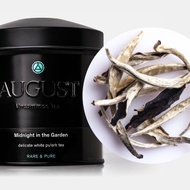 Midnight in the Garden

by August Uncommon Tea
78
You

This tea is a very special pu’erh tea, fermented Chinese tea. Most pu’erhs are shaped into disks and dried in the sunlight which create the characteristic dark leaves and earthy, pungent aroma. Moonlight White tea is gently processed under moonlight as close to the full moon as possible. Then it is finished in a dark room to preserve the light oxidization which gives it a light fruity aroma. In a dark container, this tea will continue to slowly ferment over a long period of time.

Girl in the Garden

Evening In the Garden

Meet Me in the Garden

Not sure what prompted me, back in 2018, to order a plain white tea from August Uncommon Teas (a company known for blends), but I suspect that it had to do with the fact that, back at that time, all their flavored teas were in massive 100g size tins but this tea only sold for an ounce.

I first made a batch as cold brew, but it turned out super weak with my typical parameters… it just tasted like water to me, with an inkling of a citrus-hay note in the background. I increased the leaf for the next cold brew pitcher as an experiment to see if that gets some flavor out of it, and will have to see what tomorrow brings on it. I usually love cold brewed greens and whites, but maybe this one just isn’t cut out for it…

So this morning, I decided to drink it gong fu.

The liquor smells wonderful. There is this effervescent and sort of vinegary-bite to the smell alone that makes me think of wine or champagne. There is an autumn leaf aroma, but somehow more golden and sweeter, like it is mixed with the scent of honeyed fruits. Unlike the cold brew, there is definitely flavor here. The main sip is filled with the flavors of honey, dates, hay, and autumn leaves, with a sort of dandelion blossom floral/pollen note at the end of the sip that lingers on the back of the tongue. There is a hint of melon there as well. The second steep brought out a fruitier flavor, tasting of dates, nectarine, and raisin, still with a strong hay/floral/pollen flavor in the close. On steep four, the flavor was starting to be less intense, but that also brought out a strong peach/nectarine note. The flavor was quite delicate by the fifth infusion, but I did a sixth just to use up the water I already had heated.

A nice aged white… at least prepared warm. Jury is still out on cold-brewing.

This sounds nice! I’d love to be able to catch all the nuances in white tea that folks write about, but I think my tastebuds have been dulled for life by too many years of strong black stuff!

I have found that I just can’t warm up to puerh no matter how much it is considered the “classy tea drinker’s choice,” but have really been enjoying aged white tea. Though I find it takes gong fu preparation to really get the most out of them, and I nearly never have the time for that. I tend to only have the time to western brew a big thermos to last an entire work day, or to dump tea in cold water and leave in the fridge overnight.

Ditto. Someday when I retire, I shall learn to gong fu properly, but until then, if it won’t work in a steeping basket, it’ll just have to wait :)

This is a nice one to drink all afternoon. It’s a white puerh, and it’s not my absolute favourite one (I have a cake of my fav!), but it’s nice and sweet and the leaves look cool.

Full passing points in white tea blends done right in my book. I appreciate it so much because white tea is rather difficult to process, so not only was this one completed pu-er fermentation style, it was done with a well selected combination of flavors.

When hot you can enjoy a bold white that holds interests yet keeps its mellow elegance. In a cold brew or iced tea its a lightly refreshing guessing game of fruit varieties. (those cucumber notes really balances things well). It’s pretty loud and has personality for a white without compromising the nature of the tea- a perfect blend of east meets west.

dexter sent this one my way and i’ve had it a couple times now. I’ve come to the conclusion that this one isn’t for me. It’s a lovely moonlight tea, but it’s not strong enough for me. Light hay taste even though longer steeps and subsequent steepings. thank you so much for letting me try this one dex!

As you all know, I’m a HUGE moonlight fan. So of course I had to pick this up with my last August Uncommon order.
This is a good one. Light on the hay, some apricot, some honey, nice mild, no bitter. I am drinking this gongfu tonight and I feel like I under leafed it a little, maybe not quite as deep as I would like. I used boiling water with flash steeps and it’s just a little flat, I think a little more leaf will fix that.
This is not my favorite moonlight, and it’s pretty expensive. Happy with it but not sure I would buy more at this price.

I’m enjoying my staycation so far; I’ve got a handful of different things planned throughout the next seven days but today is all about tea, being lazy, and reading comics…

So, I combined those things into some sloppy Gongfu with a standby favourite Moonlight Pu’erh – in fact, possibly the first Moonlight Pu’erh I ever tried? It’s easy to steep, so forgiving, and has some lovely flavour notes. The tea is sweet and medium bodied; pleasant white peach meets fresh cream, cucumber pulp, & straw. Very easy sipping!

I combined this with a new Flash comic – I’ve never been a DC fan but something about Flash speaks to me more than other DC heroes so I decided to dip my toes in, so to speak, and see if I can get into this comic. Not that I needed a new series to get hooked on, but, well… Oops.

I also had some slightly under ripe tamarillo near the end of my session. It was the first time I’ve tried one and I found it had a bit of a guava/tomato/melon type of flavour, with a little bit of mild sharpness/dryness. It was actually a good offset to the sweetness of the white tea, with it’s peach and hay notes. Not a perfect pairing, but not half bad either.

I found this tea in the Beginners Puerh TTB. I actually have to credit Just John a bit for my new found love of whites, the moonlight variety especially. We swapped and he sent me a moonlight white that opened my eyes to the possibly depths of flavor there.

Full disclosure: I was giving my wife a back massage using a Lavender and Chamomile massage oil and I brewed this tea as the “finishing touches” to the candle lit spa like experience. So, while drinking it, I believe the scent and possibly by extension the taste was a bit marred by that.

Overall, I was a bit underwhelmed with this tea. There was some nice flavor, sure. But it didn’t have an oomph or wow factor to it. I’d like to say it was delicate but I don’t want to confuse delicate for slightly bland. And again, perhaps the tasting was altered by the scent on my hands. Perhaps I just didn’t get the brewing parameters right. But, I don’t have any more sample on hand to play with and quite honestly I’m not sure this tea has convinced me to buy some in order to play with it. Especially not for the price I’m seeing it listed at.

I’m not usually this harsh on reviews but I was excited for this one and ended up not feeling it.

Dr. Jim, you read my mind. How many folks give their spouse a back rub with the whole spa experience?

Haha. Yeah, well she is pretty amazing and treats me very well so I try to keep her happy. Massages are one of her favorite things ever so I actually took a class a few years back to learn some different massage techniques. Hate to have that go to waste so I usually give her a massage a few times a week, give or take. I just like making her happy.

Here’s Hoping Traveling Tea Box
There was 1 cup left of this tea so I was grateful to have the privilege of trying the last of it. It was delicious. It didn’t have a Pu-Erh taste at all, which I really enjoyed. It tasted like a great white tea. Honeyed hay and sunshine, or moonlight I guess. I enjoyed the hints of nectarine that ended the sip. Really good. I would definitely recommend it.

(I listed peach as a flavour, but it was actually nectarine which wasn’t a option to choose.)

Here’s Hoping Traveling Teabox – Round #5 – Tea #43
First, the leaves in the sample do not look like the picture – that has solid sickle shaped leaves. The sample is mostly crumbly tiny leaves in green & black with a few sickle shaped white leaves here and there. Regardless, I love the story that this tea is processed during a full moon in the moonlight. AND it reminds me of Butiki’s White Rhino in flavor, so that is always a plus. It’s a really nice flavor profile – smooth, honey, hints of hay, some sort of light fruit. I definitely recommend trying the last steep at boiling… the flavor is even more pronounced and delicious, while still being smooth. Rather than a sheng it’s like a really light black tea. I love the slow flavor change from steep to steep.
Steep #1 // 30 min after boiling // 2 minute steep
Steep #2 // 20 min a.b. // 2-3 min steep
Steep #3 // couple min a.b. // 3-4 min steep
ETA: I’m laughing that the description mentions it tasting like wet limestone…. not sure how I would know what that tastes like.. haha.

A white pu’erh? Sounds exciting. To me it tastes like a bolder cup of quality white tea. Not grassy but sunny with a hint of fruit underneath. Not intriguing though. I think perhaps more experienced white and pu’erh tea drinkers would appreciate this more than I do.