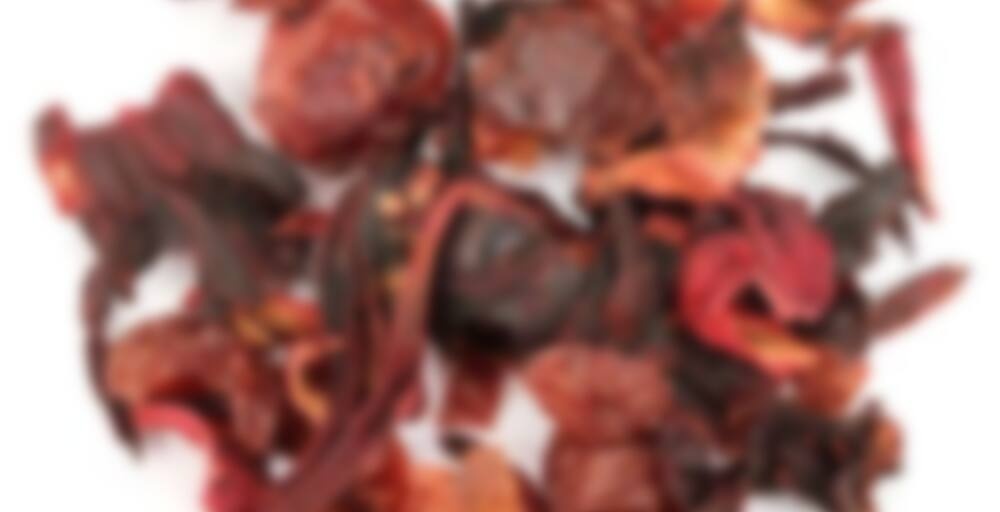 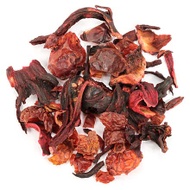 by Adagio Teas
75
You

Berry Blast is a delicious blend of natural fruits and spices that brews up a mouthwatering cup of herbal tea. Entirely caffeine-free, this blend holds a special appeal for kids and sweet-toothed adults. The flavor is all-natural, emanating from black currants, cranberries, raspberries, elderberries, bilberries, hibiscus flowers, and rosehip peels. The cup has a bold and slightly tart flavor, with a juicy clean finish.

The Pleasures of Tea 67

The second fruit mix of my herbal sampler.

Interesting. The Fruit Medley has one more type of berry in it than the Berry Blast, otherwise they have the same berries. But the first ingredient in the Berry Blast is black currants. Are those considered berries? In the sample tin I smell hibiscus, and something winey, which is likely the currants. The mixture is similar in consistency to the Fruit Medley but more monochromatic. It’s all variations on a theme of dark red/purple.

This one does give me the dark magenta liquor of hibiscus mixtures, and a very hibiscusy aroma along with the wine I got from the dry mix and a sweet berry note.

The flavor is a little disappointing compared to the aroma. (I must confess, though, to having had to drop a couple of Ricolas to ward off a coughing frenzy, and I am still getting a residual Ricola head-butt in the back of my mouth. No worries, though. I have enough for at least one more sampling and can revise if necessary after tasting with a purer palate.) Mostly, there just doesn’t seem to be enough of it. I used about twice as much of the mix as I would tea per cup, and it still isn’t delivering a deep flavor.

It’s not overly tart despite the presence of hibiscus (after two samples I’m coming to think that Adagio, at least, has got the proportionality of hibiscus to other flavors right in fruit tisanes), but it’s not quite as sweet as the Fruit Medley. I’m guessing because Berry Blast, mysteriously, has no strawberry where the Fruit Medley does. Dried strawberries should be granulated and sold as sweeteners. Really.

I was hoping for a pronounced wine-like flavor from the currant. I remember really liking the Teas Etc. currant black tea because of it’s red wine without the alcohol flavor. But though I get a wine fragrance here, I’m getting only a slight bit of wine taste, mostly right at the beginning of the sip.

Will have to taste minus the Ricola and see how that changes my current impression, which is that this is good but given that I seem to be off fruit tisanes, not destined for an order any time soon. I’d put the Fruit Medley ahead of this, most likely, and I’m not rushing out to get that one either.

Yep it’s a species of Ribes berry native to central and northern Europe and northern Asia and is a perennial. That’s one of the things I don’t like about Adagio- too many duplicates/near duplicates- this and fruit medley, green chai and spiced green, and masala chai and oriental spice.

I’m trying this iced today as it seems we are finally getting a little Spring here in Upstate, NY! About time too…anyway I’m really get a tart flavor to this when iced and I love it. I can really taste the current and other berries in my cup. I did add a little sweetener to this as it is a force of habit with anything iced. But this is very yum and I really need to get more of this asap. I only have enough left for one more cup and I am pretty sure I forgot to order some in my last Adagio order…

It always starts out well for me with these teas, and by “these” I mean adagio’s fruit tisanes, because I unfailingly adore the scent of the dry mix. This one is no exception. It smells strongly of blueberries, to the extent that I had to double check I’d picked this sachet up and not Berry Blues. I can pick out the cranberries, also, as a kind of red-fruit tinged with sourness. I’m not sure what “natural forest berries flavour” might constitute, but, looking at the dry mix, I’m sure there are at least a couple of things in there that haven’t been explicitly identified. Blackcurrants, for one, I think. In any case, the pieces are relatively large and generous, and the mouthwateringly strong scent is making me really look forward to this. On to the tasting…

While brewing, the scent develops to quite an incredible strength, I can see why it’s called Berry Blast! It’s a lovely, deep, dark, bittersweet forest berry scent. The taste is similar. I can definetly detect the hibiscus, which is what usually ends up ruining fruit tea for me, but it’s not overpoweringly strong. The blueberries don’t really come out in the flavour, but it has a definite blackcurrant-y, wine-like flavour, with the sour tang of cranberry to finish. It’s bittersweet, for sure. The initial sip has quite a lot of natural fruity sweetness to it, but the aftertaste is slightly drying and quite sour. It’s not a bad thing, though, and I’m actually quite enjoying the contrast.

This is another tea I’d like to try iced in the summer. It definetly has the strength to stand up to being watered down a little. I should probably start making a list, because I’ll undoubtedly forget otherwise. Anyway, this is one of the more pleasing fruit tisanes I’ve tried recently. I’m a fan of deep, dark forest berry-like flavours, although the hibiscus does spoil the overall effect. If it wasn’t for that, this tea would be right up my street. As it stands, I’m still on the lookout for a hibi-less tisane. Not bad by any means, though.

Berry Blast. I cannot tell you how little the name of this tea won my favor. Anything called Berry Blast is not going to be a loud favorite of mine. The best it can hope for is guilty pleasure. That said, I have already another hibiscus tea on here and it was rated highly.

The liquor is…well, I mean, come on, it’s a hibiscus tea. It’s deep red/purple, which is unsurprising when you take into account that it has hibiscus and blueberry in it.

The smell is just awful. It is a terrible sort of fruit roll-up dark blue-raspberry nightmare. The brewed tea is more subdued and bearable.
And the first sip…..

…Is pretty damn good. It’s got a dry sour-pucker that lends itself to a certain sort of mood. It reminds me of a less passionfruity version of Tazo’s Passion.

It’s really quite impressive. I still refuse to openly admit I drink something called Berry Blast, so I’m renaming it. Standby for its new name…
Gummiberry Juice. See? Far more dignified and pop-culture-referency!

On this hot summer, nothing like a refreshing berry blast. cold with ice is a very good option. A soft sweet taste.

Got this as part of my herbal sampler pack. Very hibiscus floral, but with a sweet slightly tart flavor that doesn’t get too tart. Little bit of a medicinal cherry flavor, but not too bad; maybe from the forest berries flavoring? What’s nice is it tasted nice hot or cold and with no sugar. Good if you want to add a tarter berry flavor to blends.

This is thanks to SkySamurai! A bunch of single Adagio samples were thrown in the advent package as extra padding. Hey, I’m all for tea being used as bubble wrap. haha. I wasn’t expecting much from this. It looked like mostly hibiscus/rosehips and tasted like mostly hibiscus/rosehips. Where are the BERRIES???
Steep #1 // 9 minutes after boiling // 2 1/2 minute steep
2021 Sipdowns: 5

Very good iced after a tough workout, and with generous honey. Would buy again in 3oz.

I received this sample from a cupboard clearout from Meowster a year ago, thanks Meowster! Since I tend to like fruity herbals like this iced, I used it up as a cold brew. The amount of leaf I had was able to brew up a liter and a half of cold brewed iced tea.

This is your typical dark red hibi-hip fruit tea; I don’t add sweeteners to my hibi-hip teas (since I actually like the tart/tangy notes of hibiscus and can take it like a champ) and have to say I actually find this one relatively sweet, myself (hibi-haters would probably disagree with my assessment, though). There is a slight bit of fruity tanginess toward the end of the sip but mostly it comes off quite sweet and punchy to me, and I’m getting notes of blueberry and a pithy sort of raspberry specifically, with a more general red berries/fruit punch flavor.

It’s a fine iced tea for folks like me that enjoy fruity hibi-hip teas. And for those that don’t like a certain red flower, I’m sure it’s “overly tart” and “hibiscus ruins everything” and “why can’t they just make fruit teas that don’t have hibiscus” blah blah blah I’ve been trying to catch up four months worth of Steepster reading for ages now and probably need a break because can you tell I read that a lot? I read that a lot.

Well, I thought this was fine, at least, but nothing that particularly stood out from any other fruity hibi-hip tea. I’m glad I got to try it, though!