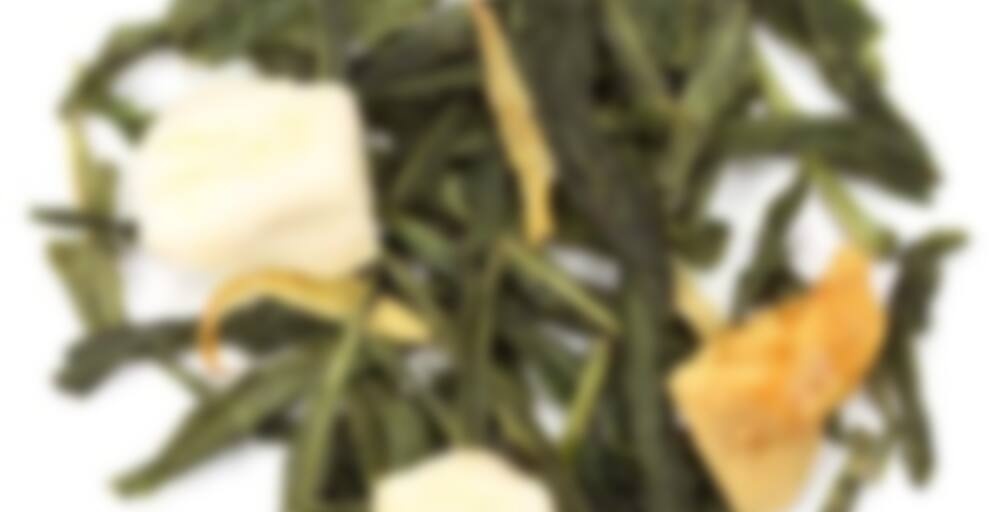 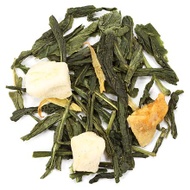 An ancient Hindu legend recounts the story of the mango tree growing from the ashes of the sun princess who had been incinerated by an evil sorceress. When the mango ripened and fell to the ground, the beautiful sun princess emerged. Our new Mango Green Tea combines the goodness of green tea with the flavor of perfectly ripened mangoes. Sun princess sold separately.

I would probably liked this tea better if I hadn’t tried TeaGschwendner’s Cranberry Mango green first. It is a nice tea, not too artificial though isn’t exactly mango tasting. It is lightly flavored, fruity, easy to drink and very thirst-quenching. TeaGschwendner’s on the other hand has real bits of mango and cranberry in it and thus produces much richer and more realistic flavor with tangy notes.

Dry tea smells delightful. Fruity, perky and promising. 170/1.5 min. Not so fruity scented now, nor in the taste. Perhaps this would make a better iced tea. I didn’t really dislike it hot, but it didn’t seem like a mango taste to me. It was more of a cane sugar taste without the overwhelming sweetness. More syrupy tasting. I wonder if it would diminish when cooled.

I was a little hesitant in ordering this tea based on ratings on Adagio so I went with a smaller tin…now I wish I ordered a bag! Currently replaced my other daily favorite of Citron Green. I usually go for a couple of cups of this in the morning. It’s fruity but not too fruity. Very lightly flavored.

Light, different, and just what I needed.

Just had two small pots of extra strong overbrewed black tea — so I’m switch over to something light and fruity.

This a second mango green tea I have tried. It seems to me less like mango and more like pineapple or a similar flavor. Overall it’s not bad, just not for me.

I think I’ll leave off a score from this one since it’s rather old. I’m finally nearing the end of the over two pounds of tea meowster kindly sent me this summer. I’ve mostly been sharing this one with family members since I’m not a big fan. There’s a murky green tea flavor, but for me, it’s missing any distinct mango flavor. Adagio has some green teas that are quite nice, so it’s possible this one was too in its prime. As it is, it’s not too pleasant. Mango seems to be a flavor that’s difficult for teas to capture in a totally satusfying way.

I think this is my favorite fruity green tea. It’s not over powering. Great for summer!

Refreshing, primarily tea taste with a hint of mango. I think the mango flavor could have been stronger, but it was so refreshing I drank my whole sample packed (which I had prepared iced) in one day which is uncommon.

This is why I always return to Adagio for teas I intend for iced tea. They are just so inexpensive, the quality really isn’t terrible most of the time (cold brewing the blacks is the way to go), and I go through iced tea SO darn quickly I really need to be economical. Their points system trumps the rest, too, if you can remember to “share” a cup you are drinking daily for 2 points. I normally spend well over my points with them each year, but I would say the rewards points alone fund 70% of what I receive.

From the Small Big TTB

WOW there is soo much tea stuffed in that little box. Because half the samples were wrapped in foil that actually forced me to actually go through the entire box to find things. I ended up sticking labels on the outside of the foils for easier access, but it’s actually a pretty smart idea, it forced me to look at what I was looking at instead of just wandering through the box randomly or skimming just the top of the box.

Mango green. Sadly it seems after a few months on Steepster I’ve developed this view of Adagio in my head that isn’t entirely complimentary. The least of the offenses I’ve heard them cited for was under-flavoring and entirely artificial tasting additives. Well this tea didn’t entirely dispel those ideas, but the result wasn’t as bad as I had feared either.

I was distracted and boiled water. I think I had intended to make a black tea but for some unknown reason went with this instead. Surprisingly the results didn’t taste burnt at all. So ~210*F for 1.5min, then into a happy little thermos. I told you I was distracted. Usually the thermos is pretty leak proof… but not so when the lid isn’t properly secured. Hot water all down my leg. Ouch. Surprisingly I didn’t lose that much tea, but I decided that hot water wasn’t my friend this morning. I had some cold tea from the fridge and came back to this later.

So it’s a mild green with milder mango flavoring. Honestly I could barely smell the mango, and I pretty much didn’t taste it at all. The tea was still hot, so it’s not like its composition changed all that much in the time I left it in the thermos. That being said, it’s so entirely average that I would be hard pressed to call offensive. It has no WOW factor, and lacks even enough interest to consider it as a good daily drinker (for me). I might offer it to a child or someone that doesn’t like strong teas.

I just love the smell of this tea!^.^ The flavor is really pretty light..