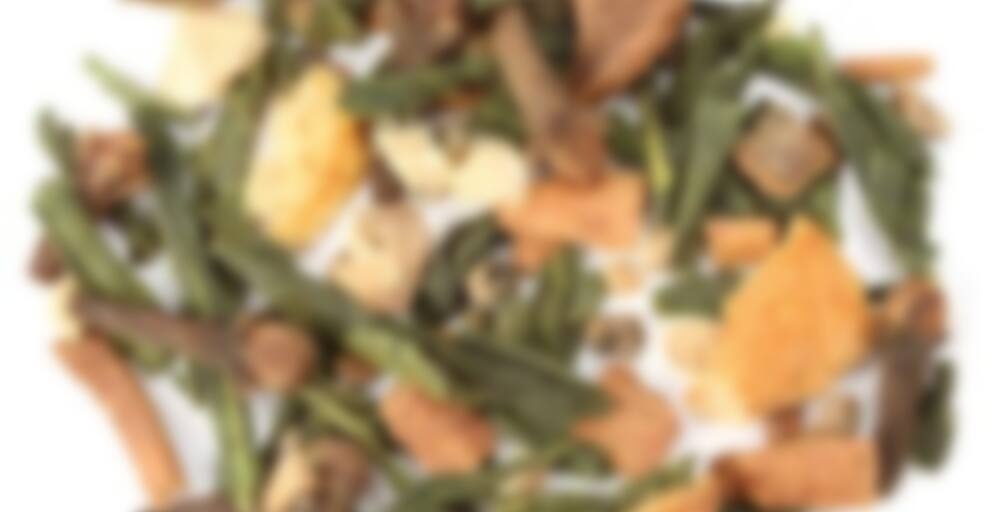 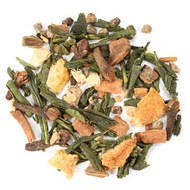 by Adagio Teas
72
You

Our smooth China green tea with a chakra warming spice combination. Its natural sweetness and fiery kick will bring you back to center, no matter how polarized you’ve become. OOMMMMM OOMMMMM

We suggest two heaping teaspoons per 6 oz cup. 3 min at about 180 degrees. Sugar, cream or soy if desired.

Sipping this while watching the kids’ kung fu lessons. It’s a little weirder this time than last. With these chunky mixes I think a lot depends on what actually gets into your filter to steep. The spices are a little stronger at the expense of the tea flavor this time, but not enough for me to mark this down.

I may try the rooibos vanilla version tonight. I’m pushing it as it is drinking caffeine this late.

cool :) i’m not much for chai tea. only this one. http://steepster.com/teas/tim-hortons/5895-chai-tea

i may try green chai sometime :) (had to fix error)

I finally got around to opening and trying out the chai sampler from Adagio… starting with this one – Green Chai aka Bengal Green Chai. One thing I noticed about most chai blends is the amount of spices in the mix. I am almost tempted to pick them out and put them aside to use on different occasion. You can bring out so much flavor with not so many spices. This one had a decent amount.

I love how the dry leaves are rolled. It is very pretty. Very spicy – cinnamon or cloves. I can smell it from across the room. No need for sugar. Next time I’ll try it with sugar and/or milk! I love to experiment. _

I believe this is the same tea a the sample I was sent titled “bengal green spice”. The picture looks the same as what is in the tin, and the steeping instructions are the same, so I believe they are the same. If not, I will create a new listing. I couldn’t find Bengal Green Chai on Adagio’s website, but a search for it resulted in me finding this tea.

I was a bit put off by the cinnamon flavoring in this tea. It tastes more like cinnamon red hots than like fresh or ground cinnamon. I personally don’t like cinnamon red hots in my tea, but can see others liking this. This is a milder version of Harney and Sons Hot Cinnamon Spice Green Tea. I will finish my sample of it, but it won’t be a re-order for me. I really wanted to like this tea, as I love Adagio’s Oriental Spice, and was hoping for similar notes in this with a green base.

Same tea- no clue why they changed the name… although I think you’re confusing “bengal green chai” and “green spice”… 2 different teas that taste exactly the same just like their masala chai and oriental spice- don’t ask me why they have virtual duplicates.

Ah, that’s it, it’s the Spiced Green I wanted to try. Maybe I’ll have to pick up a sample of that to see if the cinnamon is more toned down. I haven’t tried their Masala Chai, but like their Oriental Spice, so maybe I’ll like green spice better? Who knows. Thanks for the clarification Cofftea!

I’m enjoying the bagged variety of this and I’m impressed. It’s not the best chai blend out there, but it’s spicy and warm, perfect for approaching fall. I upped my rating, as I can enjoy this through the length of the cup. I added some sugar to it, but mainly because I’m craving sugar right now. This cuppa is good plain too.

I tried this again, steeping it longer and at a lower temperature. This time, the spice is mellower, and the tea flavor shines through a bit better. It definitely upped the yummy factor a lot.

Dang. This is not making my next tea order any smaller.

I’m really not sure what to make of this.

It’s green tea, so I should prepare it carefully at a relatively low temperature. But also it’s chai, so I should make sure to boil it extract all the flavor of the spices. Do I add milk? Never for green tea, but often yes for chai.

I haven’t yet found a way to prepare this which makes me like it. But I’ll give it another try or two to see if I can figure it out.

I had the same questions when I tried it. I went w/ 1 heaping tsp for 6-8oz of 180 degree water for 3-4 min, sweetener optional. I’ve even tried it prepared with half milk and half water (increasing the steeping by 1 min) and it was surprisingly drinkable although it’s something I’d never do again… although I assume that someone who enjoys matcha lattes would enjoy green chai w/ milk much more than I do.

I know exactly what you mean about the Adagio chai – the spices are always off. I end up adding more to the point of crafting my own tea! I kept thinking my tastebuds were off; comforting to know I am not alone.

The leaves of this tea smell FANTASTIC, with a wonderful spiciness to them that’s warm and inviting. Unfortunately, I think I steeped them in water that was too hot, because the spiciness didn’t transfer through to the flavor as much as I would have liked it to. Considering how good the leaves smell, I’m definitely going to be giving this one another shot soon, and will hold my judgment until then. (To be fair, the tin does say five minutes in boiling water.)

Boiling 5 min, 0 sec
Yours I Like This
2 likes
2 comments
Edit

I agree Geryd… no green should be subjected to boiling water for that long.

I have always enjoyed stronger teas more, and had a bad experience with chai tea at one point in my life. That being said, I have strayed away from both green and chai tea. This tea was delicious though. A little weak, but I shared it with at least five or six other people and they all liked it. The aroma alone is enough to make you happy.

Umm – you add tea to your coffee?

Coffee+tea actually sounds pretty good, especially with spice teas! I put milk and sugar into everything (almost), so I can understand mixing things.

Oh yeah! When I’m home I’ll make a dirty chai (a common coffe+tea combo) misto by putting double strength chai right in my coffee maker instead of straight water, make it 2x strength, then add equal parts coffee and milk- sometimes creamer too. Right now I have caramel, irish cream, and spiced rum in my fridge. When I go to church, I just fill a paper filter w/ tea and take it w/ me. Chocolate and caramel are yummy too! I don’t take sugar in my coffee (only creamer or black unless it’s a misto or other specialty beverage), but I do love maple sugar black in my coffee.

I really liked this more than I thought I would! The spices blended really well together, and more importantly with the tea. It’s a bit more delicate and smoother than the other chais but still warming, which is something I’m am greatly appreciating on the cold and windy New England afternoon after a horrendous week.
Hey, I didn’t write a novel intro before talking about the tea! Although, story telling is always something that goes with tea drinking.